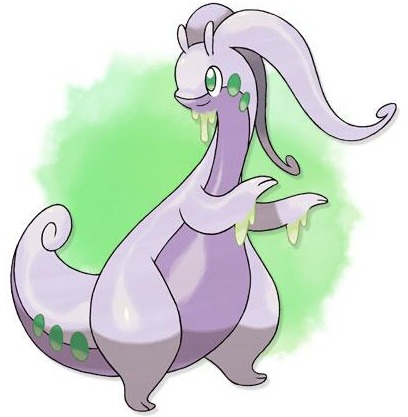 After examining the starter Pokémon from Kalos we now move on the pseudo legendary of the 6th gen, the Soft Tissue Dragon, Goodra. Will it live up to the previous pseudo legendaries or will it be a big messy let down?

Goodra and its evolution line are quite surprising. When trainers first found wild Goomy nobody expected it to be a Dragon-type Pokémon, let alone the pseudo legendary of Kalos. However, this soon changed and trainers around the world began to fall in love with the little slime Pokémon but still never realised its potential. Why? Because its evolved form, Sliggoo, could only evolve into Goodra if it was Level 50 (or higher) and was in NATURAL rain. Naturally, this took a while for players to figure out and thus, Goodra was left out of the early list of known and loved Pokemon. But when it was found, oh boy did it make a scene.

This took TOO long to work out.

Goodra has one of the most diverse and varied moves pools than any other pseudo legendaries before it and each of these setups are as viable as the last. This makes the Gooey Dragon usable in a lot of situations and able to fit on many differing team types.

Goodra has three abilities it can learn, Hydration; which cures any status effect it has while in the rain, Sap Sipper; which absorbs Grass-type moves and raises its attack one stage and its hidden ability, the aptly named Gooey; which lowers a Pokémon’s speed by one stage if it hits Goodra with a physical move. Each of these abilities are useful in varying situations and it is difficult to pick which one is best. Bearing that in mind, we have decided to give examples of three different sets that can use and abuse each of them while using a Goodra.

This Goodra set is all about timing. When you know your opponent is going to use a Grass-type move, you switch into this Goodra allowing it to get the attack boost. Then let it run wild with hard hitting moves like Outrage and Earthquake to dish out some punishment.

Protect is good as it lets you see what your opponent will try to use to stop your Dragons rampage but Power Whip is great for taking out bulky water types which can sometimes wall it. Dragon Tail is also useful if you feel a Pokémon may try to start setting up a power play on you but if you do not fear this then Aqua Tail is a suitable hard hitting Water-type replacement.

As long as you are careful, this setup will making a serious dent in your opponent’s teams, just watch out for physical based Fairy types as they are a great counter to this version of Goodra.

Best used in a Rain based team, this Goodra can take out any Pokémon it can wall. To set up, switch in Goodra when it is against a Pokemon it can handle defensively and then use Infestation to lock the Pokémon in and make it start taking damage each turn. After this Goodra should use Rain Dance to get the Rain going and start using Rest to get back to full health and (since the rain is up) be cured of the sleep condition due to its Hydration ability. If you don’t need to heal, then a Toxic should be used in order to seal the opposing Pokémon’s fate quicker.

If done correctly, this version of Goodra can effectively take out key members of the opposing trainer’s team. Though, if you are a trainer who are scared of not being able to do any real damage then you switch out Toxic for any of Goodra’s attacking moves (like Dragon Pulse). Regardless of this however, the rest of its move set should stay the same.

The items here are to your preference, if you like healing via the Rest + Rain Dance combo then holding a Damp Rock will allow the Rain to be around longer, thus more healing. But if you would like your Goodra to be able to survive a bit better after the rain gives out, the bonus health Leftovers gives is the best option instead.

The big problem with this Goodra build is that physical attacking Pokémon can destroy it and switch out after Goodra is taken down negating the Infestation damage. The other is that, aside from the residual damage of toxic/infestation, this Pokémon will not be doing any damage very fast which means it is a prime target for your opponent to start setting up a Pokémon on, so be wary of that.

This version of Goodra takes the other builds and flips them on their heads. Using the new item, Assault Vest; which raises a Pokemons Special Defence by 50% as long as they don’t use any non-attacking moves, you can build your Goodra more defensively and allow it to come in, take a hit and, using its wide movepool, strike back efficiently to deal some great damage with its above average Special Attack.

Since this Goodra has to be efficient when it attacks, you may favour more hard hitting moves like Thunder and Fire Blast on this set. However, if you fear missing your attacks, then consider using the slightly weaker but 100% accurate versions of these moves. Lastly, Dragon Tail is useful for getting rid of Pokémon that can cause trouble for this build but Sludge Wave can take out some of those new bulky Fairy-types running around, just use what you think you will need most.

The best thing about this build is that nothing is an exceptionally good counter to it. Physical attacking Pokémon will at least suffer due to the Gooey ability and because of the Assault Vest, Special attacking Pokemon will struggle to leave a dent in their slimy foe. The biggest problem this Goodra has is its lack of power, while its Special Attack is respectable, with no investment or item helping it, it will end up not being able to hit things as hard as it should hence why it needs the large move coverage, any attack it does has to be STAB or Super Effective to deal out any real damage.

Look at that face, would you believe it could be so strong?

All in all, Goodra is a fine pseudo legendary Pokémon and should be considered if you are looking for a cute yet versatile addition to your Pokémon Team.

But what do you think of Goodra? What move sets and builds do you like? Let us know what you think of the Slimy Dragon Pokémon in the comments below!