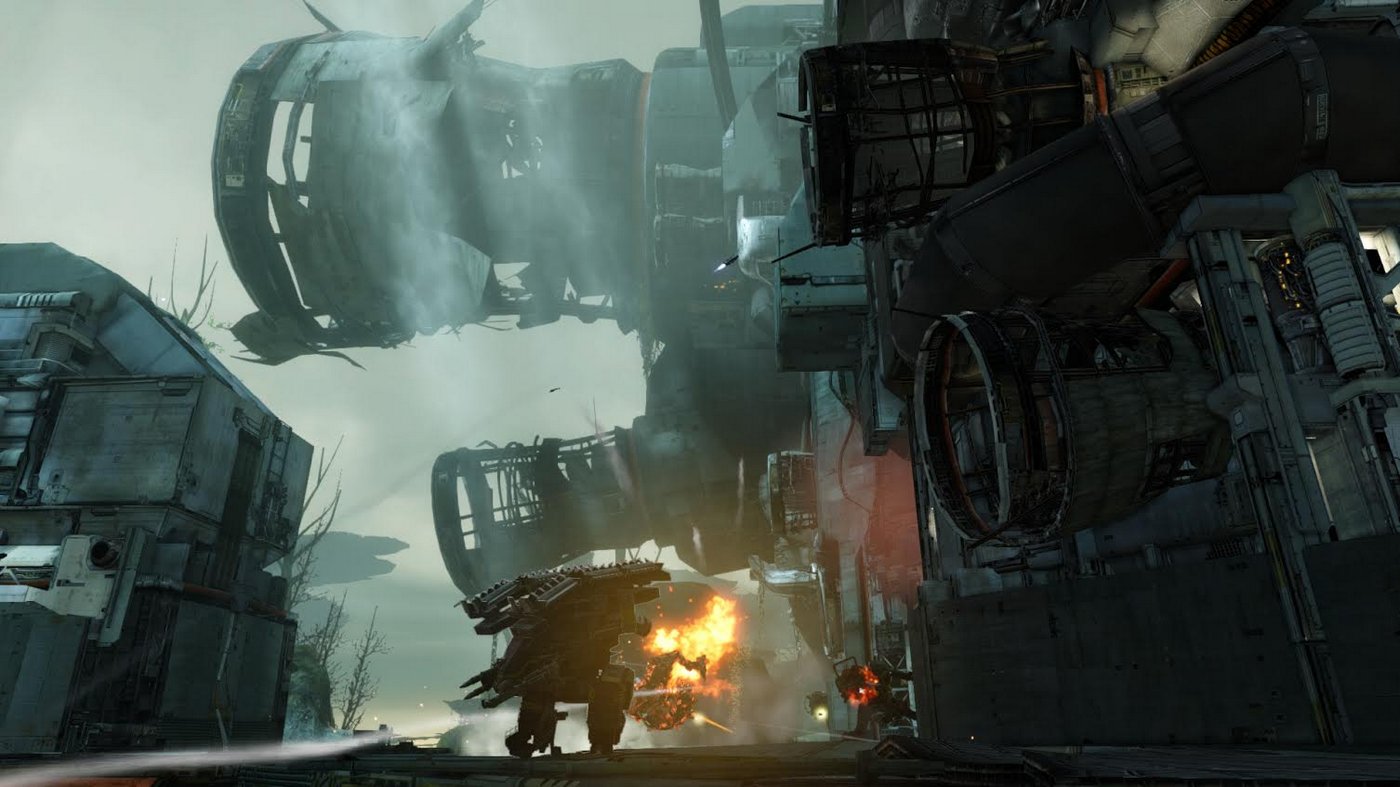 We recently had the chance to pick the brains of the Hawken team over at Adhesive Games to celebrate the release of their latest map, Wreckage. For the uninitiated, Hawken is a free-to-play mech combat title currently setting the PC gaming world on fire with it’s mech orientated spin on the fast-paced first-person shooter formula of titles like Call of Duty. As VGU’s resident Hawken nut, the job fell to me to ask the important questions. The answer was unanimous…Pepsi is better than Coke. Now that the megaton is out of the way, here is the rest of the Q&A.

Q. Wreckage features a crashed ship as its central theme; I suppose the most obvious question would be whose ship was it and why did it crash?

A. MILES: The ship was one of the first United Terran Authority forces that fled the outbreak, right before the quarantine went up around Illal. They didn’t transmit their allied signal fast enough, so they were mistaken for an un-registered pirate craft and shot down.

Q. How long ago did this crash occur, after all a freshly crashed cruiser will leave a very different feel to one that has been sitting in a swamp for half a century, slowly being retaken by the planet?

A. MILES: The crash was only a couple decades ago. The plant life on the surface grows at an aggressive rate.

Q. The space cruiser is described as being massive. Will Wreckage feature any internal sections off the ship or will combat be focused in the swamp surrounding its remains?

A. CHRIS LALLI: A good chunk of the map is actually set within the remains of the ship, so there are a lot of internal sections of the wreckage. In objective-based modes like Missile Assault or Siege there will be reasons to fight both inside the ship and outside in the swamp areas.

Q. We’ve seen glimpses of ships from the HAWKEN Universe in concept art but little else. What were your main inspirations when designing the ship featured in Wreckage?

A. KHANG LEE: Ever since we started working on HAWKEN, I always wanted to see mechs dashing around on a water surface. The image of these heavy machines creating white splashes bursting upward as they boost across the surface of the water sort of stuck in my head. I also love the old Star Wars Dagobah swamp scene. The moody swamp atmosphere creates a nice mysterious feeling. These two visual images were combined and formed the inspiration for Wreckage. Our concept artist Darren Quach also wanted to experience a level with a giant crashed spaceship and the interior spaces within. We sort of just mixed and matched and collaborated to form a crash swamp map for HAWKEN players to fight in.

Q. Many films and games show us the destruction of a ship, but few show us the aftermath of its crash up close. Did you use any other media as reference for the design of the crash site or did you start from scratch and think “right, what would happen if this thing hit the deck”?

A. KHANG LEE: For the visual reference of the ship, we searched through a lot of online images. Darren found some amazing images of ship breaking (salvaging) in Bangladesh. That’s also what our story for Wreckage was based on. Imagine an old merchant ship that was shot down by the Illal planet quarantine. It lays there rotting for years as pirates and scavengers loot and salvage whatever they could find. Similar to time-lapse videos of whale carcasses as a multitude of deep sea creatures slowly strip off every possible fiber and nutrient. We wanted Wreckage to be eerie but beautiful at the same time.

Q. What made you choose a swamp as a location for the crash site? Were you not worried that after releasing a forest based map that Wreckage would be seen as too similar in its aesthetic?

A. KHANG LEE: There is just something sublime about giant, heavy war machines trudging through a thick swamp. It’s not a unique vision but we wanted to express this idea in HAWKEN. Wreckage and Last Eco are quite different in layout and aesthetic. Though they are both naturalistic in theme, Wreckage has many more man-made structures than Last Eco. The theme of Wreckage is nature swallowing up whatever humans leave behind. If left alone, even a gigantic spaceship will become part of nature in due time. Well there’s that and we also just wanted giant robots stomping in mud and shooting the crap out of each other below giant spaceship rocket engines! Hahaha.

A.RICHARD HAGER: When Khang came up with the original concept his inspiration came from Dagobah from Star Wars. With that said, our environment team also used real-world swamp environments as reference. It draws from both elements for sure, ranging from cattails to glowing barnacle plants. As a team we challenge ourselves to keep coming up with interesting and new environments that exceed the previous environment. We, without a doubt, raised that environmental bar with Wreckage.

Q. What kind of playstyles will Wreckage cater to? Is it going to be a close quarters affair, a sniper’s paradise or a mixture of the two?

A. RICHARD HAGER: It’s definitely a mixture of the two. I personally love playing short- and long-range mechs, and this map really satisfies the different playstyles I play. Wreckage has a big section of the map where players will have to battle within the interiors of the downed ship. That section caters a little more toward the close quarter mechs. Step outside and we give a little love to those long-range mechs. All and all it feels like one of our more balanced maps in that aspect.

Q. We recently got the chance to try out HAWKEN using the Oculus Rift and we loved it, especially the feel of flying and falling you get from it. Does the Rift come into mind when designing a map? Do you stop and think “what would look and feel the coolest using the Rift” or do you design the map based on the standard experience first and foremost?

A. JASON HUGHES: We’re glad to hear you had such a great experience with the Rift. The response has been pretty positive and we couldn’t be happier. Boosting up high in the air and dropping to the ground below in particular seems to be something that really sticks in the mind of players. When it comes to map design, we primarily focus on the layout without any art or other aspects being considered yet, so we can’t say that how it performs with the Rift is a primary deciding factor with design. It’s most important to us to make sure that the map flow wells, supports the style of gameplay that HAWKEN brings to players, and of course, is fun to play. If we can be successful with those points then everything else tends to fall into place, including the Oculus Rift experience.

Q. Surely the release of a swamp map and the Predator mech so close to each other are no coincidence? Is the Predator class going to be king of Wreckage and indeed Last Eco, or are you planning on sneaking in an Arnie class mech?

A. CHRIS LALLI: The Predator definitely seems well suited to the forest and swamp environments, and it’s not just a coincidence that they are being released around the same time. But that’s not to say that the Predator really has any gameplay advantage on those maps; it’s just a conceptual thing. The Arnie class mech is in R&D but unfortunately it is proving to be far too powerful for a public release. Just kidding.

Q. Each new map brings us to a more exotic location than the last. What’s in store for us next? Snow map? Volcanic map? Space map?

A. CHRIS LALLI: Well, all I’ll say is that the next new map after Wreckage will be one of those three options…

Q. Are there any limitations to the Unreal 3 engine that stop you doing things you wish you could in HAWKEN, both with level design and the wider game?

A. TYLER BUSER: Unreal 3’s forward renderer further increases the limitation on draw calls. UE3 does have a deferred renderer, but unfortunately it isn’t available for dx9. Unreal also has an over dependency on sight blockers that can inhibit creativity…which is usually solved by more creativity. Performance is always a big issue for us in order to keep players using lower-end computers running. Collision has also been a big factor, which is partly due to performance cost as well, where a more robust and accurate system for the player’s pawn is also more demanding. Having these big mechs race up and down hills, dodging, and boosting takes a lot of work to smooth out all the environments. That said, I’ve worked in a lot of different packages and Unreal has by far been one of the best. In the end no package is perfect.

Q. One of the biggest advantages of PC gaming over console gaming is the modding community. Do you have any plans to release tools for the creation of player-made maps in the future?

A. JASON HUGHES: It’s a feature we’ve discussed, and the fact that this community exists is indeed a highlight of the PC platform. As a Free-to-Play game, we have to consider a lot of game systems for such a feature, and we want to make sure that if we roll it out for players we do so properly. So it’s something we’ve discussed, but we don’t have definite plans at this point to roll out the feature in the immediate future.

Q. Are there any plans to bring HAWKEN to the next-generation consoles, the Xbox One and PlayStation 4? If not would you be open to the possibility in the future?

A. JASON HUGHES: This is a really exciting time for the industry and it’s great to see such energy in the air about what’s coming on the horizon. All the console manufacturers have done an amazing job with their launches and it continues to be a great time for games (and gamers). Releasing HAWKEN on consoles is something we’ve discussed as a possibility for the future but all of our efforts are focused on the PC version we have live right now. We are staying focused on bringing HAWKEN out of BETA and that’s what we have our sights set on, ensuring that players have the very best experience possible on PC!

A big thanks to the Hawken team for giving us their time and answering our questions. For those of you who haven’t yet tried it, I highly recommend you check out Hawken. It’s free, so what do you have to lose, apart from a large amount of your time? Also be sure to check us out on the VGULive stream tonight at 8pm GMT where we will be playing Hawken with members of development team.

What did you think of our little Q&A? How about the new map, Wreckage? Let us know in the comments below.

*No idea if the Hawken team actually prefer Pepsi to Coke, don’t quote us on that.