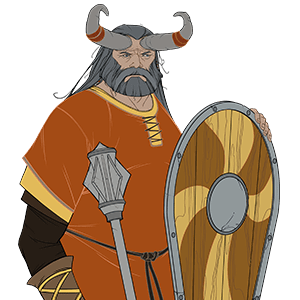 Stoic have introduced a new class into The Banner Saga. Announced on their official site, Stoic’s new Norse-like fights are known as ‘Shieldbangers”. Described as a “living tank”, these horned heroes will be taking on the end of the world with a beefy shield.

Shieldbangers are for all sense of purpose are the games tanks. There three abilities cover all the major damage-sponge basses:

This brings the class count to six, with more promised to be on the way. These should be on their way soon with the The Banner Saga: Chapter 1 out January 14, 2014.

What do you think? Will you be playing The Banner Saga once it comes out? Let us know in the comments.