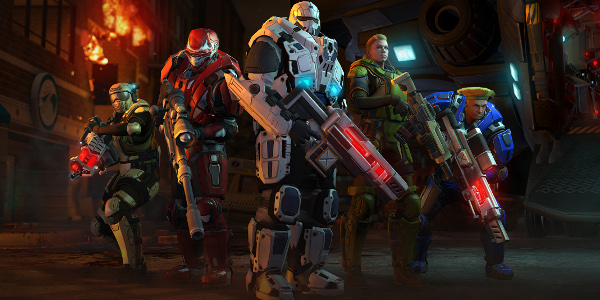 In XCOM: Enemy Unknown humanity martialled itself under one flag, the banner of the XCOM initiative and the protection it provided. While that protective sheildmay have occasionally yielded, unleashing a horror of Greys and Mutons upon the unprepared world, the aliens were pushed back and Earth breathed a sigh of relief. With XCOM: Enemy Within however, things are no longer so simple.

Walking into a swanky bar in central London, with the lights dimmed to a low blue hue, we got to play the expansion to the critically received remake. Sitting next to a display, looping the image of a spinning world as seen from the command centre, we got to play a short demo showing off other new mechanics that weren’t about crushing thin men with mech suits.

We have seen the new aliens and the new tech XCOM will be bringing to meet them in the field. What we played wasn’t any of that however, but something more sinister. Not all of humanity wants you slaying waves of aliens, but would rather sabotage your efforts. EXALT, as they are known, are making an active effort to annoy you as best as they can. Rather than launching a proper offensive, however, they prefer to stay in the shadows, stealing your money and setting you back in other ways. You are notified every time they do so, but it is up to you whether you want to go after them. Track them down cell by cell and you slowly find out where the EXALT base is kept. Destroy the base and you no longer have to worry about them meddling in your affairs. It is a long journey to that point though, along a path that will probably end covered in the blood of your team.

This May Seem A Bit Over-Powered For Men In Suits, But They Will Still Kick You Up And Down The Battlefield

The demo launched with an EXALT agent stealing $200 from the base’s funds. We were instructed to send in an agent to infiltrate the splinter cell who would lay low in the group to bring them down from within. Before we could do that though, we had to pay for the intelligence to find the group. Each intelligence scan needs to be paid for, which is about the same price as a new satellite to add to the network. After finding the cell, we sent in our agent and waited.

Time passed, and a few days later the agent reported it was time to strike. From here the normal XCOM team rolled out to a construction site in the middle of nowhere, one of the many new maps. The undercover agent began on the other side of the map, without armour or any weaponry except a laser pistol. Instead of the usual find and kill objective, the aim was to find and hack two nodes held in the centre of the map. It was shortly into the first turn when EXALT members showed up.

They looked very similar to members of The Bureau, which we were told was a happy accident, decked out in suits and ties along with rocket launchers and heavy assault rifles. It is unknown why they oppose XCOM, but they speak in a garbled tongue similar to the language heard at the beginning of alien turns. The new human enemies immediately differed themselves from the aliens, wasting no time firing rockets, sniping and suppressing the team. While we were only playing on normal, the challenge was more on par with classic. Previous tactics no longer worked as EXALT are much more flexible, and able to counter your squads own abilities. It didn’t feel unfair, but like a new type of fight entirely that would require a more thoughtful approach.

Crawling towards the objectives was a hard trek, and as the agent hacked the first node we were one step closer to victory. More EXALT agents dropped in as the nodes were hacked, having no issue gunning for the agent, on whom success depends. If the agent dies all objectives are failed and the rest of the team must evacuate. Killing all EXALT members didn’t assure victory as more would appear a few turns after you killed the last wave. Even once the objectives are complete you still have to hike back to the exit zone, giving the mission a heavy “get in, get out” vibe.

Facing EXALT is mostly different in that you push them back to win, which is a much more challenging and involving experience. Killing an EXALT agent isn’t a case of abusing a sniper’s double-tap ability, or blowing them up with a well-placed grenade. Instead it is a much slower conflict based around out-positioning them, which is something they are very good at themselves. Conflicts are much more drawn out, making each move that extra bit more crucial.

None of us managed to beat EXALT, even though two of us had finished the base game on normal and classic. From our brief time with Enemy Within it is obvious that Firaxis aren’t just adding in more enemies, mutation, and mech suits and calling it a day. The addition of EXALT adds a new spectrum of problems that will require your attention, and one that will need to be beaten a completely different way. While not a revolution of the game, it feels like a natural edition that fits well on the original’s framework to provide a more beefed out experience.