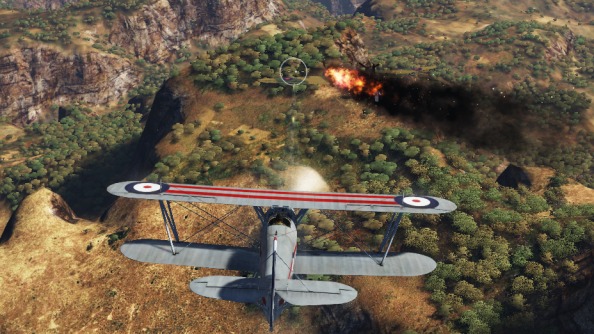 Games like Ace Combat and Tom Clancy’s Hawks are renowned for their air to air combat. But sometimes a game comes along that takes the norm and adds something new and interesting into the mix. So what happens when you take air combat, tank warfare, naval battles and mix them all together? You get the game War Thunder by Gaijin Entertainment. We were able to get hands on with the game at Eurogamer 2013 alongside the producer, Pavel Kulikov. How does the game play out? Let’s prepare for war and find out.

The first part of the game that grabbed my attention was the detail on each plane and tank. These things looked amazing and even had areas of rust and damage from battles. Only the planes were playable in the demo shown at the expo but Pavel did let some news out about when the other vehicles will be available. Planes will be playable from launch, ranging from over two hundred different models between the years of 1927 to 1948. Tanks will be available from the launch of the PS4 version with at least another two hundred different models from the same stretch of time. As for the ships and naval battles, the plan is to have them ready for next year.

The maps are huge with plenty of space for dogfights and bombing raids. The planes control very differently in comparison to most air combat titles as you feel the whole weight of the aircraft. Every turn and accurate manoeuvre feels tough to pull off as if you are behind the cockpit. The game allows you to become the pilot or gunner of the planes, giving you the choice of air to ground or air to air combat. Currently, as the game is in beta on the PC, players can go against each other in sixteen versus sixteen matches at the biggest. By the time of the PS4 release however, there are hopes for the game to grow in size to potentially thirty two versus thirty two.

The game has over sixty locations for players to play in. These locations mix up what you can and can’t play as in battle, giving you the chance to play as every single vehicle type and try out as many different planes, tanks and ships that you want. The locations are a mix of real life locations and fictional locations. Pavel shared the possibility of recreating epic historical battles such as the world wars and the gulf war. He also hinted towards possibly being able to recreate the events of Pearl Harbour, which immediately made me think of performing a kamikaze into enemy ships. The potential of what you can do in this game is huge and truly inspiring.

I asked Pavel whilst playing the game ‘What was a big inspiration when it came to creating War Thunder?’ He replied saying that history played a vital role in the games creation. The developers, as well as himself, are huge history enthusiasts and truly wanted to bring World War I & II alive in a video game experience. This shows in the game as you can see with the environments from historical periods in time, the vehicles from their appropriate countries and the scenarios you can recreate. It is always great to see a team that embrace what they love and bring it to life on the screen.

Another question I asked War Thunder’s producer, was the possibility of an Xbox One release somewhere down the line. Since the game was coming to the PS4 on launch, surely there would be a chance for the competition to get in with the game. Pavel responded with one simple reason as to why a partnership with Microsoft may not be possible with War Thunder, cross platform play. The company has a deal with Sony that allows them to have the game connect between the PC and PS4, allowing gamers to play with each other regardless of platform. This is an exclusive deal with Sony, so the only way the Xbox One could get involved with the game is if they also agree to cross platform play. The chances of this happening are very slim due to Microsoft having to partner with their rivals. It doesn’t mean the game cannot come to the Xbox One, it just means that it is very unlikely.

The last points I brought to Pavel were about the games free to play model. Obviously gamers nowadays are concerned that FTP will turn into pay to win, so I asked him about his stance on the matter and where the game is heading. The producer replied with complete confidence in his product, stating that the only things accessible for players to buy are aesthetic touches and some of the vehicles upon release. The vehicles will not add power to the player but instead add a variation to the players play style. After hearing about this positive news, I then asked him about what aesthetic touches we could get for our vehicles? Pavel replied stating that there will be a variety of thing available over time. These include different decals, colour variations and even custom made decals. I pointed out whether we could go as crazy to having a pink tank or a rainbow coloured plane, but sadly we won’t be seeing anything like that until later in the games life cycle.

Overall, War thunder is an amazing experience that brings the past to life once again. The planes in the game feel very hardy and true to realism whilst the environments help immerse players into the era of combat. The free to play model is looking really solid with the promise of more content coming with the PS4 launch and the coming of 2014. If you haven’t signed up for the beta already, do so now and be sure to immerse yourself in this truly awe inspiring experience.

So what do you think of War Thunder? Are you ready to relive the wars of the past? Let us know what you think in the comments below.