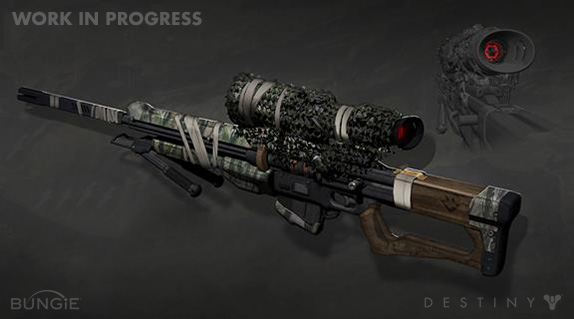 Bungie has released a ton of new info showing the process that went into creating the weapons in Destiny, the persistent-world online shooter coming to nextgen consoles. It seems as though the developers wanted the design of each weapon to tell a story and be its own character, as detailed in these weapon profiles. Each are given a name and backstory, which offers insight into the world of Destiny.

Bungie’s Art Lead, Tom Doyle, also offers comments on each of them.

It was owned by a group of survivalists operating on the new frontier,” says Doyle. Closing Time is a personalized sniper rifle, whose previous owner took good care of it, until they were killed at some point. Bungie wants the design of these weapons to evoke such stories and questions, and tell us that “someone loved it before they too were lost to the dust of our shattered civilisation.” 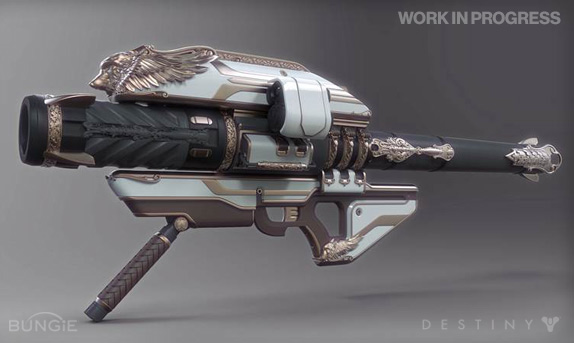 “This is the gilded weapon of a City Champion. It’s a very decorated Guardian weapon to say the least.”  Gjallahorn is a rocket launcher which features an ornate, almost royal look. The wolf ornament lends itself a certain amount of gravitas too.  Apparently this weapon stared out as a joke but evolved into what you see above thanks to the addition of the wolf-head. Doyle says, “I thought this concept said a lot about the world we are making, mainly the mythic elements of its fiction.” 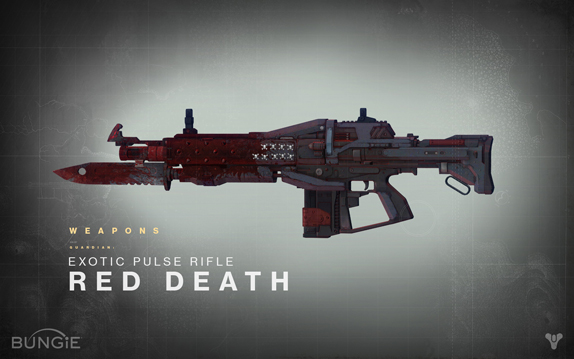 “This is our Heavy Metal gun.” – Tom Doyle

This is a pulse rifle which players will have to look for quite thoroughly in-game. It seems having a Red Death in Destiny should strike awe into your fellow players, as Doyle comments, “Something that was really important early on was when you saw someone in the game and they had one of these things, it really was a metric of how far they’d played in the game but also the type of activities they like to engage in.”

Described as a “bandit weapon”, the Red Death will hopefully provide players with the firepower they need to survive in the game, as well as bit of respect. 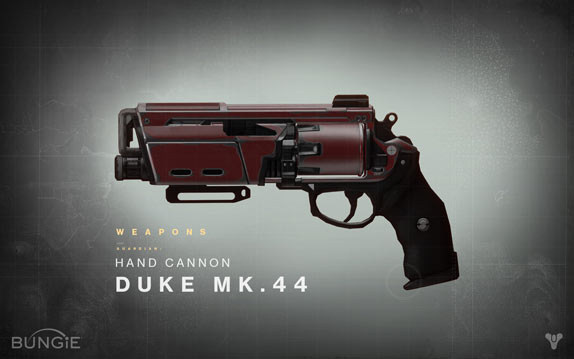 Most likely to be equipped as a sidearm, this handcannon is not an exotic weapon like those above, but it’ll sure pack a punch. Designed for scrappy situations where it’s “kill or be killed”, this revolver is available to all players. “It’s a solid piece,” states Doyle. “This weapon is most commonly associated with newer Guardians who equip a sidearm in their primary loadout.”

The Thunderlord is a beast of a weapon, which carries with it some exclusivity. Make no mistake, when you finally get this weapon, it’ll be worth it. Doyle once again offers insight into the story behind the weapon. “The Thunderlord is a desperate measure on the part of a society that grew weary of being outgunned. The ammunition is some kind of monster that they wouldn’t normally use,” Doyle warns. “The use of electro-static rounds over this amplitude has been prohibited due to their volatility.”

While it will probably pack an intense recoil, the heavy machine gun will most likely be a blast to play with once games get their hands on it.

Bungie is clearly putting a lot of effort into its world-building and narrative for its upcoming shooter, Destiny. It makes a change from using the same stock sniper rifle or handgun with no personality, and should provide a decent element of the fiction within Destiny.

What do you think? Do the stories behind these weapons provide you an effective narrative? Let us know what you think in the comments below.