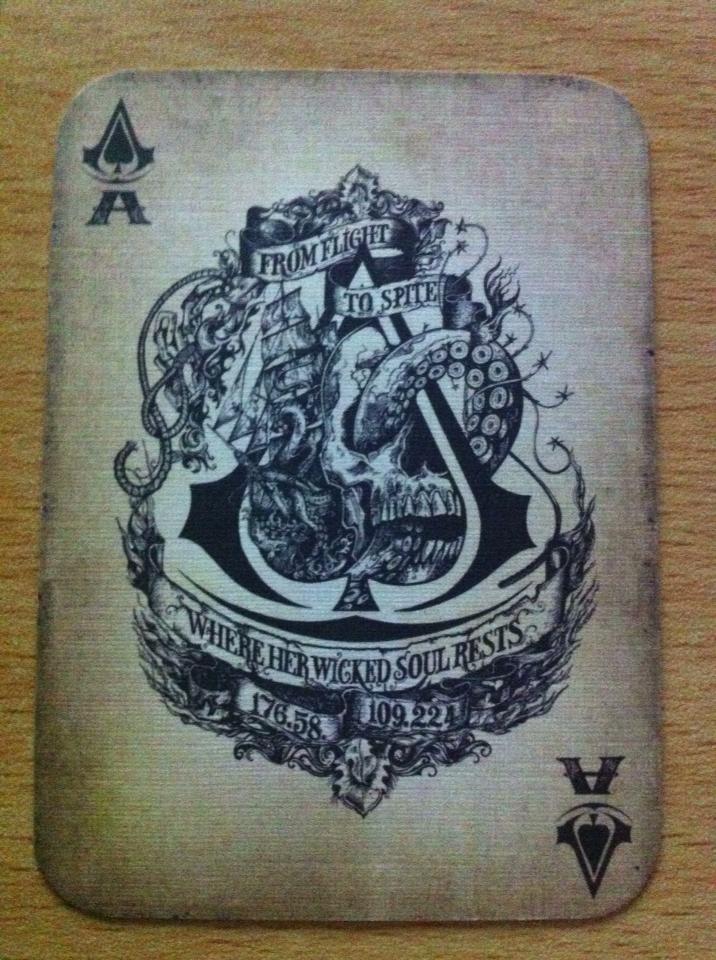 Update: The site is now live with a new mystery “From Fight to Spite, Where her wick soul rests”. Once you get into the site after finding the answer you are brought to a new pretty cool UI (Pictures at the bottom)

We know it all about Assassin’s Creed IV: Black Flag, or at least we assume so by this point. Coming out at the end of next month, trailers upon trailers have been released, showing us every facet of Ubisoft’s largest series. Pirates and plunder are expected later this year, but what are they teasing now?

Through the post today we received this singluar card in an envelope:

Nothing else was in the envelope, just this solitary ace of spades. Admittedly it is a really lovely looking card, and a deck of high quality cards like this would be great. The eagle-eyed amongst you may notice it has some interesting numbers at the bottom. Anyone familiar with the workings of the internet will recognise this as an IP address, one that takes you to a site called ac4aceofspaces.com

At this moment the site doesn’t actually have anything on it other than an image of an hourglass and the ominous text:

“Assassin, You Are Too Early
The Truth Will Be Revealed Later Today”

What is this truth and what do Ubisoft have left to reveal are both valid questions at this point. Thankfully though there isn’t a long wait, so all shall be revealed by the days end. Until then, check back here when we report on the latest Assassin’s Creed IV: Black Flag news as it arrives.

Assassin’s Creed IV: Black Flag is out on PS3, Xbox 360 and WiiU October 29 in NA and November 1 in EU, with the PS4 and Xbox One edition coming out shortly after as the consoles are released.

Update: Here is what it looks like once your into the program. You are able to set up your own ship and find a crew but you will need 5 crew to start – if you don’t want to do this you can just be a crew member and apply for another ship.

What do you think of their marketing? Taking part in the experience? Let us know in the comments.