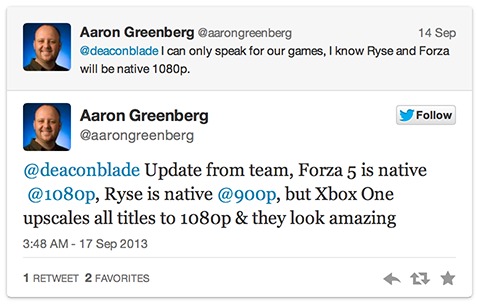 Aaron Greenberg, Chief of Staff for Devices and Studios Group at Microsoft, recently tweeted the confirmation that Ryse: Son of Rome runs at a native resolution of “900p”, as opposed to the “full HD” offered by 1080p resolutions. In terms of image size, then, we’re looking at a pixel resolution of 1600×900 for the Xbox One exclusive.

What’s interesting is that this confirmation comes as an update, correcting claims that the game was running at a native 1080p resolution. Greenberg took to twitter to confirm:

Some gamers on sites like NeoGaf have pointed out that a resolution of 1600×900 features less pixels – 44% in fact – than a 1920×1080 resolution. However, Greenberg also clarified that another big Xbox One launch title, Forza Motorsport 5, is running natively at 1080p, so any fears about the Xbox One’s graphical clout can be put to rest.

Also of note is Greenberg’s assertion that the Xbox One upscales all titles to 1080p, so gamers probably shouldn’t worry so much.

Is it case of PR misleading the consumer? Or is it not that big of an issue? In all probability, when gamers get their hands on Ryse this November, they’ll be more focused on the gameplay than feeling cheated out of a few pixels.

Be sure to join in the discussion and let us know what you think in the comments below.