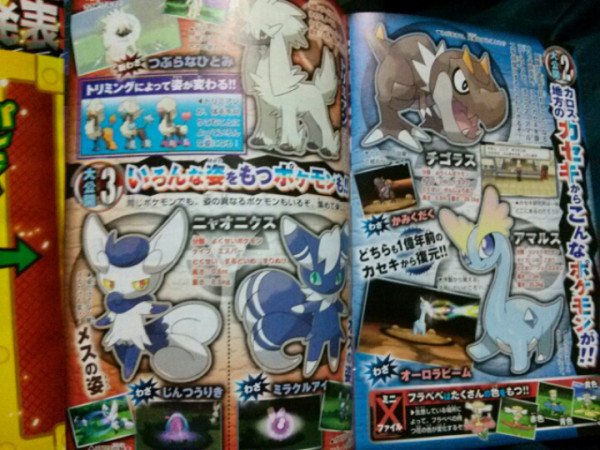 Lets not waste any time and jump into what new information we have about Pokémon X and Y!

As you can see in this scan we are shown four new Pokémon. The first (on the bottom right) is a new Diplodocus fossil Pokémon called Amarusu which is Rock/Ice type with the new ability “Freeze Skin” turns normal type moves that hit it into ice-type moves, it can also learn Aurora Beam. The next (on the top right) is the other T-rex fossil Pokémon called Chigorasu which is Rock/Dragon type and has a new ability called “Hard Jaw” which increases the power of Biting moves. Lastly, remember the llama Pokémon? Well, it is not a llama at all! It’s the white dog Pokémon called Torimian (on the top left) which is Normal-type and has a new ability called “Fur Coat” which reduces physical damage and according to the scans, with “trimming” you can change the Pokémons appearance using salons in the Kalos region, it can also learn a new Fairy-type move called “Round Eyes”. Lastly, we have Psychic-type cat called Nyaonikusu (on the bottom left) which has a different appearence and movesets based on its gender, Male (on the left) being more defensive and Female (on the right) being more offensive. Its ability can either be Keen Eye or Infiltrator.

Now we have the introduction of Mega Garchomp. This Mega Pokémon is still a Ground/Dragon-type but has the ability “Sand Force” in this form. It also looks pretty amazing!

The scans also revealed the evolutions of the starter Pokémon:

Its is also worth noting that they all stay as one type (Grass, Water and Fire respectively) in their second stage evolutions and that Teerunaa is seen standing on its back legs.

More info on the PokeBank and the newly revealed Pokémon. 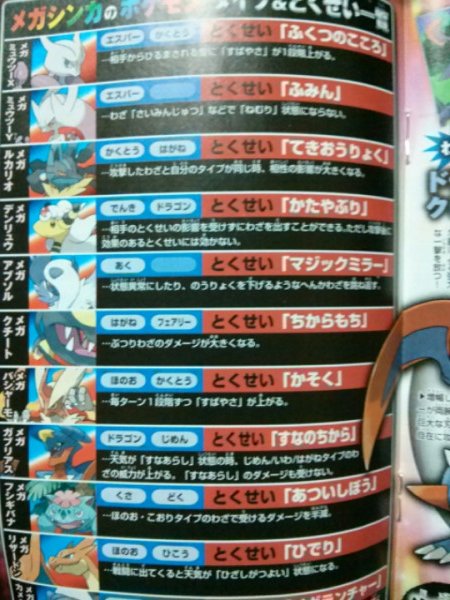 A type chart of the recently announced Mega Pokémon. 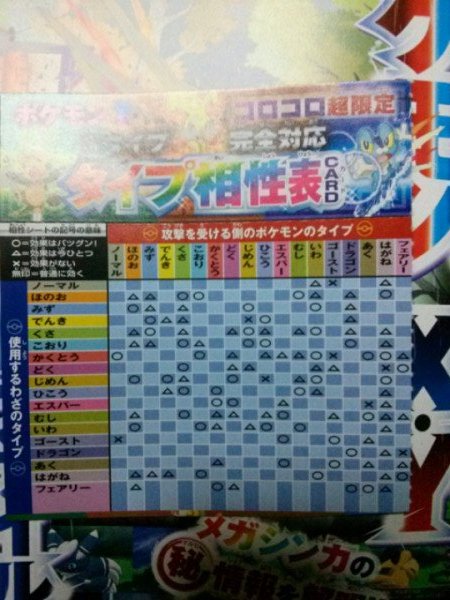 Also, it has been revealed that Steel-type will be losing its resistance to Ghost and Dark-type as well.

So that’s all the news so far. We will be updating this with more pictures and/or news if any more appear so stay tuned!

What do you think of this new batch of Pokémon X and Y news? Like any of the new Pokémon? What about the new Mega Pokémon?