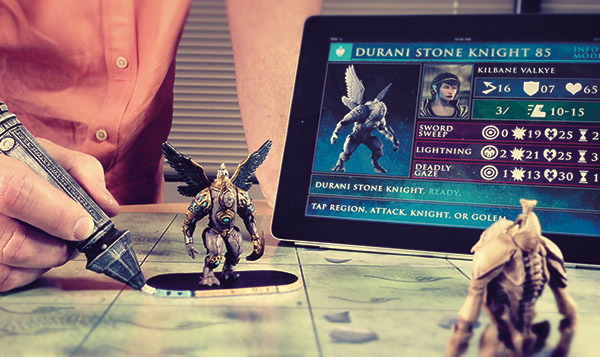 Ever wanted to get into Warhammer 40K, but found things like money and painting got in the way? Ever wished complex boardgames came with a small man who refereed games so you didn’t have to read 100 page books before playing? Harebrained Schemes have, and want their latest project Golem Arcana to fill that void. Asking for $500,000, the Shadowrun Return developers are thinking outside the purely virtual realm.

Marketing itself as a “digitally enhanced miniatures game”, Golem Arcana integrates touchscreen devices into the world of painted figures. Using a unique device, akin to a graphics tablet pen, known as the Tabletop Digital Interface Stylus (TDI), players use it as a conduit between tablets or smartphones and the physical pieces. Played physically with pre-packaged figures on a board, smart devices communicate with the TDI to act as rule book, referee and as a digital readout of the game, keeping track of piece position and status.

It sounds like a rather cool idea, one which will hopefully catch on. Aiming at an average of 45 mins per skirmish, it should trim the fat around many of the games. With all of the physical pieces however, the projects rewards are a touch more expensive. With higher amounts nabbing you more parts and extras, the first pledge amount to earn you physical parts is $55, with added money for postage and packing. Keep in mind however that by pledging you are getting more than a simple digital download, but something you can hold on to and display.

With 34 days left and $71,791/$500,000 at the time of writing already pledged, it should be worth the money for anyone who is looking for a new way of playing a figurine based board game. You can check out the kickstarter here.

What do you think? Are you interested in this novel new idea? Do you think it is worth the price? Let us know in the comments.