I have a confession to make here. I really am not a huge fan of the FPS genre. I am one of those gamers who believe the genre is starting to take over the gaming world and not for the better. So you can imagine my scepticism when everyone in VGU started to tell me how good Titainfall was. So, with very low expectations, I decided to try the Titanfall Multiplayer demo out. Oh boy was I surprised.

Titanfall is one of the most fun FPS games I have played in recent years. From the moment you take control of your character you are free as a bird, almost literally. Titanfall has a huge emphasis on letting the players free run around the maps as fast as possible in order to create some unique and highly intense gameplay situations. You have no idea how cool it feels when you spawn, run up a building and start free running across rooftops while in a fire fight with the opposing team, it really is quite exhilarating.

This feeling is improved by the game balancing a smooth set of animations for wall running and jumping combined with the realistic aesthetics of the futuristic world that Respawn Entertainment have created. This also extends to the levels designs, the map we played was designed really well allowing players to pick any gameplay style and not feel like it was the wrong one. You feel like playing Titanfall like a Call of Duty game? Go ahead! Feel like running over buildings to flank the enemy? Sure! This design also allows you to shake up your gameplay style at any time which is something a lot of FPS games struggle to do. 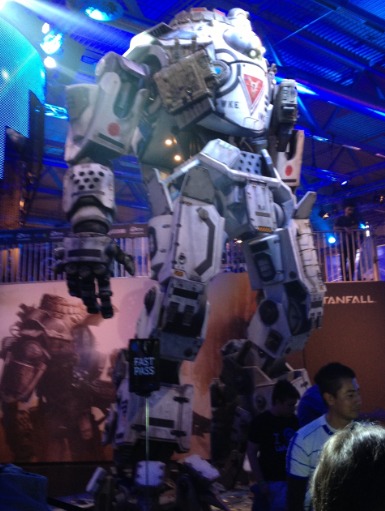 Ok, who among you would NOT want one of these?

Being a normal solider (or a grunt as it’s called in Titanfall) is a lot of fun but do you know what is just as fun (if not more)? Giant mechs. After a certain amount of time has passed, you can call down your Titan to wreak some havoc on the battlefield. Each Titan has its own set of abilities which give them differing advantages such as an energy shield which absorbs bullets. The Titans are truly incredible to behold and, more importantly, pilot in a multiplayer setting. It’s just so epic piloting your personal giant mech around the map and adds a really intense atmosphere to the combat on top of its fast pace.

So the combat is awesome, the pace is good and the maps are well designed, surely then something must be up with the weapons. There is yes, it’s called a Smart Pistol. This gun is a legal aimbot and it is hella fun to use. By aiming at players, while NOT looking down the scope, you lock on to their heads. Then the next time you shoot you instantly headshot the players you locked onto as long as you are still in range. This sounds overpowered but it is a lot harder to use then you would initially think. It also is naturally weak to balance this ability. The other weapons are you standard assault rifles/shotguns/pistols with a more futuristic feel and while being cool to use, were nowhere near as fun to use as the Smart Pistol.

Titanfall was one of the best experiences you could try at this year’s Gamescom and is set to be one of the best FPS’s next year. It is definitely worth your time and money if you can pick this game up for Xbox One, Xbox 360 or PC.