The blue blur has had a rocky ride over the years. However, his more recent titles have steadily improved cumulating in Sonic Generations in 2012, a game which had an emphasis on speed and nostalgia. So you can imagine the fan’s thoughts when they saw the more platform based gameplay of Sonic Lost World.

The most important thing you need to know it that the control scheme is actually quite clever. Sonic has three speeds, a light jog which allows you to be very precise with his jumps and platforming, his standard “figure of 8” run (done by holding down right trigger) which give less control on platforming but allows Sonic to free run over obstacles and finally the spin dash (done by holding down the left trigger) which makes Sonic go super-fast but in exchanged he loses a lot of his control and cannot free run. This makes Sonic more diverse than ever before and allows players to play the new levels how they want which is really fun.

This is very different from any Sonic game that has come before and this no bad thing. It has been said before but Sonic Lost World is pretty much Mario Galaxy sped up, and this works really well. The level designs in the demo were diverse and, more importantly, interesting to travel through. In the time we had to play the demo we barely scratched the surface of all the goodies and varying paths in the starting level alone.

This applies to both versions of the game as well. In recent years, Sonic titles on the 3DS have not been that up to par, however, we are happy to report that this Sonic 3DS game is just as good as its Wii U counterpart in terms of design and gameplay. In fact, I would go as far to say the control scheme is a tiny bit better on the 3DS version! 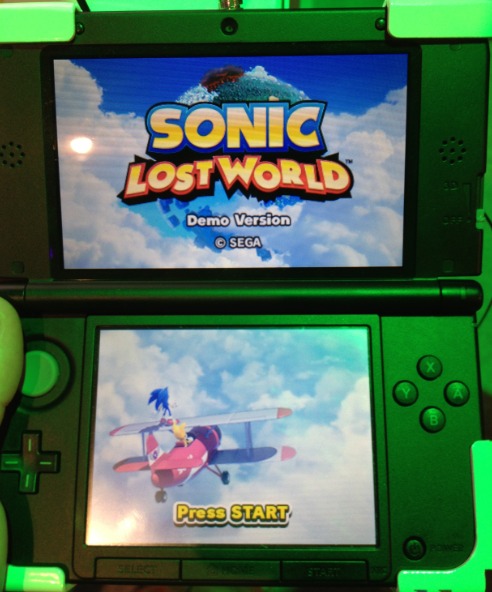 Don’t underestimate the 3DS version of this Sonic game!

Even the wisps, making their glorious return from Sonic Colours, have been implemented well in this new 3D setting. The only real problem in the demo was that some of the wisp powers were rather difficult to activate and control (mostly due to the gamepad being on a wire) which can get frustrating in places when you need to use them to continue but even then the overall flow of the level was not really ruined.

So don’t worry, Sonic Lost World is looking to be a great addition to the series and I am adamant that it will become one of the bigger Sonic games ever and remembered in the years to come. If you have a Wii U we recommend that you check this title out. Sonic fans, (I assume you have already pre-ordered it by now) rest easy, this is not one Sonic game that will flop.