Oh Assassin’s Creed, you have always been a fun, stabby set of games, even more so when your series got a multiplayer. The mode was very fun when it was introduced; it was tense hiding from people trying to kill you while you scouted for your target and actually required a fair bit of skill. Since then, it has become a staple of the series and very much enjoyed by the fans. So, how is this new version of this multiplayer?

Well, it looks pretty. The levels look wonderfully detailed and full of life; the next gen consoles have allowed more subtle animations to be fitted into the gameplay. This makes hiding in groups a lot tenser as you can be seen from even smaller movements you avatar may attempt to do. In general the animations are a lot smoother overall as well, your character does look amazing running across the rooftops and the kills are now a lot more interesting to watch as well.

Don’t forget you can now taunt people during your game! Nothing is funnier than watching a player brutally assassinate someone and then crotch grab taunt over their dead body. This becomes even funnier if this taunting player is your target as you can imagine. 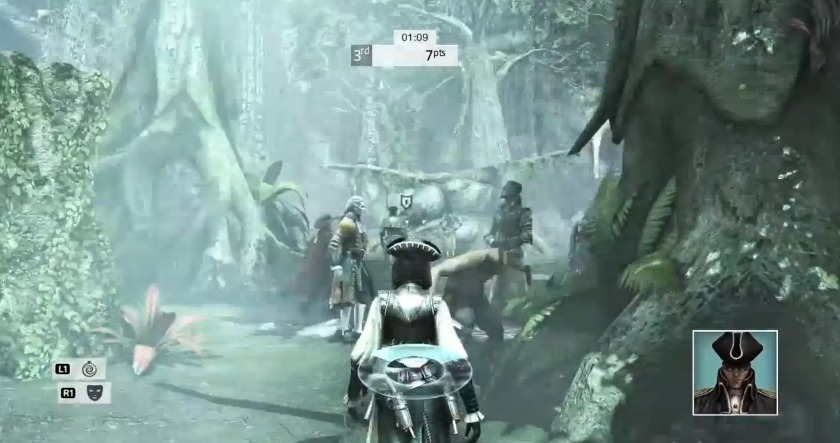 Say what you will about the Assassin’s Creed series, but it always delivers good stuff.

The UI has also seen a small improvement in Assassin’s Creed 4. In AC3 it was a bit too big for my liking and got in the way sometimes during hectic moments. The new one is a lot nicer on the eyes and does a good job of knowing when and when not to be seen. This will make hard-core players of this series a lot happier.

Unfortunately, not much has really changed gameplay wise, which is not necessarily a bad thing. The formula in Assassin’s Creed 3 was fine so why change it? The action is still there and the mode still feels fun and exciting to play so don’t be too surprised if you have played every other title in the series and this version feels the same as before.

Assassins Creed 4’s multiplayer isn’t looking for improvements anymore; it is refining the areas of the multiplayer experience so everything is the best it can be. If it is the aesthetics turn then so be it, now we can enjoy our stab fest and have it look a lot better on the eyes. In short, if you are planning on picking up Assassin’s Creed 4: Black Flag, don’t forget the multiplayer!