As the newest block from Magic the Gathering edges closer and closer, it is time to enter spoiler season for the Theros set. These spoilers have been revealed after announcement of the Duel Pack, Heroes vs Monsters, coming on September 6th. The duel deck will have three cards from the heroes and three from the monsters that will feature in Theros. Here are the details on the current cards spoilt:

Heroic – Whenever you cast a spell that targets Anax and Cymede, creatures you control get +1/+1 and gain trample until end of turn.
Akros’s greatest heroes are also its royalty.

XXG: Monstrosity X. (If this creature isn’t monstrous, put X +1/+1 counters on it and it becomes monstrous.)
When Polukranos, World Eater becomes monstrous, it deals X damage divided as you choose among any number of target creatures your opponents control. Each of those creatures deals damage equal to its power to Polukranos.

Whenever enchanted creature attacks, put a +1/+1 counter on it. Then if it has three or more +1/+1 counters on it, sacrifice Ordeal of Purphoros.

When you sacrifice Ordeal of Purphoros, it deals 3 damage to target creature or player.

Whenever Cavalry Pegasus attacks, each attacking Human gains flying until end of turn.
“It is hope, hooved and winged.”
– Cymede, queen of Akros

Destroy target artifact or enchantment. Destructive Revelry deals 2 damage to that permanent’s controller.
“Stoke a fire hot enough and you’ll never run out of things to burn.”
-Xenagos, the Reveler 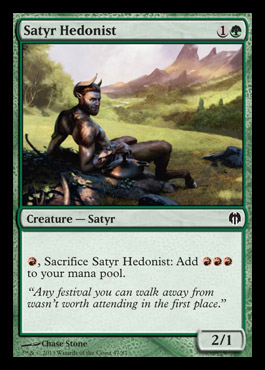 R, Sacrifice Satyr Hedonist: Add RRR to your mana pool.
“Any festival you can walk away from wasn’t worth attending in the first place.”

Aside from the six spoilers revealed in the duel deck, there is also one mysterious spoiler that the majority of the community is currently calling the ‘Black God’.

It is believed that the ‘Black God’ will be one of many god cards in the Theros set. The gods are planning to be Mythic Rare creatures with abilities that will rival against any deck out there. It will be interesting to see what these gods are capable of in the game.