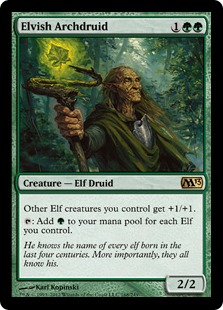 At a Pro Tour event in Houston, Texas, back at the end of July, a player was caught cheating in the event and yet still won the whole qualifier tournament. The winner is now planning on going to the Pro Tour event in Dublin during the Theros block to be in with a chance of winning $250,000.

The player was one of two hundred and eighty four participating in the event for the nine rounds of swiss. His deck was checked in round six of the tournament and his deck was found to have six copies of Elvish Archdruid in his deck. The maximum of any card you can put into a deck is four.

He was deck checked during round six as he was playing with four Elvish Archdruids in play. He then went to reveal the fifth off of Garruk, Caller of Beasts‘ +1 ability. The ability is: Reveal the top five cards of your library. Put all creature cards revealed this way into your hand and the rest in the bottom of the deck in any order.

On the players registration sheet he had wrote that his deck included: four Elvish Archdruids and two Avacyn’s Pilgrim. Upon the infraction he was only given a game loss and was allowed to keep playing with this registered deck. He then went on to win the tournament with this illegal deck. It was also revealed that the winner also had a separate infraction for playing with unmarked Innistrad checklist cards and playing with clear sleeves.

To put into reason why this was controversial, a forum post revealed the mathematics behind the chances of pulling these cards out of the deck in game. The chance to open with a Archdruid in hand with four copies is 40% whilst with six this increases to 54%. This means that the you would have a very good and solid 50% chance on opening up and drawing into early these core components of the deck.

There has been no comment concerning the winner’s penalty and whether he will be punished further for this event. Many players are in uproar that the judges have given this player a slap on the wrist and believe he should be kicked out of the standings for the Dublin Pro Tour.

Cheating at a professional tournament is very bad for both you and the image of the game. This player, at least in my opinion, should have been punished further and disqualified from the tournament so that a worthy player could have gone to the Pro Tour in his place.

What do you guys think of this situation? Do you think the winner deserves to go to the Theros Block Pro Tour? Let us know what you think in the comments below.