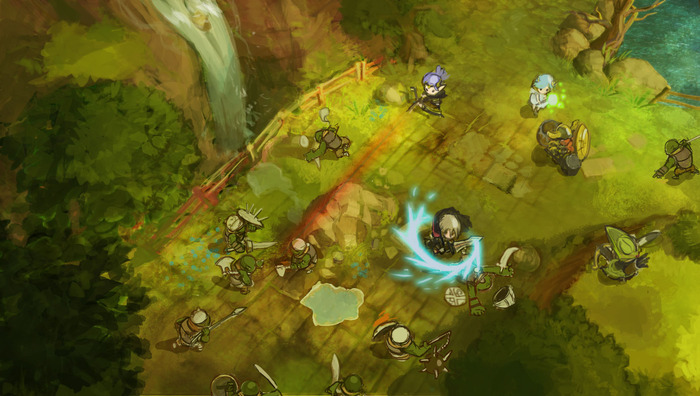 Project Phoenix is a Kickstarter unlike any you ever will have seen. It features talented individuals form all corners of the game industry (with credits including several Final Fantasies, The Elder Scrolls: Skyrim, Valkyria Chronicles, L.A. Noire, Diablo III, Halo 4, Crysis 3, the list goes on) coming together to create a JRPG with a squad based RTS game design and good lord is it looking to be pretty awesome. It’s no wonder then that this project was fully funded in just under 9 hours and is still going strong!

That is an incredible line up of talented people!

As the Kickstarter project is quick to point out, this is:

The game is set to be released in 2015 on PC, Mac and Linux, with a different version for Android and iOS. As well as this, if things go well with Sony, they may aslo release Project Phoenix on PS4 and PS Vita!

The Story so far:

“An angel named Rafel has come to the world of Azuregard with no idea of how she got there, but coming at a time where strife and chaos threaten to tear the world apart.”

“The orcish clans, mankind’s ancient enemy, have begun migrating from the mountains and their raids upon human settlements become more brazen and audacious by the day. If this wasn’t enough, the denizens of the southern coastal regions hear rumor of the free men who, once vanquished, have emerged, artifact in hand. They are grim, determined, and more organized than ever before, with their energies set towards toppling the Empire.”

“Amidst the stirrings of war, the elves watch a fateful star and recognize it as a portent that will decide the fate of all those who live on Azuregard. It is within these tumultuous times that the angel Rafel finds herself in a struggle to find her place in the world and perhaps… even save it from itself.”

We at VGU suggest you go and check out this Kickstarter as it looks like this project is going to turn out nothing short of amazing.

But what do you think of Project Phoenix? Do you like the sound of it? Will you pledge anything?