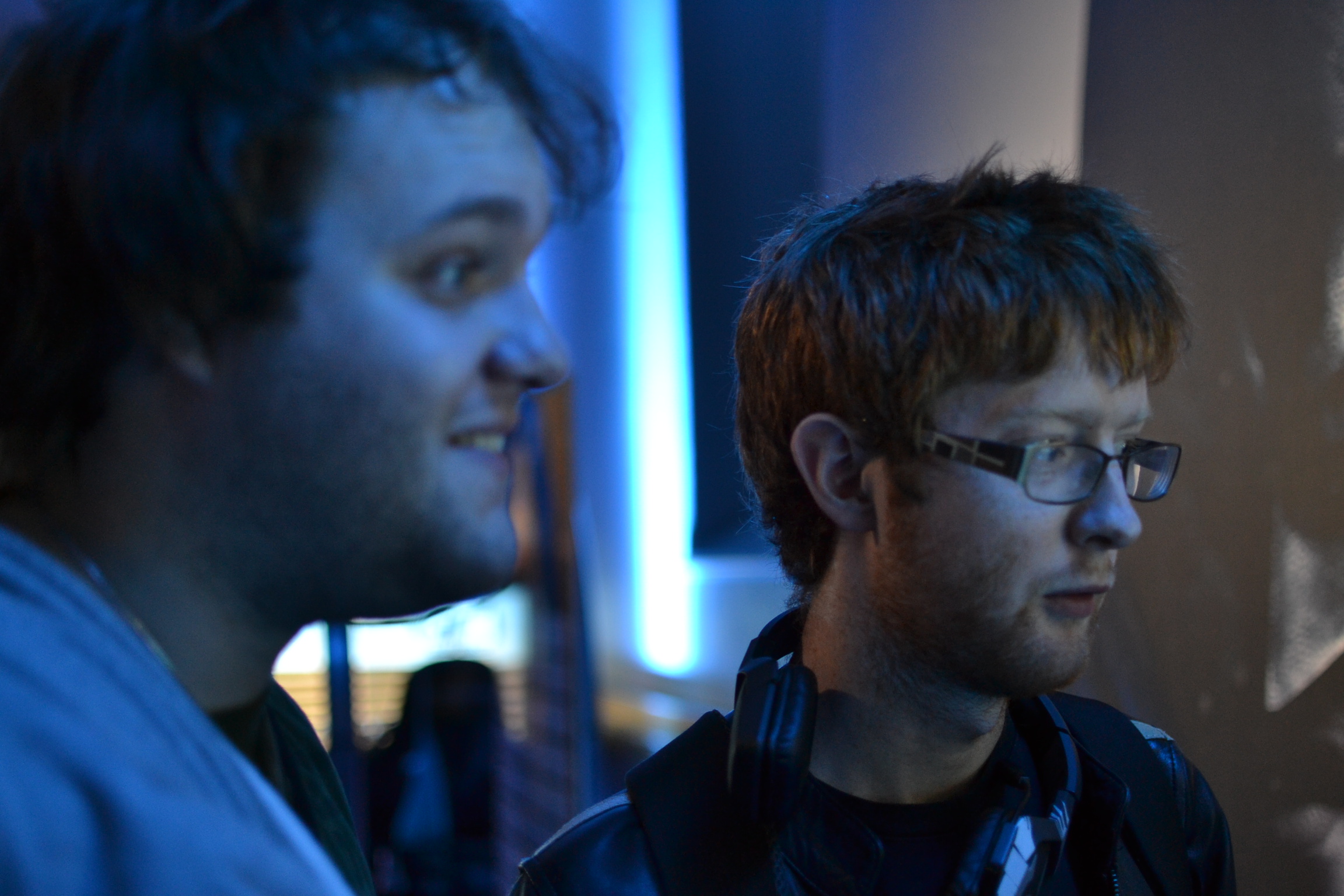 Cool Story: A few of us from VGU were lucky enough to be invited down to Sony’s PlayStation Summer Showcase in London this Thursday just gone. Cooler story: We got to have a look at a load of upcoming Sony titles across their entire range of consoles and handhelds. Not good enough? OK even cooler story still, we had a hands-on session with a little upcoming title you may have heard of… Batman: Arkham Origins?

That’s me on the right pulling a stupid ‘concentrating on gaming’ face whilst Bradley looks on with terrifying glee. I think he’s working for The Joker…

So, this was pretty much the demo that was available for people to play at this year’s E3, but as not everyone is lucky enough to get to head out to LA we very much appreciated Sony & Warner Bros. giving us the chance to try it out here in the UK. For the demo we basically had to disarm a few bombs that The Joker had left lying around the city (honestly, he never cleans up after himself).

The demo was well structured to give the player a good overview of all the elements of the game. We started out using a proximity sensor to find the first bomb, which we then promptly disarmed using The Dark Knight’s trusty Cryptographic Sequencer. So we show off our 1337 hacking skills and foil The Joker’s truck bomb plot only to find that the Clown Prince of Crime has another bomb somewhere else in the city.

Apologies for the blurry image, the Cryptographic Sequencer was interfering with our camera.

The race to the next bomb site shows off just how massive Gotham is in Arkham Origins, vertically rather than by area though. There were some big buildings in Arkham City, but the skyscrapers and office blocks that you fly between are enormous this time around. Speaking of big ol’ buildings, the next bomb is up on the roof of one, so it’s time to get our grapple gun out.

Upon his arrival on the roof, The Caped Crusader is greeted by a few of Joker’s thugs which allows us to finally try out the combat system. Don’t worry guys, they haven’t messed with our baby. Batman still lays the smack down in style with his patented ‘press square to kick ass, press triangle to counter kick ass’ combat system. It’s as satisfying as ever to play as the rich kid in a fancy suit beating up less privileged members of society.

Funny story whilst we’re talking about the combat: when you’re used to playing with an Xbox controller and the game tells you to press the green button to counter, you do not counter. What you do is jump around like an idiot before being smacked upside the head because you pressed the wrong button. Damn controller layouts being different, I can’t imagine how multiplatform-owning gamers get by. Anyway, back to Batman.

After disarming the second bomb via the trusty method of punching it, what looks like a news chopper turns up and shines a spotlight on you, before promptly spinning out of control and crashing. Has a helicopter ever survived a video game? The World’s Greatest Detective suspects foul play rather than pilot error though and this sets up for an introduction into the games revamped crime scene mechanic.

That number on the side looks important, if only it weren’t blurred out…

By analysing key elements from the crime scene, Bats can piece together the evidence and then rewind the entire crime to find the next clue. So, with our helicopter having met a pretty inevitable fate, Batman descends to the street to look at the crash site. There he sees that the chopper is missing its tail so he rewinds back to when the pilot lost it and crashed. He then replays the scene from there, this time following the tail’s trajectory to find out where it landed after the crash. Batman examines the tail piece and determines that it was shot by a sniper, causing the helicopter to lose control.

So back in time we go once again to the crash, only this time looking for the sniper’s bullet trail. Once we find that we figure out the shot ricocheted off a wall, which only one sniper in the world could have done, our old buddy Deadshot. At this point I was informed by a staff member that this discovery leads on to a side quest where Batman hunts down Deadshot but for now our Winged Crusader has better things to do, like go bust up the Joker’s party at a nearby hotel.

Inside the hotel we are greeted with a familiar scene: a load of goons patrolling some walkways with gargoyles above them (seriously, the criminals of Gotham should just get together and destroy these things one night, Batman would be screwed). So once we position ourselves on top of one of said conspicuous gargoyles we are given the opportunity to try out a new gadget in Batman’s arsenal, the Remote Grappler.

Not technically our picture but shush, we didn’t have images of the remote batclaw and it’s really cool.

Think the grapple gun from Just Cause 2 and you’re pretty much there. You aim at one target, then another target or environmental object and unleash the hilarity as you remotely string guards up to gargoyles, propel explosives at unsuspecting goons or even just bring two goons together for a less than romantic embrace. Once the goons were dealt with we jumped into an elevator were upon we are treated to a lovely cutscene.

Batman is chilling on top of the lift, being all ninja and what not when our old buddy Bane punches through the roof and grabs Bats by the face and drags him off to see the Joker. Joker yappers on for a bit (it was loud in the room so we’ll just assume he was laying the evil smack talk on heavy) and when he’s done talking he gets bored and blows up a building. Interestingly, Batman loses it at this point and starts beating the living hell out of the Joker, screaming at him “how many lives did you just take?” and smashing his face into the table. It’s great to see what the developers are doing with this younger take on Batman, showing him as a less composed, more arrogant and emotionally unstable hero than the cool, collected Dark Knight we are presented with in the first two games.

Say what you like about The Joker, he does have great teeth.

Anyway that’s it folks, that’s all she wrote. Arkham Origins is definitely going to be a must-buy this October with stunning environments, improved gameplay and a smorgasbord of famous faces from the Batman universe making an appearance. Stand by for more updates on our little mini-adventure at Sony’s PlayStation Summer Showcase including some video content of everything we saw, Batman included.

Edit: Here is the video of me playing the sweetness that is Batman Arkham Origins…

What do you think of our little run in with The Caped Crusader? Does Origins look like it’s going to be a worthy successor to Arkham City, or did it live long enough to see itself become the villain? Let us know in the comments below.

PlayStation Plus Free Games For January 2019
Powered by Magic