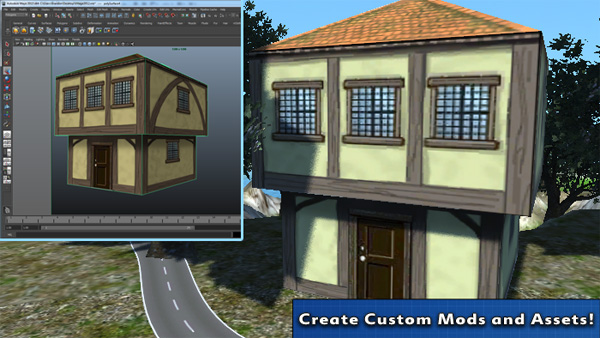 Without mixing terms Simcity was a huge cock-up. EA walked away pocketing gamers cash while pushing out an over DLC’ed game which put too many restrictions on the buyer.

During the same time an unknown studio produced a Kickstarter project known as “Civitas”. Made by a small team of game devs known as  G.A.M. and based in Austin Texas, they promised everything Simcity failed to deliver.

Including teraforming, zoning and allowing to create all your buildings from scratch, many gamers lapped it up. I mean who wouldn’t after buying Simcity and reading all the bad press. It seemed like a dream come true. Even I was a little excited, I loved Sim City 4 and wanted a new game to let me make my metropolis.

The initial screenshots even made it seem like the game was surprisingly far along, with the words “beta” thrown everywhere.

With both offline and online play, as well as a load of new feature that weren’t even in the good Simcity games, Civitas made the slow crawl to their $250,000 goal. Then only about halfway into the project it was cancelled stating they had found “private funding”. At this point some people smelled something fishy, but couldn’t prove that anything was wrong. It should be noted that they did give full refunds and apologised to backers.

While a bit secretive, things still looked rosey. They were building an alright, but not great, relationship with the community and things looked fine. A forum was rolled out and Beta promises soon followed. The forums initially were abuzz with hopes and dreams for a perfect city building game.

That was the last thing heard out of the team.

The official site homepage hasn’t been updated since late March.

Their last tweet was 19th April talking about the forums being down for a few hours.

The forum became dead not long after, only populated by those asking what has happened to the game.

The largest development since hasn’t even come from the developers, but rather one of the forum admins “JuliaZ” states she is resigning as the forum admin/mod because the game is going nowhere.

In her posts she notes that Brandon Smith, the man who led the Kickstarter campaign and main liaison with the community, hasn’t responding to her questions and hasn’t logged on for over 62 days.

Even worse she states “we’ve been sitting on an update about their acceptance by a major games-platform manufacturer for TWO AND A HALF MONTHS“. This sounds like some fairly important, interesting news to not release.

Games do take a long time to make, we at VGU understand this as we have made a number of them ourselves during our time. Three months is a tough time during the beginning of development. The team working on Civitas however promised beta information that hasn’t arrived along with other details. For three months they have been silent, not answering any questions.

So what could this mean?

It could mean they are waiting to make a huge announcement. That seems odd however given that they are not talking to anyone, not even team members according to the forum post, about anything anf even going so far as to avoid them.

They could have hit a block. Perhaps a funding issue with their private backers. It is very possible given the nature of the industry. It could already be the end for Civitas, which would be sad.

The worst, but by no means the most likely, is that they have nothing. They have spent months twiddling their thumbs or developing at a crawl. Nothing to show in three months, not even a screenshot, is a little worrying.

At the very least the project management seems extremely poor. Given that the game came out riding on a wave of the Simcity backlash that seems almost suicidal.

One of any number of things could have happened, some good and some bad. But with the teams staunch silence things don’t seem to be good. Hell, maybe their secret backer is EA wanting to silence them (for as much sense as that makes).

Perhaps we will hear more in the near future, perhaps in responce to JuliaZ’s post. Until then don’t wait for Civitas, right now it seems like that train is arriving any time soon.