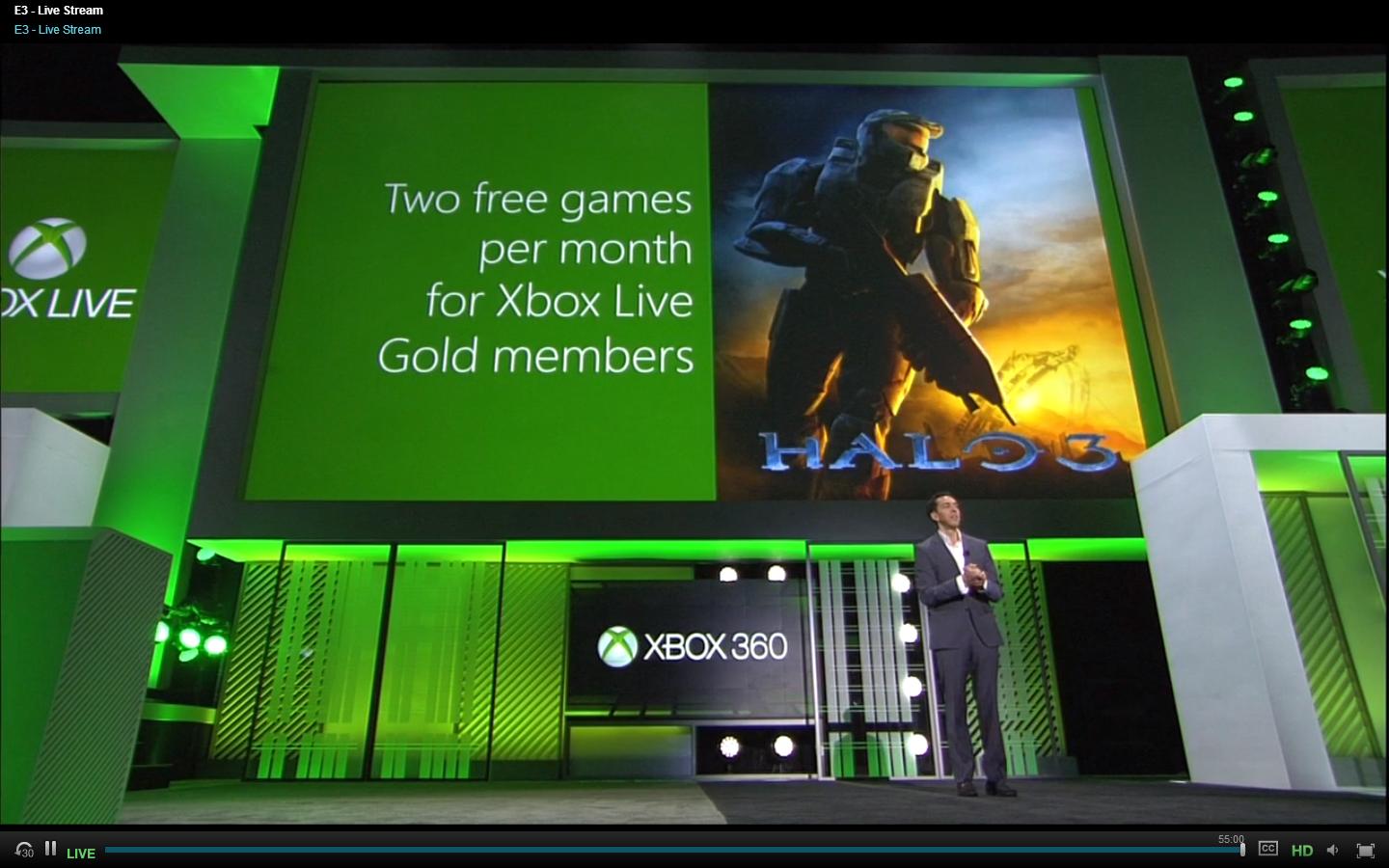 Well the dust is still settling over the Los Angeles Convention Center after E3’s battle of the conferences, as Microsoft sought to lay to rest gamer’s fears about the Xbox One whilst Sony looked to drive home their advantage. We’ll come to comparing the two conferences later, but for now let’s have a look at how Microsoft’s conference stands up on its own.

Microsoft messed up big time with their Xbox One reveal not long past, trying to push it as a multimedia centre first and a games console second. People came away from the console reveal thinking about TV, sports and DRM. Since then Microsoft have been on damage control, attempting to lay to rest a few of the rumours about DRM, always-online and, of course, the games themselves. The Xbox 360 is a games console, the follow-up to it should be a games console. Don’t get me wrong, I use my Xbox 360 for Netflix, YouTube, etc. but that isn’t why I own it; I own a games console to play games.

Fast forward to the big night, the opening of E3 was upon us and Microsoft stepped up to deliver their key notes speech. Did they get the job done? Did they address what needed to be addressed? Well let’s start with the good first and there was a lot of good.

Microsoft showed off a new version of the Xbox 360 which fits more with the look of the Xbox One. I think what they’re trying to do here is sell the Xbox 360 as the option for those who can’t make use of the Xbox One’s online heavy features. It’s a decent idea and it’s nice to know they’ll be continuing to support the Xbox 360 because it really is a great console. Microsoft also revealed that they were ripping off PlayStation Plus (they obviously didn’t word it like that, but that’s what they’re doing): Xbox Live gold members will receive two free games a month to download, starting with Halo 3 and Assassins Creed 2.

We also saw a few new games for the Xbox 360, including an Xbox version of World of Tanks and Max: The Curse of Brotherhood. Cool beans, they showed they were continuing support whilst not dwelling on the old for two long. This was great. Then it was time for the Xbox One stuff.

Microsoft brought games…lots of games. I was expecting their spokesperson to walk out covered in gold and medallions because they have been spending a lot of money securing games for the Xbox One.
Getting the obvious out of the way first, Microsoft and 343 Industries showed off a teaser trailer for a new Halo game and although the screen only said Halo on it, we can be fairly sure it will just be called Halo 5. Microsoft don’t win any points for this really, Xbox One comes with Halo. We all knew that and a short teaser trailer doesn’t give us any new information. That said, Halo is a massive franchise and it’s sure to bring them a lot of sales.

Continuing the theme of stuff we knew was coming, we got a much better look at Forza 5, which will be coming as a launch title for Xbox One. Pretty much all racing games look stunning and it should come as no surprise that Forza 5 will look sharper than Neil Patrick Harris in his Suitjamas. Gameplay-wise we learned about the cloud powered Drivertar. This learns from your driving style every time you race and will then use what it learns to race against the world when you’re not at the console, earning points for ‘your’ performance. Xbox One doesn’t even need me anymore then, which is kind of cool…I guess.

Moving on we have Dead Rising 3. Taking a sharp left turn from the previous titles, Dead Rising 3 was shown to be a massive, open-world title. The gameplay footage we saw showed the new protagonist shooting up zombie hordes before jumping into a sports car to mow down the undead. Then the car conveniently crashed so he could get out and show off the new Smartglass functionality in Dead Rising 3, which allows you to call in air-strikes in-game using your mobile device.

Then we had Ryse: Son of Rome, the upcoming third-person hack-and-slash video game in development by Crytek. We saw a five minute gameplay demo in which a lot of people got stabbed in the chest. Ryse looks absolutely beautiful, as you’d expect any game running on CryEngine 3 to. On the gameplay front though, Ryse was a little less impressive. The combat seemed very God of War, but instead of getting to play as the titular god of war, Kratos, you’re just some Roman dude. Ryse was by far the most underwhelming title in the show.

Back to the good stuff, and perhaps even the best stuff of all, we have Titanfall. This is without a doubt one of the biggest titles revealed at E3. Titanfall is a sci-fi first-person shooter which incorporates aspects of free-running and mech battles in equal parts. Jump into a Titan and rain death on your enemies or run over rooftops, bouncing off billboards to outmanoeuvre your sizable opponents.Titanfall looks amazing not only graphically, but in terms of the (admittedly limited) gameplay we’ve seen. This really could be the next big thing: the new Halo, the new Gears of War, Microsoft’s ace in the hole.

Let’s see what else did we have? SWERY65, the guys behind Deadly Premonition announced D4, a new episodic murder-mystery game that boasts cell-shaded graphics ala Borderlands. Insomniac announced Sunset Overdrive with a cool trailer showing a lot of funky stuff happening – free-running, zombie-mutant things, a gun that shoots records -it was all very colourful and stylised and just a nice break from the realistic graphics brigade that seems to have steamrolled E3.

Rare announced their new Xbox One exclusive Killer Instinct, to the joy of fans everywhere. Some gameplay was shown featuring Jago, Glacius and Sabrewulf. Also, there was apparently a rape joke made by one of the guys showing it off, but I and everyone else normal must have missed it. Oh the drama. Finally, from the creators of Panzer Dragoon we also saw Crimson Dragon, a Kinect-powered dragon-flying combat title that has been in development for almost as long as Duke Nukem Forever. Let’s hope it turns out better than that game did.

OK so that’s all the exclusives out of the way. It’s a good bunch, with Ryse as the only less-than-awe-inspiring title in the line-up. However, it wasn’t all about the exclusives that Microsoft had secured for themselves though, as Microsoft have also managed to bring a couple of previously Sony only titles into the fold. Metal Gear Solid 5 (or Red Dead Solid as it should be called) was the opening title for Microsoft’s conference, letting gamers know right out of the gates that they’d taken one of Sony’s biggest exclusives from them.

Although they weren’t shown in the Microsoft conference per-say, it’s also worth noting that both Final Fantasy 15 and Kingdom Hearts 3 will be multi-platform too, coming to both Xbox One and PS4. So Microsoft rolled out the exclusives and then stole a few other exclusives from Sony. Good stuff.

Microsoft also showed off Battlefield 4, which will of course be multi-platform but which has timed exclusive DLC for Xbox One. I’ve never been a huge Battlefield or Call of Duty fan, but Battlefield 4 looks astounding. EA are really pulling out all the stops to please the gamers this year, but we’ll save that for another article.

With the games wrapped up, Microsoft then came out and dropped the news everyone was waiting for: the price. This is where things took a turn for the worse for Microsoft as they announced that Xbox One would be launching at $499/£429/€499. Although somewhat reasonable for the US market, the price tag is hefty for the European and UK markets who are getting royally boned. At first glance it looks like gamers here in the UK we will be paying the equivalent of $170 dollars more than the Americans. Whilst it’s not actually that bad, as the US price doesn’t account for tax we are still getting ripped off here in the UK and Europe. I don’t know about you guys but I don’t like the way that cookie crumbles. Tag onto the price difference the fact that the Xbox One is only available in certain countires at launch and it paints a pretty ‘Merica-centric picture of Microsoft’s business plan here.

Even in the US markets though, $499 is a lot of cash, especially when Sony later revealed their next-gen console will be $100 cheaper than the Xbox One at launch. Microsoft really need to do some hard thinking between now and launch if they want to compete with the PS4. They need to either lower the price, drop Kinect 2.0’s mandatory nature and sell a console without it for cheaper or reveal that the Xbox One cures cancer.

Earlier in the article I said there was a lot of bad to be discussed, and yet you’ve just read ‘The Bad’ section and it totalled two measly paragraphs. Well the thing is, the bad comes from what Microsoft didn’t talk about, not what they did.

Microsoft completely ignored all the of the issues surrounding the Xbox One controversy, attempting to wow us with games rather than address the issues gamers really care about. There wasn’t a single mention of the used games issue which is weird considering they’ve very quietly released information that clears up most of the confusion surrounding this issue. Their actual used games policy is pretty much the same as Sony’s, with the exception that Microsoft have made it easier for publishers to add their own DRM whilst Sony have left it up to the publishers entirely.

The Xbox One’s online requirement, by which it has to check in with Microsoft every 24 hours to authenticate games, was also completely glossed over. There is no real defence for this implementation being mandatory, but if it must be then Microsoft should at least be straight with gamers and explain to them why it’s doing this. There is no reason I can see why Microsoft couldn’t have had the system they have now but with one difference; you can always play a game offline if you have the disc. They could have still had their weird cloud based system too, which is great in its own way, whilst supporting those gamers who don’t have access to a solid internet connection. Sure a few games would require online access to play if they used the cloud but the console itself wouldn’t be an expensive paper weight without the internet.

If you look exclusively at the conference and not the rest of the drama surrounding the Xbox One then it was a brilliant show from Microsoft. They brought gamers what they wanted to see: games and lots of them. But until they stop being so arrogant and telling the gamer that they know best, they aren’t going to be winning over the masses. Drop the always online for people who have the disc, clear up the used games nonsense and drop either the price or the Kinect. Then we’ll have a console war on our hands.