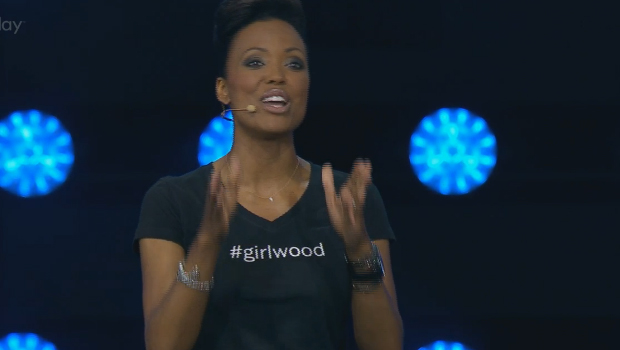 With how well Ubisoft presents themselves on average every year at E3 you would be forgiven for thinking that they have a console of their own. Usually handling themselves better than both Microsoft and Sony and packing more into their shorter time slot. While nothing can stack up to the family friendly image, Ubisoft always finds a way to make itself memorable in the sea of E3 news.

This year Ubisoft presented the usual rigmarole of new games and projects, except this time with a hefty helping of next-gen support. Old series making comebacks, new IP’s making names for themselves before launch and a few surprises along the way.

The show opened once again to the talented Aisha Tyler. While she cannot be everyone’s cup of tea, the beautiful 6ft amazon was entertaining and charismatic in a series of events that had so far been full of too many personality-less suits. After last years negative reaction accusing her of having no business at E3 as she wasn’t a “real gamer” her return was a good move by Ubisoft. Fully aware of this Tyler wore a short with “#girlwood” emblazoned on it. She didn’t let anything slow her down, stopping neither her obvious love for the medium or for hosting the event well.

Shine On You Beautiful Image Of Perfection

The games on display ran the gambit from footnote to jaw-dropping, so let’s get the smaller games out of the way first.

Ubisoft seemed to show as much love to Just Dance 2014 as to a puppy that just peed on your favourite pair of converse shoes. While Just Dance has never been at the forefront of every hardcore gamers mind, when it comes to E3 you either go big or go home, making me wonder why they even bothered to show it in the first place other than to say they are doing it.

The same can be said of Rocksmith 2014 Edition. Rolling out Alice in Chains front-man Jerry Cantrell to play a few short riffs and walking off to announce an updated version to a game is another case of shoe-horning in celebrities for the sake of having a little star talent. While the expanded options are sure to be well received, opening the show with it seems like a wasted chance to instead show off one of the other larger games. The opening moments of an event set the tone, so do you want to start with fireworks or a match?

Splinter Cell Blacklist also made an appearance, mostly to remind fans that the series died a long time ago. While it tried to stress the stealth elements, the damage is already done after the previously released footage of Sam Fisher gunning down more men in slow motion than a John Woo film.

The Mighty Quest for Epic Loot was a pleasant surprise, especially with the announcement that the game is ready for open beta and can be applied for now. The trailer shown was highly amusing, particularly so for those who are fans of Insomniac’s Captain Qwark character.

Sadly The Sword Ruins The Ensemble

Rayman Legends turned up for a short visit, presenting a “story” trailer. I say “story” because just like Origins before it, the plot is paper thing, and that works to the games sense of humour. Giving the world as little context as possible helps keep the air of surreal mystery that pervades the recent series iterations. The art work was once again beautiful and made me want to watch Saturday morning cartoons in my underwear again. Capturing childish glee through visuals alone is difficult, so hats off to Ubisoft for doing it a second time running.

The next surprise came from the development of a Rabbid themed TV show that will be interactive. Using motion cameras players, mainly kids, will be able to take part in the Ritalin infused antics of the series mascots. While I’m sure many parents will be pleased at the mini-game where kids have to scream as loudly as possible, it does seem like the next step for a series that has released one to many party games.
The Trials series will apparently be getting not one sequel, but two. One game will be playable on consoles and the other on mobile, in some way designed to “compliment” each other. I would like to see how on man bailing through fiery hoops compliments another doing loop-de-loops but I’m sure it will be revealed at some point soon.

The Soon To Be Faces Of Evil For All Parents

Ubisoft showed off a great trailer for The Stick of Truth which seemed ripped straight from one of South Parks better episodes. No gameplay but I guess who needs that when you are laughing at Randy Marsh farting on a ten year old. The game will be coming out this holiday season, so not long to wait to see more gameplay anyway.

Assassin’s Creed IV Black Flag made an appearance with a pre-rendered trailer shortly followed by a gameplay trailer. The CGI trailer presented Edward Kenway in a good light as an equal opportunities employer and ass-kicker with some very pretty flintlock pistols and duel-weild stabbery. Once again showing off Ubisoft’s good choice in trailer music, the second trailer did a good job at showing off some wonderful environments, which more than what Sony managed at their conference.

The darling that is Watch Dogs made a short pre-rendered appearance with a trailer that was leaked the day before. While there was nothing Ubisoft could do about this some gameplay to compliment the trailer afterwards would have been great. Sadly not however, with Ubisoft slowly dripping footage out to make sure we all stay interested. Damn you you clever buggers. 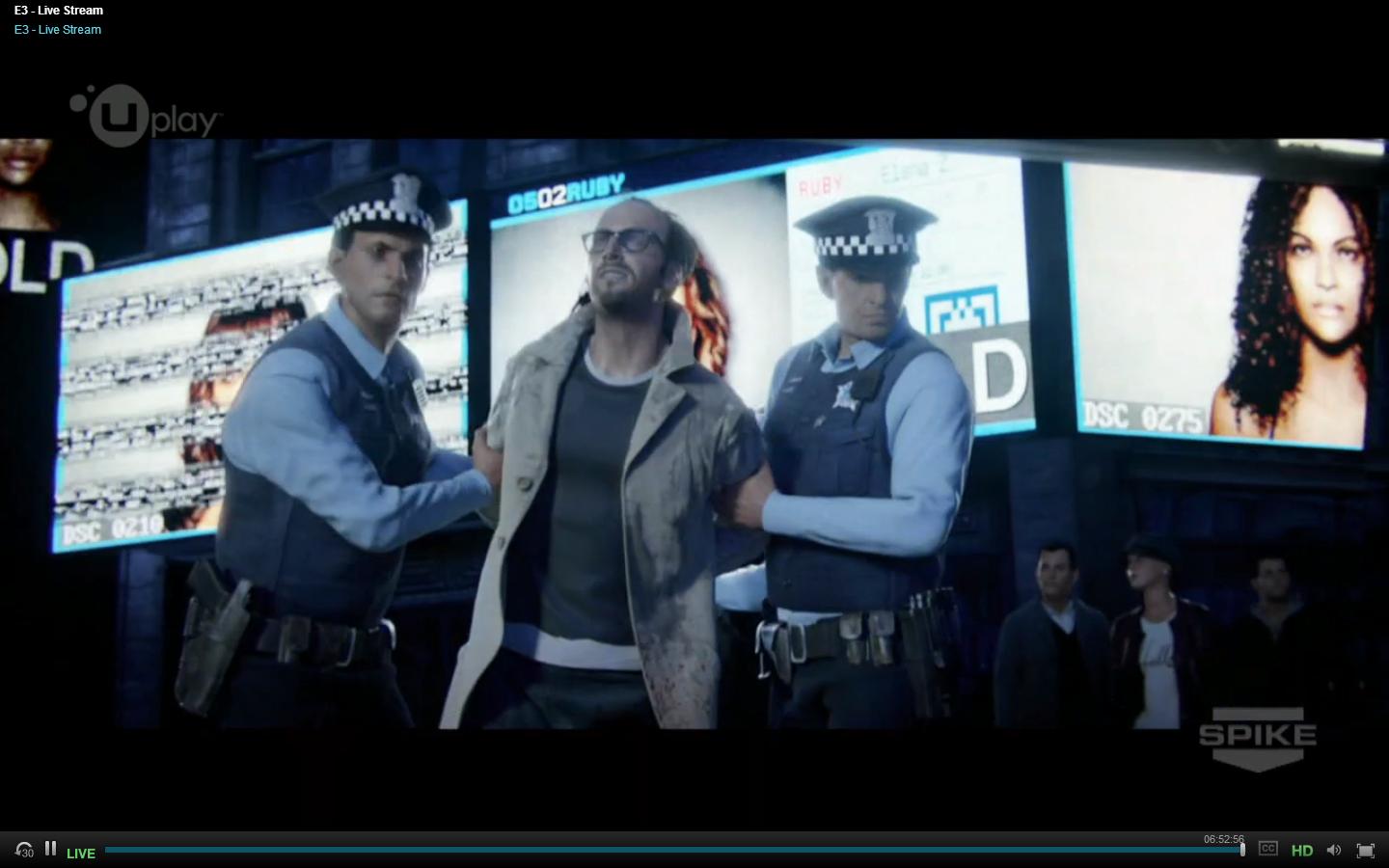 After One Too Many, Patrick Wilson Was Escorted Home

The two last games were the most interesting.

First new IP “The Crew” seems to offer a free-roam multiplayer driving experience across a condensed America. Players zipping from one major city to another completing everything from time-trials to taking down targets as cops reign down from every direction. Other player cars and groups can whizz by on whatever activity they are up to, and custom cars are sure to develop an interesting online community.

With tablet functionality that allows gamers to customize their own cars from the ground up, that can then be transferred into the game, Reflections has put some serious though into making another fun driving game after Driver: San Francisco.

The game that was most interesting however was the game Ubisoft left until the end. Starting off with a rather dry into about the economy, sociology and the nature of pandemics, the image of a snowy, ragged Brooklyn changed focus. Putting that focus on the shoes of an unknown player character a small team of characters explored the deserted streets. It wasn’t long until they came under fire and they raided a building looking for supplies. Finding a new weapon in a crate along the way, the game seemed like a more close to the bone take of Borderlands.

The game looked great, with small details likes characters reaching out to close doors adding an extra touch of realism and personality.

Humans don’t seem like the only danger either, with the brief glimpse of wolves seen through cracked doors. Seeming like a mix of Red Dawn and The Day Before Tomorrow, the trailer ended as the group left the building and once again came under fire, revealing the game to be the latest Tom Clancy game “The Division”.

Much like the Watch Dogs reveal from last year, The Division immediately left many gamers a little awed. Described as a new “Multilayer RPG” for the next-gen I am sure Ubisoft will play the cards close to their chest on this one for the moment. Until the time they reveal them however I am hooked.

Ubisoft’s press conference for the most part was highly entertaining and gave us both a bit of what we expected and a small bit of what we didn’t. While not the most mind-blowing of E3 conferences, it did very little wrong and a large amount right. They used their limited time to their advantage, giving viewers a taste of what’s to come, but not much more. In the end it was short, sweet and left many gamers intrigued as to what will come next from the French developer and publisher.