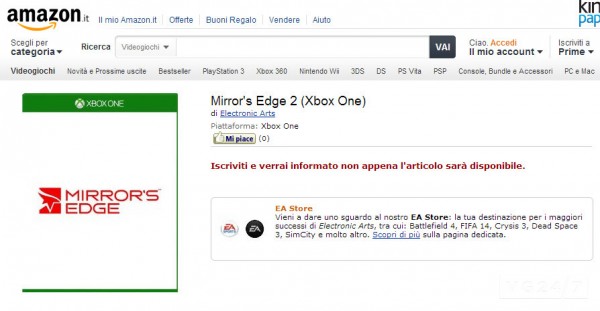 Amazon Italy recently had a listing up for Mirror’s Edge 2 for the Xbox One, since it’s discovery amazon has taken the the posting down but screenshots like the one below are popping up all over the Internet.

The box art is an obvious mock up and the listed release date was January 1st 2020 but the story is given more credibility as last week the same game appeared on amazon Germany for Xbox 360. EA spoke about the incident to IGN saying:

We appreciate fan enthusiasm for Mirror’s Edge, especially fans throughout the retail channel. This is not official EA material. We have nothing to announce at this time.

Further evidence for the sequel popped up yesterday as a help page for the game was spotted on EA’s own website. While the name is only holding the page, the same directory for Mirror’s Edge 3 does not exist.

What do you think about the evidence presented? Mirror’s Edge 3 confirmed or merely speculation? Let us know in the comments.