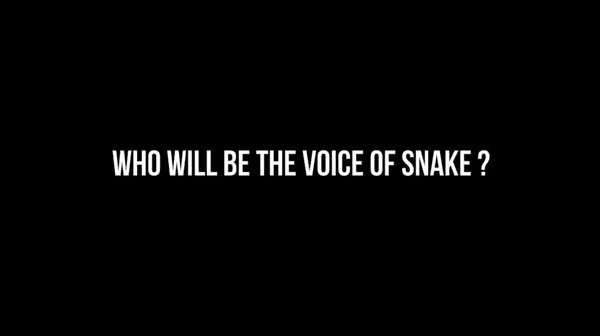 Hideo Kojima has spoken to his fans about the next Metal gear Solid 5 trailer. Via Twitter he mentioned that trailers these days have a lot of explosions, crashes, destructions and falls. Kojima says he will be intentionally avoiding these elements from his next trailer.

Trailers these days has lots of explosion, crash, destruction, and fall. I intentionally avoid those elements in my next trailer.

A follow up tweet also stated that there will be plenty of gameplay in the next trailer and involved a lot of time editing and recording.

Its time consuming since there’s lots of game play scenes in the next trailer as it involves too much work besides editing but recording+.

With the Konami E3 Pre-Show coming next week, Hideo Kojima is looking to ensure that there is plenty to take away from the Metal Gear portion of the Konami conference. One particular thing to take note of is a teaser video from Gamespot.

The caption at the top reads, “Who will be the voice of Snake?” This could well mean that the new voice actor of Big Boss will be revealed at the E3 Pre-Show. Fans are still holding on to the idea that this was all just a ruse and that David Hayter will be back voicing the legendary hero. We’ll find out in just over a week. Let us know if you’ll be catching the Konami Pre-E3 Show for not only Metal Gear, but also Castlevania and a bit of Pro Evolution Soccer, too.