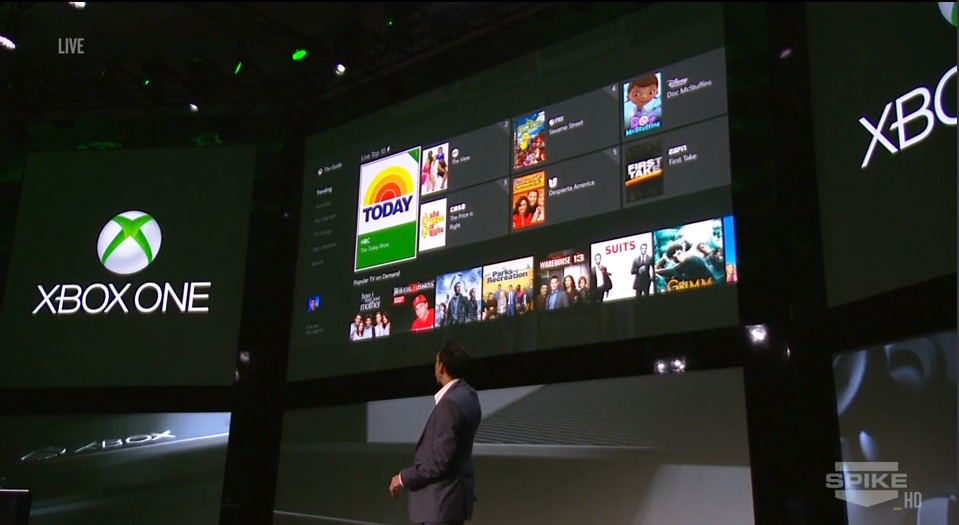 So Microsoft has been busy working away on the Xbox One reveal. Having had a late start behind the Playstation 4 and the Wii U, Microsoft needed to make a solid impact to get ahead of the competition before E3. Did it actually succeed though?

Things started off well, getting straight into the name of the new console, new Kinect and what the console will look like. While it may be a heavy looking brick of a console, it is one step ahead of Sony who are yet to show what their next-gen machine will look like.

Aiming to consolidate the living room experience into one box, the Xbox One wants to unify watching TV, exploring the internet and gaming. Sadly however this is where the presentation span its wheels. With the short space of an hour to get some good pre-E3 hype, Microsoft spent nearly half of their time showing off how the console can be controlled and how easy it is to flip between different functions.

Cool I can lift my hand up to flip between menus, cool I can shout “Xbox game” to get back to shooting people over the internet, but some of these features aren’t new. The console also will not work at all without the Kinect. This has to jack the price point up at least an additional £50-£100, so if you want to do all of those slick motions you will need to splash the cash.

When you think Xbox you think Drew Carrey gameshows

Finally Microsoft move onto their games, but what do they open with? A brand new IP like sony? A new long-sunning mascot vehicle like Nintendo? Microsoft probably has access to both of these. No, instead of going for a game that could present the power of the Xbox One, EA shows off a pre-rendered trailer for their new series of sports games. Not exactly fist-pumping, heart pounding action after the long build-up. The sports game market is big, but I wouldn’t call it the best premier of gaming.

Moving on Remedy show off a half live-action, half pre-rendered trailer for “Quantum Break”. A shock, as it was assumed Remedy’s next game would be Alan Wake 2. While the trailer didn’t show much off apart from a mysterious girl and a bridge getting wrecked, it at least was a little compelling by not giving away too much. Still, rather disapointing as it didn’t show off any gameplay or any more details apart from the name.

Now for something surprising. A Halo live action TV series in conjuction with Steven Spielberg? Now that is a little more like it. Not gamig per se, but definitely something hardcore Xbox fans would want to hear. While there was no trailer, no images to savour it was still something to look forward at E3.

The penultimate game shown was Forza 5, showing off even more impressive car reflections. A long standing Xbox exclusive series is coming to Xbox One, hurrah! Ticks all the boxes minus actually showing the game.

The final announcement was of course the largest, Call of Duty: Ghosts. We got some gameplay, we got a small technical run down of the games technology and some new features and a trailer with no dubstep. The best was saved for last. Showing off realistic dogs and HD arm hair it attempted to show off the power of the new console. Sadly however it wasn’t that impressive. There are current gen games that are of the same standard.

Heroin Hero would look brutal in this engine

The event seemed to be made for the sake of saving time at E3, an extended preview of a major announcement. It is understandable that they needed to make an noise over their new next-gen piece of hardware before E3, but more time and care should have been taken to get the best out of the time they had. Instead of focusing as much on menus design, voice-commands and unifying the living room they should have focused on what makes it a console, the games. Where they spent time swiping at the screen, they should have been wowing us with how shiny the games look, how they want to blow us all away.

Perhaps E3 will be a turn around, but this hour long announcement failed to get the hype pumping as much as the Sony event. Sony spent minimal time showing how the UI has changed and the majority of the event presenting their games and how the console can give us new experiences.

Taking apart the Xbox One is not recommended

To add insult to injury Microsoft has confirmed that to play pre-owned games players will need to pay a fee to Microsoft. A ballsy move, but that hits players write in the wallet. This money is also not likely to go to the games developers, but instead right into Microsofts pocket. Another issue is that playing these pre-ordered will be impossible for offline gamers as they will not be able to “unlock” their game.

In all the event seems like a missed chance that Microsoft used as a chance to shove the information out with minimal effort. While it wasn’t insultingly bad, it was boring and uninspired. This does open them up to jump right into it at E3, but they have a lot of distance to cover to make up for this event.