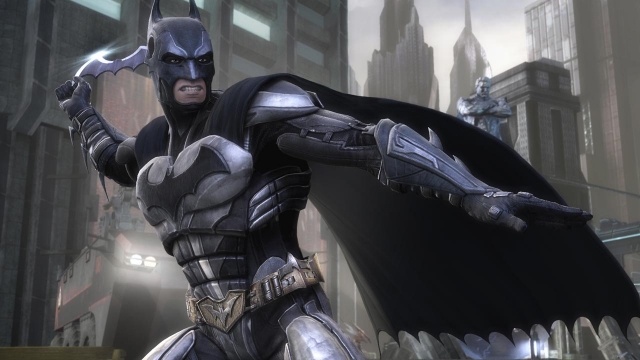 Whilst the finals of the Battle Arena are currently underway, the demo for Injustice: Gods Among Us is available to all DC fans on the Xbox 360 and PS3. The demo finally gives us the chance to have a hands on experience of the game before its release, but does it stand up to our expectations? Let’s have a look and find out.

The demo allows you to play a series of four fights in single player and even duke it out with your friends on local co-op multiplayer. There are only three characters available to play due to the demo but their fighting styles are so different that it opens up a lot of variation for these three characters alone. The available fighters are Batman, Wonder Woman and Lex Luthor.

After playing the single player with every character you can see that the combat is really easy to get into. The biggest problem with most new fighting games is to create a button layout and combo list that is both easy to learn and easy to get into. Injustice ticks both of those boxes as you will be able to string together combos easily whether you tend to use a standard controller or a fight stick. A cool feature that is also available in the single and multiplayer is that you can pause the game, check out your move list and then assign moves to appear on the screen underneath your health bar. This allows you to learn the combo’s on the fly and truly get your game on to a new level.

So how do the characters play? The answer, really well. From the detail on their default skins to the animations as they flow from one combo to another, the fighters themselves feel really good to play. For Batman you can feel his agility and cunning, for Wonder Woman you can switch out between a floating mode with the lasso of truth and a more damage dealing mode with her sword and shield. Finally, Lex Luthor can truly be a dominant force with a lot of interrupt abilities with his shield and some great damage dealing potential with his mech suits’ combos.

After you win the battle you have a small moment with the character leaving the battlefield and entering their own unique backdrop at the end of the fight. These feel and look great but do seem to lack variation. The fighters in the demo always seem to have the same ending scene which can become very boring if this is to be in the full release. This is definitely apparent if these scenes are played after fighting every battle in the campaign mode, but if it is going to be anything like Mortal Kombat the campaign’s narrative will make sure that these scenes do not occur. A little variation can go a long way so I hope there is at least some variants in the full release.

Overall the demo was pretty solid. The game feels great and it is a heck of a lot of fun to play. So if you want to get your hands dirty and fight some of your favourite heroes and villains from the DC Universe, be sure to pick up the demo today on your PS3 or Xbox 360 and let us know your thoughts on it in the comments below.