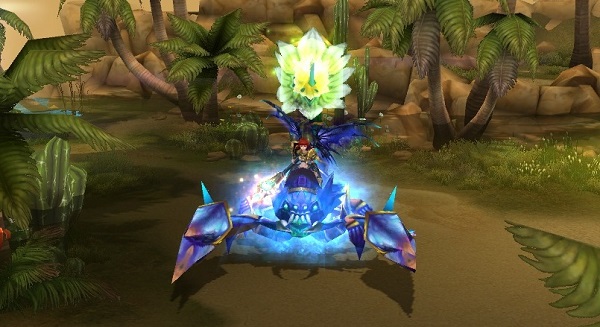 The Lost Titans, developed by ZQGame, is currently in closed beta but will be making its way into the second beta phase on the 18th April. This will include a host of new updates and features.

The free-to-play browser-based MMO intertwines Egyptian, Greek and Roman mythologies and sends players through the world of Aristos to save their Titan Lord Hyperion and restore order to the land.

The initial beta phase launched November 2012, and the feedback gained so far has allowed for many improvements and additions to the game. This next beta phase aims to give players a more balanced in-game economy and better localization, along with a bunch of new content including:

You can check out some images of one of the new mounts below (a giant scorpion-type thing? Cool!)

Additionally, ZQGame are celebrating Easter and April Fools Day with a special Troll Week collection of events, including:

– Easter Bunny’s Nest Egg: Buy two, get one free for all Gold purchases until April 2nd

– Me N’ My Buddy: Fool your friends into believing you are BFFs with World Boss or Artifact Thief by capturing a screenshot of your character with them in-game. Post the shot on the forums to earn rewards – bonus points for Photoshop creativity (I can see this not going too well…)

– Hide and Shriek: Stripped of all gear, players have 60 seconds to hide from the participating GM in the PvP Zone of the Arts. If you get spotted, you need to either run or stay hidden, as the GM will attempt to kill you on sight

– Troll Ophion’s Forces: Ophion’s troops have gathered covert intelligence about Aristos’ Warrior of Light! To avoid having their identities and knowledge of their strengths and weaknesses exploited by Ophion’s troops, players can rename their characters. You only get one rename scroll, so you need to choose whether you want to change your name forever or risk discovery.

You can find out more details on the game and the second beta on The Lost Titans website, including how to sign up for the beta.

Does this look like the game for you? Give us a shout in the comments and let us know what you think of it if you’ve been playing so far.