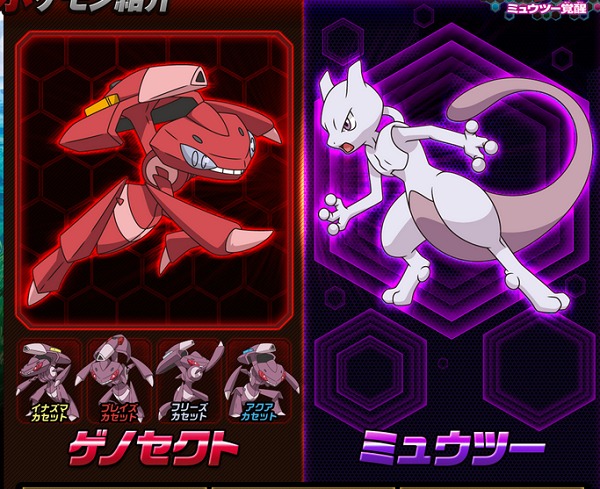 Rumours can be delightful and entertaining things, and the newest Pokemon games are certainly not shy when it comes to rumours! From the new Eevee to pre-named characters, both fans and the industry seem to have been getting very creative. However a new rumour, one with the possibility to either excite or enrage older Pokemon fans, has come to light. Could there really be a new Mewtwo form in the works for Pokemon X and Y?

NowGamer has been investigating around the Japanese Pokemon movie website and may have stumbled on to something interesting: a reference to ‘Godspeed Mewtwo’ in the source code of the site. While this may not be much to go on (it could be a new form or it could literally mean Goodbye and Godspeed Mewtwo!) it is certainly a start when coupled with something else they found on the Japanese site.

An image on the website potentially shows there may be two new forms for the famous Pokemon. You can see the image below, where we explain where this reasoning has come from.

The reasoning behind these two new possible forms is because of Genesect. The forms below the main picture are the different types you can get based on the Drives it is holding (similar to how Arceus changes type based on what plate you make it hold). There are a total of 5 forms, and because the Mewtwo on the right shares a similar design and there are two ‘blank’ areas at the bottom, it suggests there could be another 2 forms of Mewtwo coming. Will it change when you make it hold a specific item? Or are there other strange conditions you need to fill in order to get it to change? Who knows at the moment.

This ‘new Mewtwo’ theory is also backed up by a scan of a Japanese magazine which has been circulating the internet the past few hours.

This image is a scan from a Japanese magazine that shows a very different Mewtwo to the one we have known and grown up with. The tail appears to have been removed and the head features not only a sharper design but also a new ridge – what happened to the mystery Psychic Pokemon we knew and loved?

At this point I would treat these sort of images as fake, although a nice attempt from someone. While Nintendo did say there would be updates for Pokemon soon, I’m hesitant whether there is any credibility to the fact that there could be new forms of Mewtwo. Believe it if you want, but we at VGU are definitely saying that this is an unconfirmed rumour and might just turn out to be a late April Fools or a joke.

UPDATED: It turns out this rumour was true! Check out our other article for the official images!

What do you think, would you enjoy using a new form of Mewtwo or did you prefer the original? Let us know with a comment.