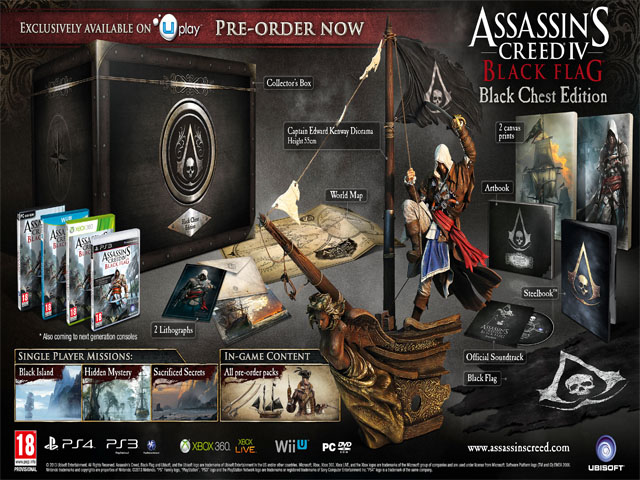 Today, Ubisoft announced details for the Assassin’s Creed IV Black Flag Collector’s Editions, available exclusively in EMEA territories for the Xbox 360 video game and entertainment system from Microsoft, PlayStation 3 computer entertainment system and PlayStation 4 from Sony Computer Entertainment Inc., Nintendo Wii U system and Windows PC versions of the game, along with a new online VIP program called THE WATCH. The editions are as follows (full details below):

THE WATCH: A new VIP program accessible as a pre-order bonus
In addition to exclusive bonus in-game content for customers who pre-order, a unique activation code will also be provided via select UK retail (Game, Amazon and GameStop in Ireland) or Uplay, granting access to the Assassin’s Creed VIP program: THE WATCH. THE WATCH offers unique content that goes deeper into the Assassin’s Creed universe, granting exclusive access to additional information, bonus content, rewards and the opportunity to take part in an exclusive quest designed specifically for VIP members. Customers who register for THE WATCH will become a member of a select community of Assassin’s Creed fans who can participate in online discussions, upload their own content and compare their skills and achievements! More information can be found on the official THE WATCH Website.

A new high quality figurine, Edward Kenway: The Assassin Pirate, is also available for pre-orders starting today on Uplay, displaying Edward in a Mayan ruin, ready to fire his guns at his opponents. This premium collectible item will also include bonus in-game weapons and skins and will be on sale in October 2013.

The Black Chest Edition (Uplay exclusive)
This prestigious edition includes everything a true Assassin’s Creed fan could desire and a very limited quantity is available for pre-order exclusively via Uplay by visiting the Ubisoft shop.

So what do you think of the collector’s edition of Assassins Creed IV Black Flag? Does it cater to your inner pirate or does it sink your ship? Be sure to let us know what you think in the comments below and check out more information on the assassins creed website and facebook page.