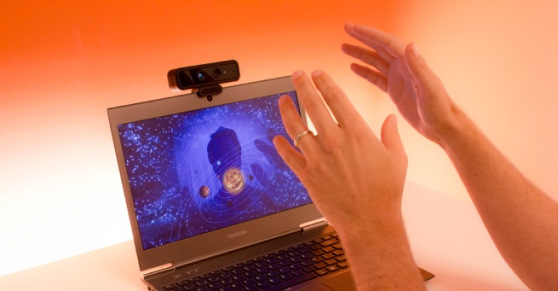 Since the days of the Playstation 2’s Eyetoy, gesture and montion controls have come leaps and bounds; from the Wii, the Playstation Move to Xbox Kinect. The influx of user gesture controls over the usual gamepad set up has opened the doors for more and more technologies to be combined with gaming and last month SoftKinetic showed off their technology to the likes of Marvell, Intel and more at the Mobile World Congress in Barcelona.

Attendies to the event had the chance to use a smart TV interface powered by Softkinetic‘s depthsence 311 camera and iisu middleware which can be controlled completely by gesture.

“Gesture-based controls and recognition are quickly moving into many parts of our daily lives – from the living room to the office and beyond. As an established leader in this field we are working with a number of high profile companies to bring this technology to market,” said Michel Tombroff, chief executive officer of SoftKinetic. “We are excited to help power both close interaction and long range experiences with such an esteemed group of partner companies at this year’s Mobile World Congress.”

With the increased amount of 3D technology available to home users and the massive leaps forward in gesture and motion control that Softkinetic are helping to work towards, could be soon be at the stage of having virtual reality like games in our own living rooms?

What do you think of gesture control technology? Are you a fan or do you prefer the classic game pad? Let us know in the comments below!

Kickstarter For The iMotion Goes Live
Powered by Magic