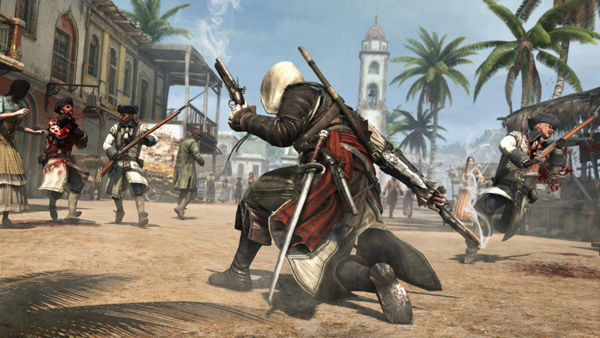 This really does not seem to be Ubisoft’s weekend. First one trailer leaks showing their new protagonists bad-ass moves, and now a second one leaks with a bunch of screenshots.

While once again the trailer was quickly removed as soon as it appeared, this trailer was a much more slow paced affair. The short trailer is the “character introduction trailer” showing off little more than a few frozen tableaus of Edward Kenway shooting, stabbing and at one point smashing a mans face in with a bottle. Could this be a new feature? Who knows at this point, but it would fit with the improvisational element of the Assassins Creed series.

Another interesting point is the trailer calls Edward “a pirate trained by Assassins”. This may indicate that once again the series has the character discover the Assassins rather than being born into it like Altair. This is pure conjecture however until a more official announcement is made.

Until the trailer is officially released here are the leaked screenshots. They were scheduled to be unveiled early next week so hopefully it won’t be too long before they appear again.

5 New Things in the Assassins Creed Origins: Hidden Ones DLC
Powered by Magic