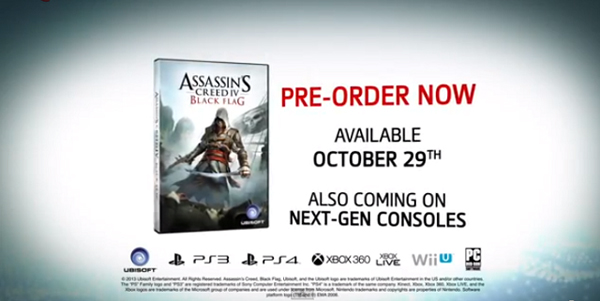 Assassins Creed IV is taking the odd turn of taking a step backwards in time, instead of slowly coming to modern times as the games have been. The leaked trailer gives away a few more details about the next game featuring Conner Kenway’s grand-father Edward. The game will seem ot take advantage of the sea-faring portions of last years Assassins Creed 3.

The trailer features Black-Beard speaking in third-person (which is never cool) discussing the much feared pirate over a pint of grog in a dank bar somewhere in the Caribbean. Quad-pistols and dual-wielding featured prominantly, as well as assassinations in small colonies filled with wenches and tri-corner hats.

Details given away at the end of the video reveal the game will come out October 29th on current and next-gen consoles.

The trailer promises a limited edition poster drawn by Todd McFarlane for anyone who pre-orders the game.

Hopefully it won’t be too long until the trailer is made available again for those who missed it.