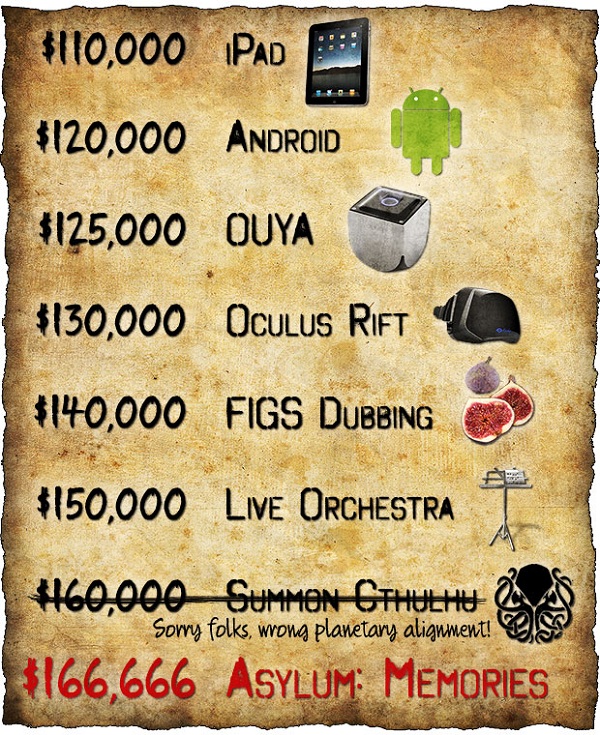 Kickstarter certainly seems to be the place to go if you’re wanting to fund your own game, with Asylum joining the ranks of successful funding campaigns. It has successfully reached the funding goal of $100,666 over the weekend. With this in mind, Senscape intend to bring Asylum to completion and release before the year ends.

There are still 48 hours left though, and Senscape has a bunch of exciting stretch goals already in mind, including versions of Asylum for iPad, OUYA, and Oculus Rift virtual reality support (I’m really excited about this one!). You can check out the rest of the stretch goals in the image below or head over to their Kickstarter page to find out more.

The final stretch goal of $166,666 is a complete rework of Asylum, dubbed Asylum: Memories. It will feature a brand new story that sees you going back into the aslyum in broad daylight, which is intended to be distributed as an expansion in 2014 and will be given FREE to every backer who pledges $15 and above.

You can check out the pretty awesome preview video below. “Whereas the original game is gritty, dark and oppressive, the additional content will be dreamy, melancholic and beautiful” says Agustin Cordes, lead designer and founder.

Looking forward to the horror game? Let us know in the comments, especially if you’ve already pledged or are planning to pledge.