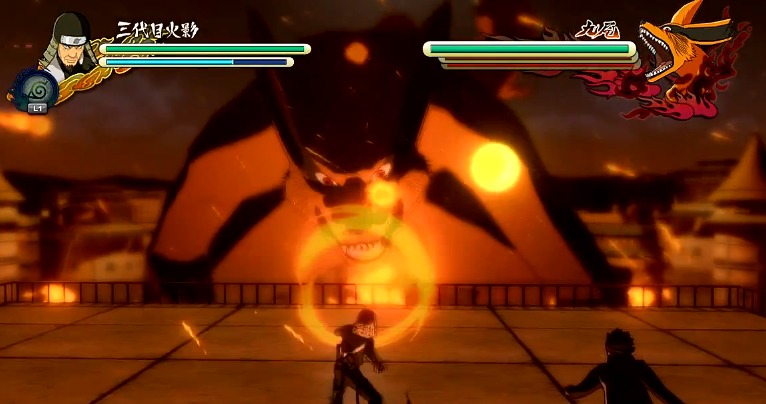 The Ninja Storm series of Naruto games have always been held in high regard for gamers and fans of the Naruto series with average and positive review scores across the board for all of the titles in that particular set of Naruto games. Naruto Shippuden: Ultimate Ninja Storm 3 is latest title in the series picking up where Naruto Shippuden: Ultimate Ninja Storm 2 left off and will start with the player fighting the Nine-Tailed Fox to then covering the Ninja war based off the latest episodes of the television show.

The demo starts out with a scene showing the Nine-Tailed Fox’s initial assault on the ninja village and we are introduced to the 4th and 3rd Hokage’s as they try to defend the village from the beast’s assault. While the 4th distracted, the 3rd takes the lead to counter attack the Nine-Tails, this is where you take control and fight using the 3rd Hokage.

This battle has you jumping from building to building at high speeds in order to dodge the Nine-Tail’s attacks and dealing it damage via shuriken and hitting it with your giant polearm at close range. It is very exhilarating as you fly around at top speed and battle this behemoth face to face, the tone of the environment and the intense music really drive home this boss battles powerful feel while also making you feel strong for just engaging it. The controls easy enough to pick up which is great as the situation is so dangerous you have little time to worry if you are doing things right, this also drives home the fast paced of the battle and allows you to whale on the Nine-Tails right from the get go.

However, to deal the most damage to the beast you have to use the quick time events which involve you pressing specific buttons to activate and use various other teams of ninja’s abilities. While it is annoying that these quicktime events are included the cutscenes that play after activating them are well worth the brief irritation and if you are a fan of the series you will love every second.

This boss battle is a great example of what is to come in Naruto Shippuden: Ultimate Ninja Storm 3 and does a good job of coming off as “epic”, this also sets up the next battle perfectly as you go straight from battling the Nine-Tails to now be in control of the 4th Hokage as he battles a mysterious masked ninja (No spoilers here folks, play the game to find out who it is!)

This is what the main area of the Ninja Storm series of games is about, the fast paced 3D angled fights which, despite being less complicated compared to most fighting games, are much more hectic and fasted paced than normal. Both characters have a range of abilities for you to use and fly around the screen in ways akin to the actual television show and manga. This is the main selling point of this game in my opinion, this style of fighting is just so freaking cool, they all seem like they could be lifted right out of the show which is not only appealing to watch but is fantastic to experience if you like the Naruto series.

The control scheme is also very simplistic; you have your basic ranged attack, melee attack, power up command, jump, guard and dodge which can all be combined together to pull of some amazing stunts and actions in game which are not only amazing to watch but can do some serious damage if pulled off correctly. The demo obviously takes it very easy on you so you can get a feel for the controls quickly and at your own leisure. This is great for this section as you can really explore what the various combinations and actions can unleash which allows you to become more efficient in battle.

After defeating your opponent the demo is basically over after another small scene that’s shows off some new features and characters that are avaiable in the game as well as some interesting downloadable content!

This demo does the job it needs to do, it really gets you pumped up while fighting and really leaves you wanting more. With its anime visuals and over the top and explosive combat it really makes you look forward to Naruto Shippuden: Ultimate Ninja Storm 3. The only real shame is how short this demo it is overall, having another standard battle with another character or being able to play the fight from another characters perspective would have been great to see!

You will have no trouble playing this demo through, even if you are a fighting game beginner or not a fan of the Naruto franchise, it is very simple to pick up and I think everyone will appreciate the feeling you get while fighting. I am not the biggest fan of fighting games but this one may just end up changing my mind!