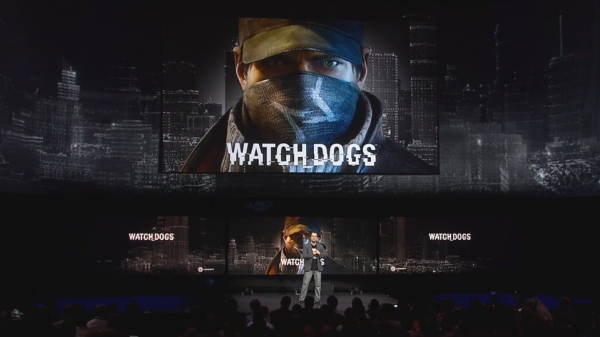 At the Playstation conference, Ubisoft announced their new game for the Playstation 4, Watchdogs. This highly ambitious project is set to blend cutting-edge technologies and sophisticated game design into a realistic, living open world.

In Watch Dogs you get to experience the realities of living in our fully connected society, where individuals and corporations are at risk of exposure by our ever-increasing reliance on networks and technology. Invade everyone’s privacy, tab into anyone’s life as you walk around Chicago city.

You assume the role of Aiden Pearce, a new type of vigilante who uses his hacking abilities (along with a suspiciously iPhone-like phone) to hack into Chicago’s central operating system and control almost every element of the city. The city of Chicago is now your ultimate weapon. A game play demo of the game was shown in the conference with impressive results. The game mechanic of being able to hack into any NPC’s bank account or any personal details is something very fresh within the genre.

This was a live tech demo, and you can see some screenshots of it below.

Watch Dogs has now been confirmed for a Wii U release as well as Playstation 4. This day just keeps getting better! You can now also watch the video straight from the announcement with commentary below.

Looking forward to Watch Dogs? Let us know with a comment.