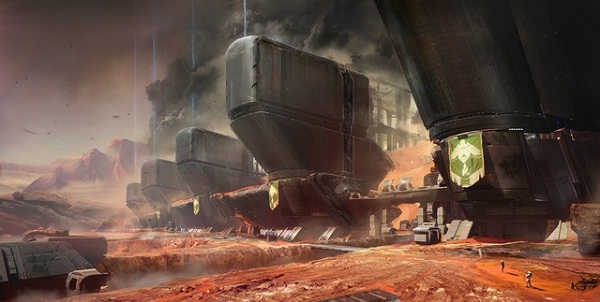 “Destiny is our next great shooter in a totally new world” commented Jason Jones, co-founder and Halo mastermind at Bungie, on their latest always-online first person shooter.

Bungie announced details for their first post-Halo project, which has been described as a first-person shooter for Xbox 360 and Playstation 3 with elements of open-world sandbox and persistent world. It is a quasi-massively multiplayer sc-fi experience that is fully capable of being played solo, but unlike some MMO type games there won’t be a subscription fee. It definitely appears to be an ambitious project so far!

Another thing to note on the social side is that, while you can buddy up with your usual friends and slaughter some aliens together, the world will be populated with total strangers that were brought together by chance. Destiny constantly talks to the servers to find out if players are on the same mission or are simply in the same area. If it finds several people with a good connection they are put together in a shared experience, and has a seamless way of doing so. Bungie wants you to feel like these are ‘chance encounters’ where you can either forge lasting alliances or simply part ways after collecting the loot and and finishing a successful mission. On top of this you also have social hubs where players can trade goods, gamble or take a break from the game’s optional ‘activities’. While is has these social aspects, Bungie reiterates that this isn’t an MMO.

Destiny bears some similarities to the Halo universe, with the fact that once again humans are fighting against another hostile alien threat (aliens just don’t seem to like us at all), but the world is a lot darker. Humanity is in pretty bad shape, holed up in the one remaining city on Earth and the rest of the planet lies in ruins. Nature is reclaiming what the alien’s haven’t already invaded, and it’s pretty much the end of the world. Yet despite all this Bungie use the words ‘hope’ and ‘hopeful’ in bucketloads. Joe Staten described the story as “at it’s core, Destiny is a hopeful world. It’s a place worth spending time in. It’s a place worth fighting for.”

Combat appears to be both an FPS and a vehicle based game, and the vehicle appearance will be class-based. Speaking of characters, you create and customise your own character and can choose from classes such as the Titan, the Warlock and the Hunter. You can check out the concept art for this at the bottom of the article, and you can see the video that goes with the news below.

Destiny is predicted to be released in 2013, and it’s looking pretty ambitious. What do you guys think of the game so far? Let us know in the comments, and don’t forget to check out the concept art while you’re here.