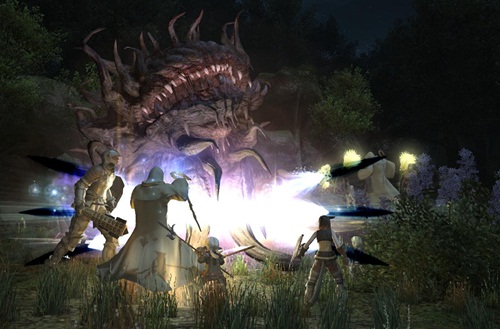 “Hello again to all of you eagerly awaiting FINAL FANTASY XIV: A Realm Reborn. Yoshi-P here, and I survived my flight, allowing me to bring you the forty-third Letter from the Producer from San Francisco! (I don’t know why I have to fly everywhere). I’m sorry for taking so long to put up this letter, but the news you’ve all been waiting for is finally here. Assuming no dastardly bugs or server errors slow us down, phase 1 of the beta test will begin on February 25!”

If you are a fan of the Final Fantasy Series make sure you should really check this beta out, it looks to be a vast improvement from the original version of the game! The beta will feature a new Full Active Time Events (FATE for short) as well as new dungeons design for Level 30 characters and the new guildhest system, which is slowly being implemented, as an upgrade from the behest system in version 1.0 of the game.

According to the beta test roadmap this is what will also be in phase 1:

-Phase 1 characters will be deleted at the start of phase 2.
– The data center will be located in Japan.
– Between 5 and 10 Worlds will be available.
– All races and genders will be playable.
– Certain customization options will be unavailable until phase 3.
– The level cap will be set to 35.
– Eorzea time will be implemented (morning, afternoon, evening, night, etc.)
– All Legacy status holders qualify as testers in phase 1.
– The following will be implemented for testing:
Main scenario (partial) / Sidequests / Class quests / Full Active Time Events
Hunting Log / New behest / Dungeons (up to level 35)
Opening event (excluding CG movie) / Cutscenes / Player Search
Markets / Item Search (text strings, HQ, materia, etc.) / Other
– In addition to the above, the following is also scheduled:
Fall damage testing / Alpha feedback revisions (part I)
Alpha UI feedback revisions (part I) / Graphical tweaks
Performance optimization

Will you be joining the beta? Are you looking forward to the reboot of Final Fantasy XIV? Let us know in the comments below!