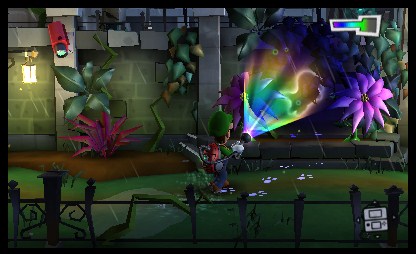 In the Nintendo Direct presentation today, 2013 has been dubbed “The Year of Luigi due to the number of games that the lesser loved plumber will be in this year! Shigeru Miyamoto started off this Luigi feast by revealing more features in Luigi’s mansion 2 which included the new features of the poltergeist vacuum as well as new mechanics involving light and finally the varying ghosts the player will meet. The multiplayer mode also was expanded on and showcased the co-op involved in varying game modes which are looking to be really fun!

Next, a new Mario and Luigi RPG game, Mario&Luigi Dream Team, was teased. The game features Mario using Luigi’s dreams in order to advance through levels and to give him extra abilities in combat and is looking to be released in summer this year. As a fan of the Mario RPG series I cannot wait for this one!

Continuing with the Luigi theme, additional content for New Super Mario Brothers U was revealed, New Super Luigi U! This is an entirely new large scale DLC focusing on just Luigi and will be released later this year on the Nintendo eShop; it’s nice to see Nintendo giving the other brother some more love!

Finally, it may not be starring Luigi but he will be teeing off with older brother Mario and the gang in the newly announced Mario Golf 3DS game set to be released in summer this year. The developers are looking to restore this old title back to its former glory and are using the 3DS to do it! The game is set to be released this summer and is something fans of the series should watch out for.

The Year of Luigi is looking to be pretty amazing so far, and the best part? This is not even all the news from the presentation! Check out VGU’s other Nintendo Direct article for a full list of all the other games and special packs announced and revealed for Europe. Nintendo are on a role with announcing news right now and we at VGU cannot wait to get further into 2013 to try these new titles out!

What do you think about “The Year of Luigi”? Does it sound awesome or lame? Let us know in the comments below!