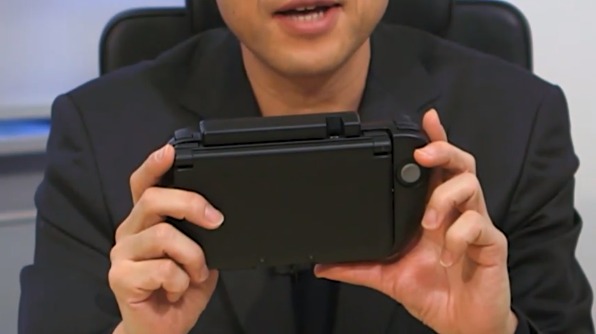 In the Nintendo Direct today Satoru Shibata announced a heap of new content for Europe coming out in what Nintendo are calling the “Year of Luigi.”

Monster hunter 3 is coming out on 22/03/2013 and Nintendo have announced a WiiU and 3DSxl package for the game. The 3DSxl package includes the first black 3DSxl available in Europe, the WiiU package includes the WiiU console, Monster Hunter 3 and the WiiU Pro controller. The WiiU and 3DS will use the same save data for both consoles, meaning players can swap between consoles as they desire, whether playing out an about or playing at home on a big screen tv.

The WiiU and 3DS versions on Monster Hunter 3 will be released at the same time, with cross platform multiplayer and internet play on the WiiU console.

The 3DSxl Circle Pad was announced for easier and more compfortable control on your 3DSxl, giving a 2nd analogue stick for more precise gameplay.

Nintendo also announced some exciting Zelda news today, first off we heard about the Miiverse community for Zelda. This is a place for Zelda fans all over the world to hang out and discuss The Legend of Zelda with other like-minded fans.

Zelda: Ocarina of Time 3D is on sale for only £19.99 for one week only, if you haven’t already played this game, you now have no excuse to not buy this!

Zelda: Symphony of the Goddesses is coming to Europe in London, Paris and Berlin. This concert will include music from all the Zelda games and is something not to be missed if you are a big Zelda fan.

Castlevania, Lords of Shadow: Mirror of fate’s released date was announced as March 8th. This game explores the blood fued between the Belmont clan and Dracula in more depth as you play as 4 of the Belmont clan members. This combat focused game is not to be missed.

Fire Emblem: Awakening is getting it’s own 3DSxl logo console, which is only available in Europe. The console comes with Fire Emblem: Awakening pre-installed. The game boasts new classes and Nintendo announced that the first Addon content for the game would be released for free. Champion of Yor 1 introduces new maps and expands the main adventure of the game.

Fire Emblem: Awakening is released April 19th and with the first Addon content released for free, it’s worth a purchase.

Etrian Odyssey 4: Legends of the Titan is an RPG game available this Spring, more details are likely to come in the coming months.

Project X Zone is a tactical RPG which cameos characters from Tekken, Streetfighter, Devil May Cry and .hack.

Animal Crossing: New Leaf is announced with a release date of June 14th. The game boasts an improved multiplayer with streetpass and internet capability to visit friend’s towns as well as play new mini games. This game is said to have more to do than previous Animal Crossing games and as Mayor of your town, the town will adapt to your decisions in game.

Mario and Donkey Kong was announced for release in the 2nd quater of 2013. In this game Donkey Kong is not the enemy of Mario, but is infact opening an arcade with Pauline. The Nintendo Direct showed that user made content and a level designer will feature in this game, which we at VGU are very excited about.

From one big Donkey Kong news to another, Donkey Kong Country Returns 3D is a game being built from the ground up for 3DS. With only a summer release date announced so far, Nintendo are wetting our appetites with a 3D video which is available today on the Nintendo eShop.

We at VGU are extremely excited by everything announced in today’s Nintendo direct and will keep you updated of any more announcements and information as it comes.

This isn’t all that Nintendo had to offer us today, check out VGU’s Year of Luigi article to see why this sidekick character is getting an entire year dedicated to him!

With all these announcements from Nintendo today which are you most excited about? Which of these games will you be buying? Let us know in the comments below!