Dungeon Keepers and Dungeon Keeps 2 anyone growing up in the 90’s will remember the lovable RTS dungeon making game. The game was pretty simple, use your imps to mine out the rocks in an underground dungeon, build rooms, set traps and lore your enemies into them or entice them with gold while your monster sneak up to slaughter them, all while making sure you protect the “heart” of your dungeon. Grow your dungeon with more traps, monsters and craziness and in the end summon the devil to finish everything off.

Now the game can be re-lived in a very closely inspired game, War for the Overworld from the first few seconds screams Dungeon Keepers 2 and that is not a bad thing, the visuals are stunning but stick to the original style of the game and it has the same concept, build your dungeons, build rooms and traps but with all new traps, monsters, rooms etc. The game will be like playing a remake of Dungeon Keepers but under a different name.

Even Peter Moluniex original creator of Dungeon Keepers has said

So hopefully no problems with remaking the game if the original creator wants it to be done…hopefully. The team say they got their inspiration from games like Dungeon Keeps, Majesty, Overloard etc. but from what we can see it is mainly influenced heavily by Dungeon Keepers.

The Kickstarter campaign has ended at £211,371 over its asking amount of £150,00 but if you did want to donate, they are continuing to accept more donations on their website and all the extra money will go towards their stretch goals, you will also receive similar awards just like the Kickstarter backers. The current money raised through Kickstarter and their website totals at £224,417 and keeps on rising. 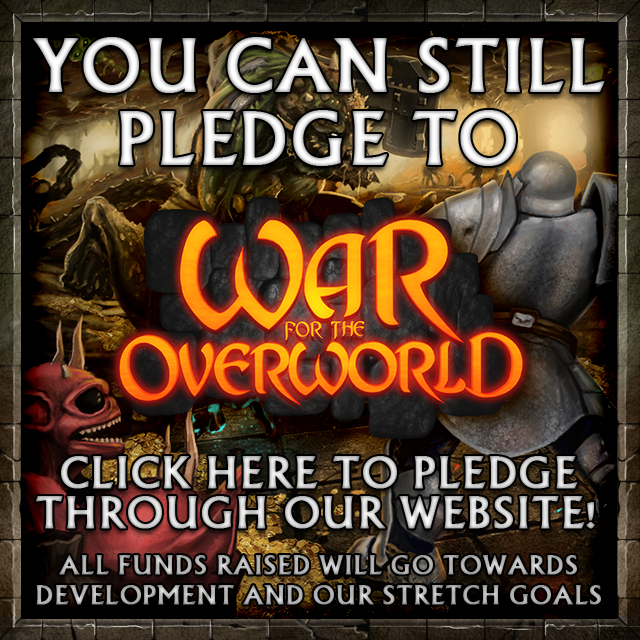 You can check out the Kickstarter campaign to see some good infoon the game or go over to War for the Overworld website to donate to make the game more awesome.

Personally I love the Dungeon Keepers game and seeing a closely made remake is great, I can not wait to be able to get some hands on time with this game and we should be able to provide you with a preview, so keep coming back to us for more news!

Fan of Dungeon Keepers 1 or 2? What do you think of War for the Overworld? Let us know in the comments.