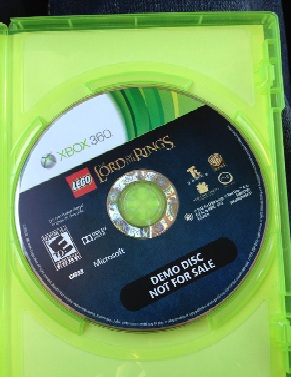 It’s been released that some copies of LEGO Lord of the Rings contain a disc labelled ‘demo disc’ instead of the traditional disc. Certain retailers have recalled the Xbox 360 version, which so far appears to be the only version affected by the mix-up.

A Warner Bros spokesperson released a statement saying that “the discs in question are incorrectly labelled as demo discs, but those discs do contain the full game content and are fully functional” which is good news for those who were unfortunately affected. They are also in the process of remanufacturing the discs and should be getting them into stores as soon as possible.

Above: The mis-labelled demo discs, which actually contain the full game

In the meantime, if you have got one of these copies you can contact their customer support via email at support@wbgames.com for a replacement!