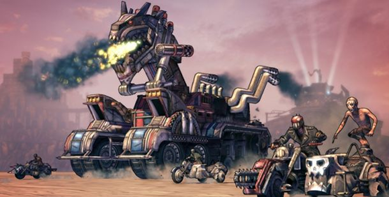 For those of you with a season pass it will probably have already downloaded, but for those of you who weren’t aware Mr Torgue’s Campaign of Carnage is available to download now!

With new areas to expore, three more achievements (for you achievement hunters out there), a whole new currency and loads of new missions there is plenty more to do in Pandora! Fan favourites such as Mad Moxxi and Tiny Tina will also make an appearance to add that extra portion of crazy.

The story revolves around a new vault that will only open “once the champion of Pandora feeds it the blood of the ultimate coward”, so Torgue sets up competition for challengers to come and conquer whatever waits in his Badass Crater of Badassitude. It features multiple bosses including the Badassaurus Rex (a “big crazy Torgue-themed robotic dinosaur breathing fire”) – pretty cool right?

Above: The Badassaurus Rex, the fire-breathing robotic dinosaur

The new currency is Torgue Tokens which you scavenge from fallen enemies and can be spent on obtaining badass Torgue guns, even offering a Legendary weapon every day as the Item of the Day.

With the second DLC coming out Gearbox already has ideas about the third instalment, eventually planning to raise the level cap but in a “more interesting” way. Available for 800 Microsoft Points and approximately £7.99 on Steam and Playstation it’s definitely something to check out!