The story of The Last of Us is not something we have not heard before, outbreak of something unexpected causes humans to become feral and attack other humans, if bitten they also become “infected” and change into the same thing that got them and the cycle is repeated. Now the first thought would be zombies but Naughty Dog have made it very clear the game is not another zombie game and the enemies within are not the undead horde. This game takes a very different direction to the post-apocalyptic games we have seen in abundance recently.

You play as Joel, a tired and rough around the edges man, who does the odd jobs around the quarantine zone to keep on living. He has seen the world both before and after the outbreak and along with the hardships of his past has done what he has had to, to survive. This has in turn made him emotionally closed off, practical and blunt. 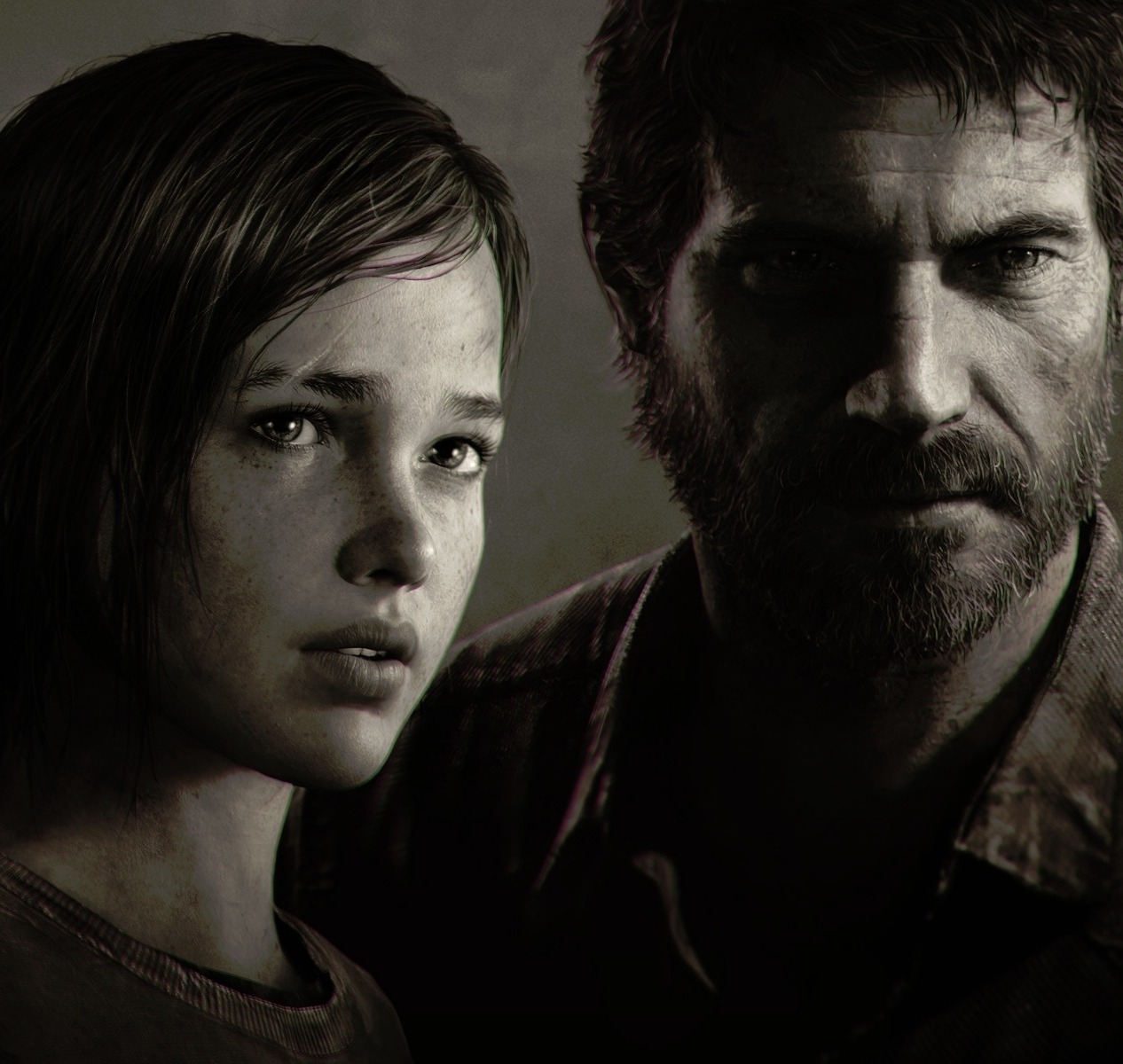 For reasons we won’t spoil, Joel has come into contact with a young girl called Ellie who was born after the outbreak and has the complete opposite outlook on her life and the world around her. Without the knowledge of the world before, the world to her is nothing new which gives her a spirited and vocal approach to everything around her with a childlike enthusiasm and interest.

Their journey is what makes the game something to remember, they are two complete opposite forces together in a unrelenting world. Joel sees Ellie as a burden and Ellie sees him as a stranger just taking her to her destination. The changes in their speech, language and interaction grow throughout the game, seeing the natural curve of this makes it feel very real. As their relationship starts to evolve Joel begins to take a liking to Ellie and he responds more about the world before the outbreak which Ellie is so fascinated with.

The one thing to note is that throughout the game both characters are very believable, you don’t really see them as digital being but more like real humans. They have their quirks, their good and bad points but they also grow and develop around you as you play the game. This gives a great sense of realness while you are playing which really hits home hard in the tense moments of the game. Playing The Last of Us, I never felt like I was Joel but more like I was watching his and Ellie’s journey over his shoulder, seeing their struggle in this harsh and brutal world. Even when you expect the worse sometimes the game can take you by surprise, in particular the use of silence in the game is done flawlessly. Years of predictable game play goes out the window, you never truly know when The Last of Us world is going to bite and this makes it terrifying yet beautiful and alive.

The infected are everywhere to be seen and heard, they have taken over the deserted ruins of the previous world. They are the human who have been consumed by a parasitic virus that causes them to sprout gruesome fungus and turn them into feral beings with no human remorse. As with most post-apocalyptic worlds they are not the only threat and sometimes not the most dangerous, humans that use the chaos and terror roam the wastelands as bandits and kill those they come across to take their supplies and camps. Even with this amount of devastation and madness Joel and Ellie do still have a few allies they can rely on but most strangers are seen as enemies; its kill or be killed.

Joel has seen many battles and can handle himself quite well in a fight but he is not immortal. Combat is something you will probably try to avoid most of the time unless you have a massive excess of ammo and resources and the number of enemies is not too high but these situations are rare. Combat is something that you have to always have to adapt to whether it is sneaking around taking enemies out quickly and quietly, attacking head on or even fleeing past the fights all together. Sometimes strategies you take might work in one situation but they surely won’t work all the time keeping the fights fresh and different but also makes them very challenging at time. Personally the difficult battles and my countless death were some of the best parts of the game. Being able to see where you went wrong and trying different tactics gave the game depth and made it frustratingly fun. Some will find this too much and might quit out of frustration and even on normal it is quite challenging.

Fighting is very dark and downright brutal; you feel every punch and see the force in every swing of Joel’s weapon as he smashes the head of an infected or bandit. However the violence never feels good or enjoyable but does play a massive part in the culture and attitude of The Last of Us world. You must do what it takes to survive even when it’s Joel grabbing someone round the head and smashing them head-first into the corner of a wall. Every fight feels like it’s to the death but something that was never chosen out of excitement or choice.

Different infected require different tactics and they require a completely different strategies overall to humans. They are quicker, relentless and unpredictable which makes them a serious threat and some infected like the Clickers have an annoying attack which is mostly unstoppable and will kill in one hit if you do not have the right tools. This can be overly frustrating as resources are limited and Clickers are plenty, meaning you can find yourself reloading the checkpoint over and over again to try and get past this over powered mini cut scene mishap.

The combat is not all fine and dandy, as the combat does revolve around third person shooting it has to the problem of becoming a cover based shooter, you find yourself shooting and hiding from cover to cover. Which for a game with such great depth in its story, world and evolution of the characters is a real shame. The games combat is fun and varied sometimes with the use of different tactic and stealth play is one of the best parts but once you are seen it just turns into quite a standard shooter. Ellie is one part which makes the combat more varied, she is not just a massive escort mission. She helps you by throwing bricks at enemies, distracting them and even stopping them from grabbing you. Later in the game she becomes even more useful with the ability to use weapons and she really feels like a companion you can count on. Even in the moments she does not help she is useful by shouting the location of enemies and pre-warning you of dangers.

The one thing Ellie can’t do is swim, this is something that the game does sometimes in between combat breaks, the parts where she is blocked by deep water become puzzles that Joel must complete. Most of the time it’s finding something Ellie can jump onto and then letting Joel move her to the next location. In the water Joel’s movement is not exact and feels much like you would in water; even underwater you can see him struggle in the deep waters but the controls can be quite hard to get used to.

It’s not all about action and combat, the game does slow down to the point where you can take in the detail and beauty of your surroundings. It also gives you time to scavenge for your supplies and resources for crafting and in these moments it is where you can pick up on the small talk between Joel and Ellie. In this breathing space from battle it shows how their relationship is building and every piece of dialogue and scene is unique to that location making them feel much more natural.

Environments are very large with many places to explore and some hidden areas you will only find if you take the time to deviate a little from the beaten path. Even though the game is linear, the level design hides this well making you feel like you have a lot of choice in a closed environment. The levels also complement the open combat with multiple ways to use the environments to your advantage which also includes height such as climbing a truck to see your landscape before starting your battle. With these things combined the linear game has sandbox elements making it feel more like a world and less like a straight line with Joel getting pulled along by the story.

A big plus for the game is its sound. In The Last of Us sound is a very integral part of the game play, you can use it to listen out for clickers or use it as an advance warning system for enemies lurking around the corner. Without the sound design you would be forever in “listen mode” where Joel can use his super hearing to see the locations of enemies, a helpful mechanics but not something that you can use in the heat of battle as it slows Joel down to give the illusion of him concentrating.The other side of its sound design is no sound at all, a lot of the time there is only the ambient sound of the world around you and sometimes you are graced with the special work of the orchestral sound of composer Gustavo Santaolalla.

Exploring your environments rewards you with ammo and materials which are limited in the game so looking around outside the line of game play does help you to survive longer and craft items to support your adventures. In your adventure you can also stumble across plants and pills, these are the resource used to upgrade your support skills such as more health. You can also come across training manuals which upgrade your support weapons like the Molotov cocktails damage radius.These are necessary functions in the games design but others such as infinite ammo in tense situations when normally you are counting each bullet doesn’t fit and breaks the horror or thriller atmosphere of the game.

Sometimes parts of the game were downright weird, the glitches faced while playing the game were plentiful on occasion. Rag doll physics going mad after enemies died, enemies disappearing and reappearing, dumb AI moments and a couple other little things happen during the play through. Luckily these were not game breaking but still breaks your immersion.

The bad points in the game were nothing major only minor glitches, a little too obvious story troupes or convenient level design and even these had to be really searched for. The Last of Us is a great achievement of current gen game design and really stands up as one of the best games in its generation for storytelling, character development and emotional design. You really do get invested in Joel and Ellie story, grow an attachment to them and are with them every step of their journey. I found myself routing them on even when I was the one controlling Joel, that’s how much you get invested. It a game where you can see the story coming to an end but don’t want it to and it is a game you will remember for a long time to come. A strong contender for the best game of 2013 and the overall life of the PlayStation 3.

For a game which is very cinematic it never forgets its foundation as a video game and makes sure you remember that through a combination of great storytelling, character depth, progression and emotional games design.

Filed under: PS3 Review The Last of Us