Xbox gamers can finally join in the rocket-powered football shenanigans as Rocket League bursts onto the Xbox One. Simple to pick up and play, Rocket League oozes charm and provides quick bursts of almost pure gaming ecstasy, whilst maintaining enough depth and skill to its mechanics to keep competitive gamers happy.

The first thing you’ll notice about Rocket League, even before you make it into an actual match is that it looks phenomenal. The futuristic sporting aesthetic and bold, contrasting colour palettes of orange and blue for the opposing teams, all combined with remarkable image quality make Rocket League quite the visual treat. Throw in the fantastic dance-pop soundtrack and you’ll do well to find a game that gives a better first impression than this.

There are a number of game modes to take part in, but these are all variations of the core concept; two teams of rocket-powered battle cars face off in an arena, attempting to score goals by knocking the giant ball at the centre of the field into the opposing team’s goal. The default game mode is online multiplayer, where you can search for games of one vs one up to four vs four. Matchmaking is quick and easy, even allowing you mess around in practice mode or the garage whilst you wait to join a game. If you’re not feeling up to getting smashed online, you can enter into either a one off exhibition match against bots or a full blown season where you and your team compete against others for the league title. These single player options are a nice touch and one people would be lamenting the absence of if they weren’t here, but in reality playing Rocket League against bots is a hollow and unrewarding experience. AI is notoriously difficult to nail down and Rocket League’s bots range from god awful to rocket-powered wizards depending on the situation. That’s kind of irrelevant though, the real reason the single player modes feel so lacklustre is because driving up the wall, bouncing off and scoring an amazing aerial goal is all for nothing if there was no one else there to see it. 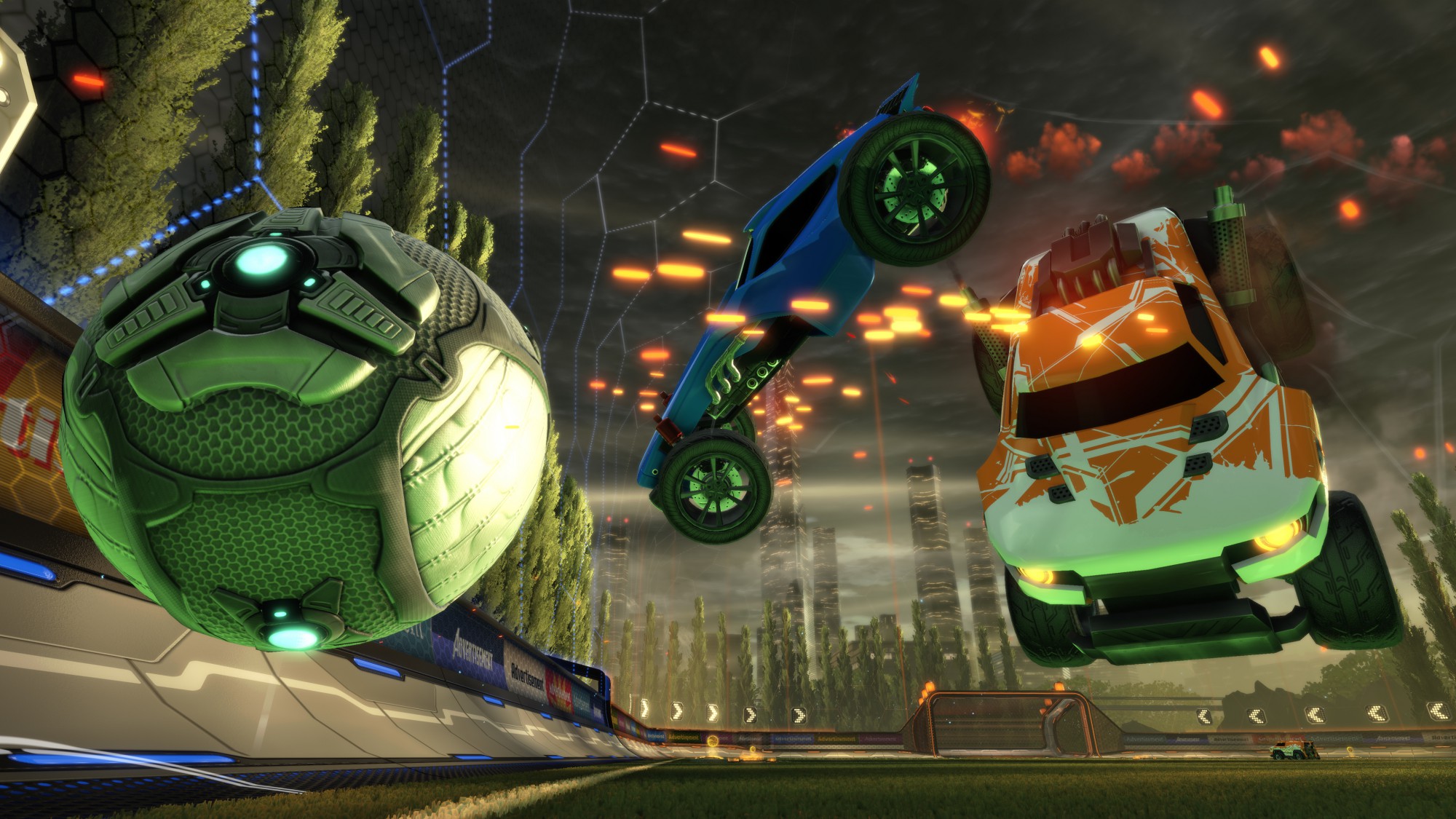 There is one single player mode for which I am extremely grateful though, the Training Mode. Here you can learn the basics of the game through three distinct training regimes: Shooting, Goalie and Aerial. You can work your way up from Rookie to All-Star by passing challenges which largely consist of testing your ability to hit the ball in a difficult spot, be it a shot heading straight for the top corner or getting on the end of a cross into the box. The Aerial modes are especially welcomed, as good aerial play is what separates the rookies from the pros when playing Rocket League. Learn to consistently hit the ball in mid-air and you’re already ahead of most of the field.

There are a good number of arenas to battle in, each with day and night versions and weather conditions which helps to keep things fresh. In reality the differences are almost entirely aesthetic with the field of play staying the same from map to map; the exception to this rule is the Mad Max-inspired arena where the outer edges of the map slant inwards, keeping play towards the centre of the field and away from the walls. Along with the various maps, there are a wealth of car choices and customisations on offer with decals, hats, flags and rocket trails all giving your car its own unique style. The Xbox One version comes with three existing DLC packs built in and several exclusive items including a Halo Warthog-inspired car, a Gears of War Armadillo-inspired car and a Sunset Overdrive Overcharge trail. These additions are a nice touch, but they’re only a balm to cover the scars of what has been ripped away in the Xbox version.

Whilst we’ve finally been invited to the party, the bouncer has directed us to a walled off section on our own as Sony and Microsoft refuse to play nice with each other. The result is a lower total playerbase for Xbox gamers to draw from, with the highest concurrent online players I’ve seen being around 60,000. That’s still a mighty fine player base to draw from and in reality I don’t see the smaller community working to Rocket League’s detriment too much. The previous success of the title on PC and PS4 has given it a certain acclaim and now it’s available on the Xbox One, gamers are snapping it up. With all that said, it’s very disappointing that Microsoft and Sony are still incapable of sitting down together and forming a deal for cross-play, even on a game-by-game basis. Microsoft are often touted as the ones who won’t allow it, but I suspect that Sony would be just as resistant to allowing cross-play between consoles too. Anyway whoever is behind this, stop it. 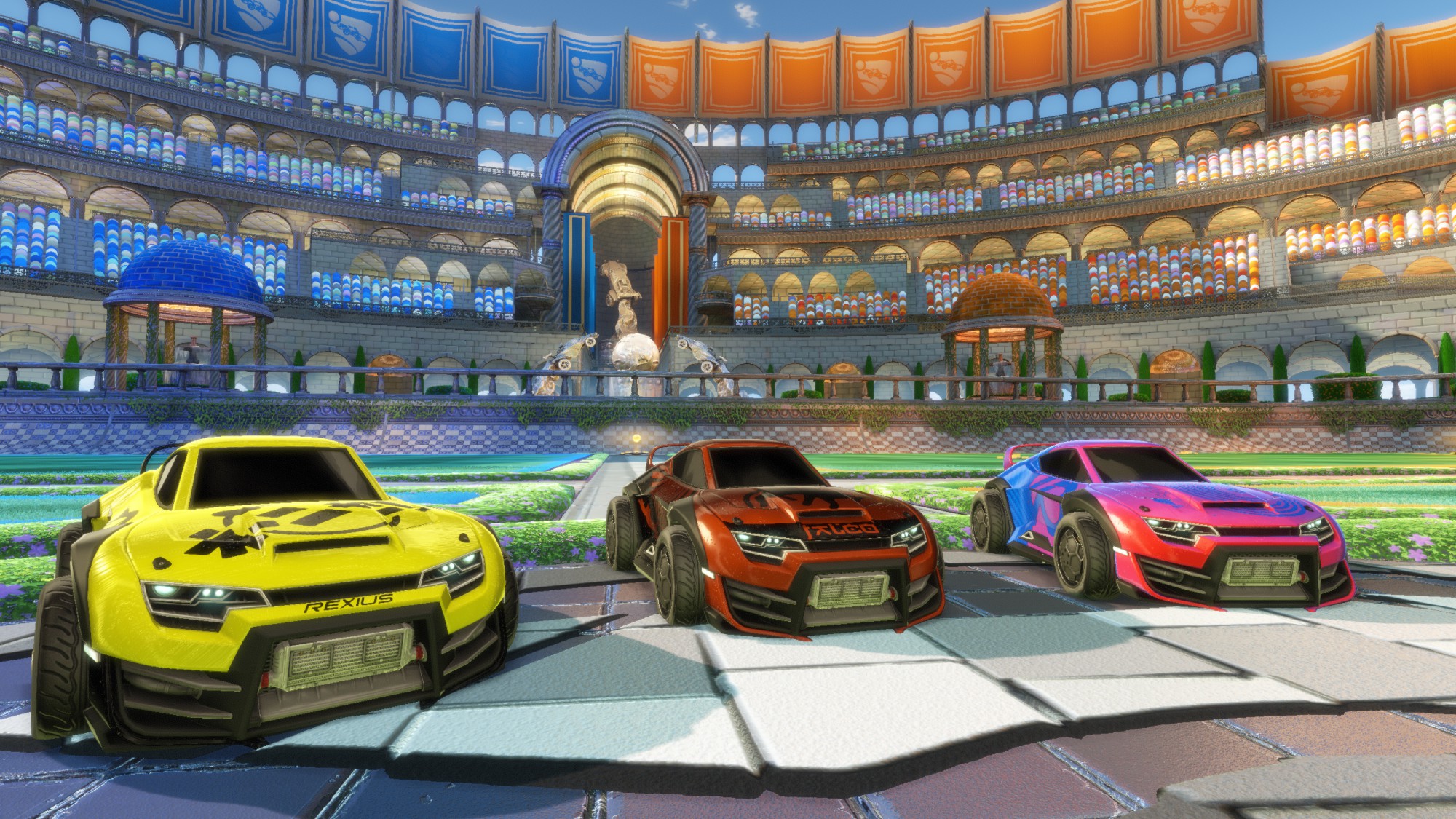 So far a pretty glowing review but it’s not all sunshine and rainbows though, as there are a few niggles here and there that are worth mentioning. There is a minute between matches whilst everybody votes to ready up which would be a perfect opportunity for you to switch up your ride, maybe add that new flag you’ve unlocked or pop on a top hat. Unfortunately, you can’t modify your ride in between matches without backing out from the lobby, a seemingly bizarre oversight in a game that rewards you with a new customisation item at the end of every match. The ability to choose a different rocket trail depending on your team would also be welcomed as some trails, like the Sunset Overdrive Overcharge only really match with one team’s colour palette.

The final complaint is somewhat subjective. Obviously Rocket League continues to be hugely successful on PC and PS4, even garnering its own eSports community, so take this as the ramblings of a filthy casual but I found my time with Rocket League to be a rather fleeting love affair. The core gameplay is outstanding and you’ll definitely get your money’s worth, but I found that after a couple of weeks I was just done with Rocket League. Its simple nature is part of its charm, but I also found the lack of depth in game modes left me feeling that I’d experienced everything I needed to.

Disclosure: An Xbox One review code for Rocket League was provided by Psyonix.

Rocket League is just as fantastic on the Xbox One as it is on PC and PS4. The wealth of customisation options, battle cars and arenas are icing on the cake, but the easy to learn, hard to master nature of the core gameplay is Rocket League's greatest strength and the source of its addictive nature, though for some this addiction may be a fleeting affair.