Poor little Luigi, he’s always trailing behind in the shadow of his brother, Mario. It’s always been like this, and you ought to think Luigi must be used to it by now. Luigi has had his time in the limelight, although it frightened the life out of him having to catch all those ghosts in his mansion.

Unfortunately for our green hat wearing friend, he’s found himself in the spotlight again, much like he did many years ago. Luigi’s been called upon by his old friend, Professor E. Gadd, for another round of ghost hunting. This time, the Professor needs Luigi to find the dark moon that has been shattered, with its pieces being spread all over Evershade Valley. Who knows what might have happened to it, but it’s down to Luigi to become the hero once again and find out. Luigi’s not going to like it though. As the loss of the dark moon has set off all of the ghosts in Evershade Valley and they’re out to scare you in any way they can.

When you first step into the game, it’s evident that it is quite different to the first Luigi’s Mansion game that was on the Gamecube. The magic happens from a bunker where Professor E. Gadd has set up shop. It’s the base of operations from which where thing happens in the game. It’s no longer one large adventure like the previous game; it’s all been split up into different levels. Not only that, this time around there are several different mansions that poor little Luigi has to go through to find those dark moon pieces. Each mansion happens to bring its own spooky style to the game so it never feels as if there’s any repetition to any of the levels. However the repetition does come with between each mansion when some levels feel a little similar to those from other mansions. It’s not a huge problem; the levels are still fun, and you’ve got a new mansion to complete the objectives in. 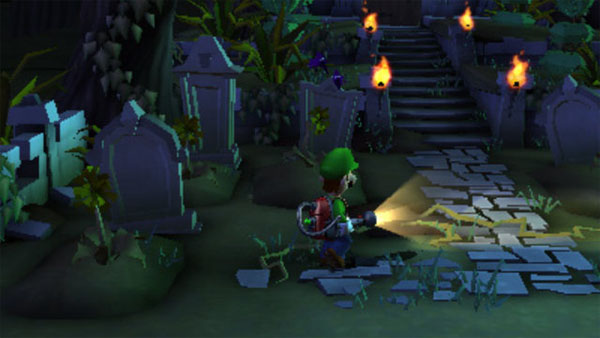 I can’t help but feel that the level structure keeps breaking up the magic. Just when you’re having fun and want to keep going, the level will end and you’ll be transported back to Professor E. Gadd with the Pixelshifter. This is a slight disappointment, but it provides a different style of gameplay. After each completed level you will receive an overall grade of gold, silver or bronze, based on factors such as time taken, health lost, ghosts captures, gems and how much treasure you have found. For the completionists among us, this is your opportunity to go back and snap up all the gold medals. It’s an important thing to collect as much treasure as you can. Not only will it help to increase your grade at the end of the level, but collect enough of it and you’ll be able to upgrade the Poltergust 5000 in a couple of different ways.

A new addition to Luigi’s arsenal for Luigi’s Mansion 2 happens to be a little something called the Dark Light. If something appears to be missing from a room, such as a painting, a door or an object, then the dark light will bring it back. This is the work of the Boo’s playing tricks on you, and they’ve hidden plenty of things within levels that can only be recovered using the Dark Light to lift their illusion. The boo’s themselves might also be hiding around in some places, so keep your eyes peeled and make good use of that dark light. It really is quite challenging, it took me quite a while to go back and find each and every one of them. The same is also true for the gems and hidden doors. They’re been placed expertly in the levels and will require a bit of thought to find all of them. 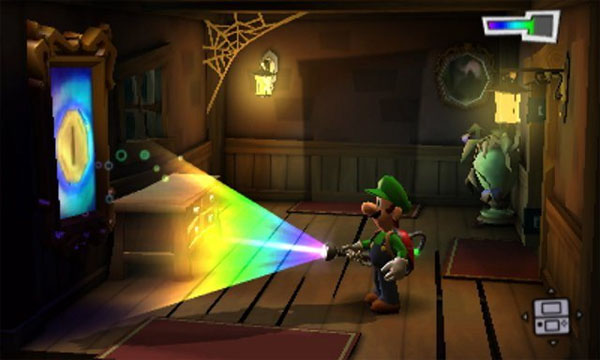 This shouldn’t really be that much of a problem for Luigi as he’s got the company of the Professor and the comical of wisdom that he provides through their communication device, the ‘Dual-Scream’, a device which looks just a little bit like a Nintendo DS. Awesome name, am I right? Every time you’re called on the dual-scream by the Professor, it plays a ringtone styled version of the game’s main theme. In fact, it’s so good; I would often leave it playing just so I could listen to it more (it’s now also my phone ringtone).

Luigi’s mansion also has a multiplayer mode which is actually quite fun. You and up to 3 other friends, or people online, can take on the haunted tower that contains up to 25 floors, depending on how well you and the other Luigi’s perform. This mode contains plenty of ghost-catching and it’s fun and exciting as you race against the clock to hunt down the unfriendly little ghosts. Every 5 floors will present you with a boss that will require every member of the team to pull together and take down, as they certainly aren’t pushovers.

The mansions all have a nice atmosphere to them and are complemented pretty well with their own theme’s that are a twist on Luigi’s Mansion’s main theme, much like the dual-scream’s ringtone. Not only this, but Nintendo have really pushed the boat out with a lot of fun and inventive gameplay. As the levels progress ,more and more of the mansions are opened up to you and you start to see how amazing they look, even if it’s on a small 3DS or 3DS XL screen. It’s the little things that bring the levels to life, like the design of the levels, the little bits of humour from both E. Gadd and the Ghosts and the sound track that glues it all together. 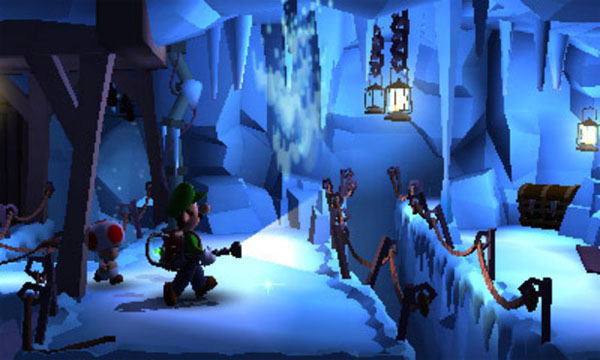 Speaking of ghosts, there certainly are plenty of those in the game, and Luigi has been tasked in bringing them in. To do so, the Professor has lined up the Poltergust 5000, an upgrade from the 3000 that Luigi used originally. This little gadget, along with its additions and upgrades, is all you really need to take care of those pesky ghosts. Luigi will, of course, have his trusty flashlight too and a combination of the two will ensure you catch the ghosts with no trouble. A quick flash of the torch at a ghost to briefly freeze it in place, then set the Poltergust 5000 on it to suck it in; it’s as simple as that. It’s extremely fun attempting to suck up the ghosts into the vacuum, as if catching a large fish in a boat with a fishing rod.

The ghosts in Evershade Valley come in all sorts of shapes and sizes but they all have one intention; to scare Luigi! However, Luigi is geared up to take them all on, even if he is a scaredy-cat. Although the ghosts will be scaring Luigi, it really just seems that they want to have a little fun. However, the same can’t be said for some of the ghosts you encounter later on, that’s a completely different story and you’ll have to find out for yourselves.

It must be said that Luigi’s Mansion 2 certainly is one of the 3DS’s best looking games. Being a first party title, Nintendo have pumped a lot of attention and detail into it and the overall result is amazing. From the sounds, to the look of the game, to the injected humour that works a treat and even Luigi, who plays the part of the frightened hero superbly well, all make for a nice little package that really shouldn’t be missed. I find Luigi’s Mansion 2 to be one of the best games on the 3DS, as it provides a lot of fun gameplay and humorous moments and keeps you hooked till the very end.