Dead Island: Riptide arrives after another emotionally manipulative trailer soaking the sands of a tropical paradise. With more zombies, weapons and tropical lands to explore, how does it stand up to the original? Is this second outing from Techland a trip to paradise or best left drifting afloat far from your TV?

Dead Island: Riptide takes place immediately after the first game, with the four survivors being imprisoned by the military and subjected to numerous experiments. Like in all good horror plots though, something goes horribly wrong and the protagonists are left on a new tropical paradise full of the angry undying.

Much like the first game the teaser trailer, full of emotion and sombre human moments, betrays the tone of the actual game. The game is full of bland dialogue, voiced by a cast either under or over acting in stiff and wooden cut-scenes. Characters like Sam B throw wannabe ghetto profanity in tones so exaggerated Jeremy Irons would blush.

This wouldn’t be such a sin however if the game didn’t attempt to tell a more in-depth story than the first. Over the course of the main narrative elements such as corrupt executives, forbidden tribal rituals and hidden pasts create a mishmash of various ideas that never full gel together to tell or say anything interesting. The whole thing comes off as a silly B movie, but taking itself too seriously to be funny. 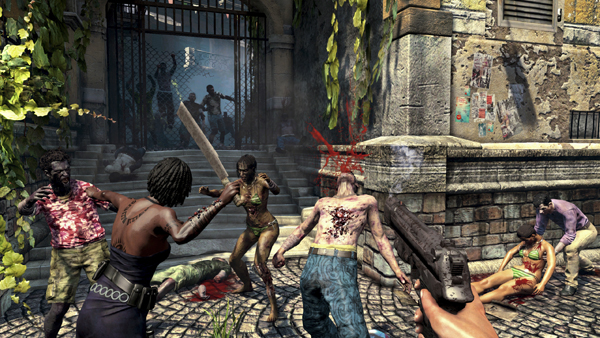 Those trousers are far worse than being undead

Thankfully Riptide plays to the strengths of the first game, giving an RPG co-op experience in a world populated by the no-longer silent majority. Thankfully the new tropical island to explore is just as sun-drenched as the last, after a short tutorial aboard a military ship. It succeeds in explaining the core mechanics of melee combat and fighting the flesh craving crowd shortly before crashing the players onto the golden sands of Palanai.

The majority of the game is spent going from quest marker to quest marker, talking to people, killing various forms of flesh-eater and collecting items. Melee combat once again takes centre stage with everything from wooden planks found on rope bridges, to electric gold-clubs being smashed through brain-stems. Combat is fast and intense, rewarding aggressive tactics to the common horde and careful consideration to the more unique variants.

Weapon mods and money to upgrade weapons is in ample supply, making the constant stream of upgrades come much sooner than in the original Dead Island. This makes the combat immediately more rewarding, with better blades, mallets and guns in no time. Using new weapons to remove chunks of living corpse, or splatter grey matter is constantly enjoyable. The system however has not been evolved since the first, giving a sense of déjà vuto any Dead Island veterans.

Sadly the quests don’t give as much positive feedback. Many involve simply going from A to B and back to A, and are usually vast distances apart. The more complex quests involve going from A to B to C or locating items in a larger area. It serves as a way to connect action scene to action scene, but more imaginative scenarios would have been a welcome change of pace from the usual trek from one dishevelled shack to another. 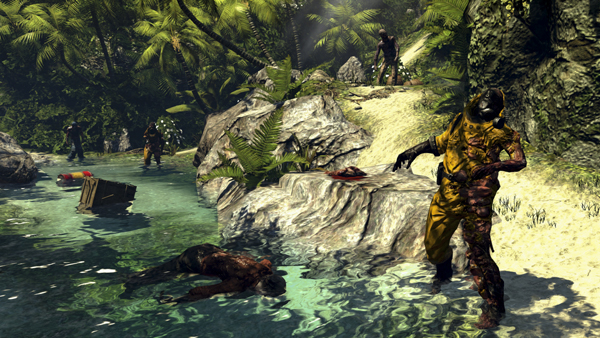 Come to Palanai, it’s to die for *du-dum tss*

The new idea of having a group of survivors to look after and upgrade adds to the fire. All of these tasks are accessed through the same menu that tracks all quests and can oddly only be accepted through this menu but must be redeemed in person. These tasks have character X ask for number Y of item Z. The rewards are generally improved stock in stores, or allies become better in combat during hub defence missions. These quests attempt to give motivation to scavenging items, but instead just becomes a vaguer version of a fetch-quest. Other new optional dead-zone areas offer the opportunity to find rare materials and mods, while facing off against numerous enemies and occasional boss characters. This challenge however is mitigated by exactly repeated environments for everyone, diminishing the sense of discovery.

Hub defence missions show up occasionally as the story allows as a horde style mission variant. Taking place in small arenas, waves of screaming monstrosities enter to attack both AI or otherwise. These AI members must be kept alive, but thankfully are capable of taking down numerous enemies and are easy to rescue when in trouble. The horde can easily single out and kill a player, but sadly death has little meaning. Upon death players are resurrected a few seconds later for a fraction of their cash a few steps from where they died. The abundance of cash and lack of any longer term punishment makes death irrelevant and a minor set back at most.

New enemy variants fill out the roster, such as Drowners that chase newly drivable boats. Larger types like the grenadiers and ogres appear occasionally that require serious fire-power or team-work to take down. The enemy spawning system raises issues in certain areas though. Particular hot-spots infinitely re-spawn certain enemies, which makes running the only option. This is especially apparent in city areas, making ignoring foes and running to objectives a more effective strategy than fighting. 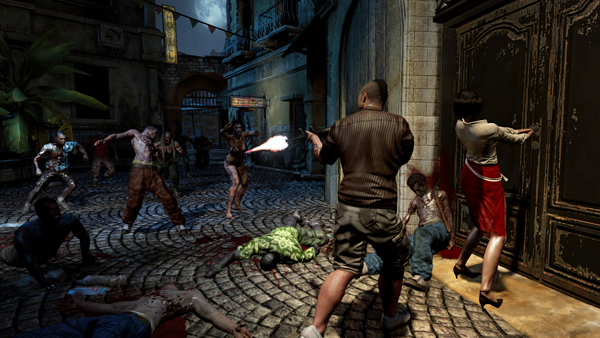 Why use guns when you have electrified gold-clubs?

Taking full advantage of the use of bloom and shadow, the locales often look good enough to want to visit if they weren’t covered in carrion. Sand shimmers and water gleams as the waves lap the shore, and dark jungle rivers under heavy canopy offer good contrast. Detail holds up well under close inspection, with heads and bodies exploding and breaking in gory detail. The environments are fun to explore with hidden nooks hiding weapons and components. It feels very similar to the previous games’ tropical world of gory wonder, which sadly works to the games detriment. It feels like an extension of the first games location, rather than having a unique feel of its own.

Sadly the engine cannot cope with its Techlands ambition, with muddy textures up close and heavy pop-in after load times. Constant jutters and frame-rate issues arise, especially during hectic scenes with multiple AI allies and enemies throwing down. This issue is always present, even during calm moments that shouldn’t be an issue.

Other graphical issues break any form of immersion that the atmosphere may have created. The new dynamic weather system constantly pops in and out without warning. A sunny, cloudless moment turns into a monsoon in a second, to turn into a cloudless monsoon, only to revert back seconds after beginning. All the weather changes is the filter on the screen, as well as adding a horribly looped rain sound that audibly skips every time it repeats. Motion blur is also used to worrying effect with sprinting, turning around and attacking makes the camera appear to be covered in grease which makes the action impossible to discern. Loading times are also rather rough, lasting upwards of thirty seconds for a small environment. 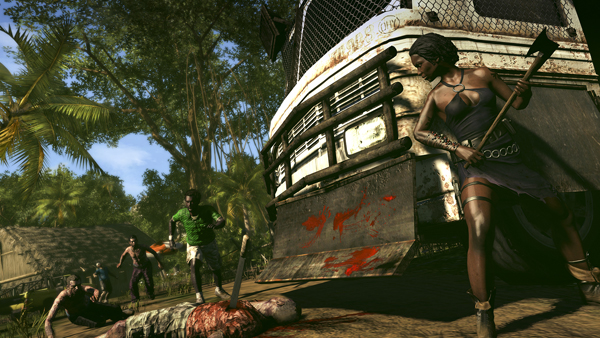 I think they know she’s there

Ever present moans and groans fill the environment, but the sound design is mostly barren. Jungles which should seem full of nature lack any sort of wildlife sounds. Music is rarely used in lieu of foot-steps and the gurgling sounds of cadaver fuelled creatures. This spartan design takes away from the atmosphere and could have helped to paint the world in a more crimson light.

While the game fundamentally works, the minor issues give a sense of rushed work. This along with the lack of general evolution makes Dead Island: Riptide feel more like an expansion than a new iteration of the series. The new ideas feel like more of the same, rather than give the game its own sense of personality. While issues such as the frame-rate and sound bugs may be fixed with patches, there is little in this game that really stands above the original. Perhaps next time Techland can make zombies to die for.