Trilogies are always difficult things to get right. You need to balance tying up plot threads, improving on aspects of previous installments while retaining enough to seem familiar. Dark Souls III has quite the act to follow, coming off the back of an incredibly successful deviation from high fantasy in Bloodborne and the disappointing sequel that was Dark Souls II. Miyazaki and his team have had to win fans over from both sides of the aisle, reassuring Souls fans that this final entry will be more like the now legendary Dark Souls while also bringing in a new crowd who are used to the hyper-aggressive playstyle of From Software’s Gothic experiment. What results from this legacy is the most accessible and streamlined Dark Souls, one where all the mechanics and design have been polished to a mirror sheen, yet it lacks that special something which pushed the original Dark Souls and Bloodborne into the history books. Pardon the pun but playing Dark Souls III is a hollow experience; it plays the part well but it doesn’t have enough of those glorious moments of surprise or triumph which lets it join its predecessors in the sun.

Starting out, Dark Souls III feels like the Dark Souls II that was going to be made if Miyazaki and the A team hadn’t got messed up in Gothic horror and transforming weapons. Dark Souls III is pretty much a direct sequel to the original Dark Souls and it makes this very clear, with players returning to Firelink Shrine as your main hub area. The hub feels like the accumulation of all the ideas From have been tossing around ever since Demon’s Souls, finally coming together in this one place of safety. It’s disconnected from the main world like the Hunter’s Dream and the Nexus, people take refuge and set up shop in the Shrine similar to Dark Souls and it’s the only place to level up your stats, linking back to Dark Souls II. However, the most important change to the Shrine is that your goal of collecting the five Lords of Cinder and bringing them to the Shrine is constantly hanging over you whenever you return back to base. Those five thrones are always there, eventually filling up with the bodies of deceased giants that you have felled as you quest through Lothric until you have finally united all of these former heroes under one roof. Unlike previous Souls games where your goal has seemed as distant as the cathedral looming over the horizon, the finishing line is always in sight when playing Dark Souls III and it makes play a lot more focused.

As a whole, Dark Souls III is the most streamlined game in the franchise, when it comes to both cutting away mechanical clutter and guiding the player in the right direction. You’ll rarely get lost as you travel through Lothric, partially due to there never being really more than one alternate area that you can go to at any one time. From an accessibility point of view, it’s a well needed change to stop hundreds of potential fans bouncing straight off Dark Souls III after getting lost on the High Wall of Lothric and never fighting the first boss. Miyazaki and crew know exactly what they want to do and where they want their players to go, but this streamlining does dilute the nervous trepidation that made exploring in the original Dark Souls so thrilling.

Rather than discovering a shortcut and rejoicing at finding a way back to a bonfire, you can quite clearly tell where a shortcut is going to be, due to the carefully placed lift or locked door right around the corner from the checkpoint. Areas snake over each other and eventually loop back round, rather than meandering into little pockets and possible new areas, meaning that any detour you make is pretty much guaranteed to take you back to the main road. It’s clear that Dark Souls III was designed to be ‘My First Dark Souls’. Players are given a fairly straight path for the first 10 hours, opening up a little for the next five before finally placing a trademark ‘fuck you’ boss to separate the wheat from the chaff. It’s not so much a difficulty spike as a difficulty sheer cliff, shown by the massive increase in bloodstains and doleful messages as you reach this area. If you soldier on, you will be rewarded with some of the greatest bosses the series has ever seen but this sudden difficulty jump will test every player, regardless of how ‘gud’ they think they are. Even as a dyed in the wool Souls nut, I was looking to my picture of our Lord Miyazaki and asking for his aid when I reached the later areas. 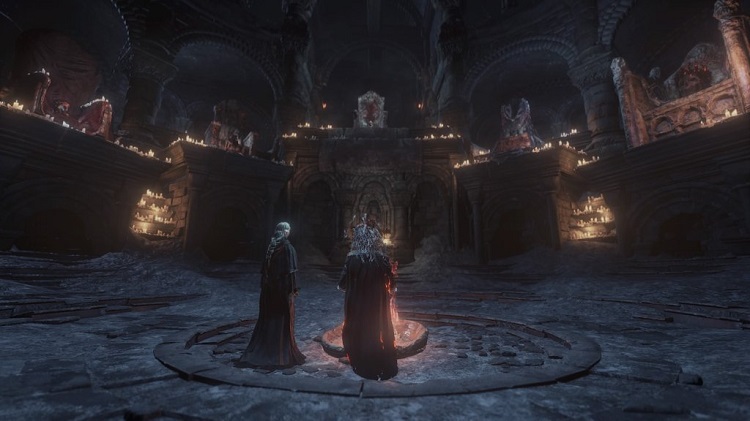 The Lords of Cinder are ever-present at Firelink Shrine, a constant reminder of your goal.

The overwhelming feeling is that this entry is ‘Now That’s What I Call Dark Souls!’, the last great compilation album of all the best tropes and mechanics before the series gets some well needed rest. You’ll have your trademark swamp, cathedral and catacombs area, complete with all your favourite enemies and a few familiar faces to tread that careful line between tasteful fanservice and sycophantic pandering. Some areas, like the Undead Settlement and the Boreal Valley are a bit too much of a throwback, feeling more like cut areas of Bloodborne which were almost finished but didn’t have those last bits of polish to fit in either the main game or the DLC. Pretty much all of the fan favourite weapons from the original Dark Souls come back, including about three weapons from Dark Souls II. In general, Dark Souls II references are absent, with most of the carryovers being from the original Dark Souls or Bloodborne. The Bloodborne influence is a double edged sword, as it has upped the general pace of combat but it has made some previously viable builds pretty awful. Playing a tank build as I usually do is so much harder now, as enemies having seemingly infinite stamina and can stunlock you very easily. Unfortunately, you cannot repay the favour as hyper armour only exists on a rare few weapons and even then, heavy armour does not grant you enough poise to shake off multiple attacks and continue swinging your giant spiked club. The combat is still that dangerous dance of rolling, parrying, shielding and spellcasting but in its desire to emulate the pace of its gothic forebear, Dark Souls III essentially makes a tried and true way of play almost useless. The new FP system is a great addition mind you, with both Weapon Skills and magic being tied to a shared Focus Meter which can be refilled with Ashen Estus Flasks. You now share your allotment of Flasks between these two variants, allowing players to sacrifice their ability to heal with their desire to use more skills and spells. It adds another element of risk/reward to the already very fraught combat system, but you can quite easily ignore it all together if you play strictly with normal attacks.

Being a sort of ‘Best of’ collection, it does mean there is a lot of recycled content in Dark Souls III, from the aforementioned issue of areas feeling like cut content from other games, to most of the weapon and armour sets coming straight from old installments. This stretches to NPCs as well, with many side stories and vendors being old faces just with different names. Your mileage will vary on this, as some will see these as welcome nods to the Souls legacy while I think it adds to the overall hollow feeling of Dark Souls III. Yes, it’s great to see an old face or to sometimes stumble on a recognisable area but it lends an air of tiredness to the whole world of Lothric. I suppose this is to emulate Miyazaki’s own tiredness with the series, being contractually obliged to not only make an end to the trilogy, but to fill it with enough fanservice and nods to the all-consuming lore of previous installments. When Dark Souls III does do its own thing, what results is some of the finest bosses and areas seen in series history (a certain climatic duel in the clouds comes to mind) but when it trots out another puzzle boss or we see yet another recycled enemy, it reminds the player with an all too forceful wink and a nudge that it is definitely a Souls game.

The online system is the best it has ever been, with the new covenants shaking up the traditional co-op/invader dichotomy more than the limited Rat covenant in Dark Souls II. The new Mound Maker covenant is the star of the show here, allowing players to skirt that line between invader and companion, by giving them the ability to both kill enemies in the host’s game and to suddenly turn on their partner at will. There is greater scope for PvP, with certain items allowing up to 6 players fighting at once in a host’s world, leading to some absolute chaos in high traffic areas. The only problem is the horrendous matchmaking, where it will take you about 12 separate tries to actually find a co-op partner you can summon. When it works, it’s pure magic but in the time it takes to find a partner sometimes, you’re better off trying to kill the boss another five or six times.

By all accounts then, Dark Souls III should be the pinnacle of Souls. It successfully builds on every aspect of the series, ties it all together with familiar characters and tops it all off with the best online suite From has ever put to disc. So why does it feel that little bit off? When everything is brought together in the minute to minute exploration of Lothric, Dark Souls III feels like a tribute act rather than the real deal. Mechanics don’t quite gel the way they should, the world feels more like a theme park dedicated to the idea of Dark Souls, one that so nearly gets it right but fails at the final hurdle. It’s frustrating as there are so many tantalising glimpses of what made the original so legendary, but they fade into the aether just before you can grasp them. Make no mistake, Dark Souls III is still an excellent entry into the series and it is the definitive one to get if you want to introduce someone to Souls but it lingers just at the foot of being a modern classic through its tiny errors and missteps. I suppose it’s only fitting that From Software ends a series about the cycle of life and death with a bittersweet finale.

The most accessible Souls game to date, Dark Souls III brings all the best elements of the series together but doesn't quite make them all interlock. It is still a fantastic RPG, one that puts many others to shame but it just misses out knocking the original off the throne.