The actors are ready, the rubber suits have been delivered and the pyrotechnics are armed. Is Behold Studios’ Chroma Squad a rip-roaring sentai simulator, or should this strategy RPG be condemned to obscurity like so many bad Power Rangers knockoffs?

I previewed Chroma Squad back in the early stages of its beta and it is very clear that the game has come on leaps and bounds since its beta release. Menus have scrubbed up well, my previous complaints about the battle UI lacking information no longer apply and Chroma Squad’s general presentation has been given a new lick of paint. Seeing enemy health bars, their stats as well as your own health is less of a chore now, with everything being displayed clearly on screen and not hidden behind a load of battle pop-ups. As for the actual combat itself, it works as a great introduction to the world of strategy RPGs. In the combat part of Chroma Squad, missions are split up in anywhere between 2 to 5 mini scenarios, where players may have to defeat a boss monster, hold out for a certain amount of turns or destroy certain structures as quickly as possible. Along with these mini scenarios, players have Director’s Instructions to complete which are side tasks which award you with more audience points. You have a constant track of your audience points at the top of the screen and it is imperative you collect as many points as possible. Getting a high audience point score translates into more money and more fans for you to use once you finish filming an episode.

When you start your journey into the world of super sentai filmmaking, you must pick your actors and the roles that they play. These starting choices are incredibly important as once you pick your actors and their roles within your multi-coloured fighting force, you cannot change them. Each actor has their own set of bonuses which will gel with a certain role within the squad. For example, an actor who has bonuses to their skill regen would be good as an Assist while an actress with a bonus to movement range would make a perfect Scout. Picking a bad actor line-up at the beginning of a campaign can spell ruin for later on so make sure you pick your furious five very carefully. In combat, each actor’s role gives them a unique skillset, ranging from the Lead who is a general all-rounder and is a great pointman whilst attacking, to the Techie who is built to debuffing the enemies and sniping them from long range with a gun made from toilet paper tubes and gaffer tape. You are slowly introduced to more and more character skills as you progress through seasons of your show, with every season unlocking new items to buy in the shop, more materials to use in creating your actors’ arsenals as well as additional character abilities which can be easily swapped out between each episode. Chroma Squad rewards you for actively switching up your character skills and trying your character a different way between episodes.

You also have special kaiju battles, which usually happen at the end of specific episodes. Like your actors, you can upgrade your mecha with different weapons, helmets and armour pieces to increase their defence or give you new skills in battle like a high-damaging chest laser or a forcefield that can stop enemy debuffs for a few turns. In these battles, there is no moving of your units or worrying about teamwork attacks, this is a much more simplistic battle system, very similar to the Giant Battles found in Bowser’s Inside Story. You chain normal attacks together, which increases their power but lowers your accuracy, meaning you have to gamble between going for more attacks and getting that high damage modifier so your laser sword finishers definitely kills, or cashing out your combo to get higher defence or increased health regen at the end of your turn. You also can defend against enemy blows very similar to the Mario and Luigi games, with timed mouse clicks increasing your defence and allowing you to last that little bit longer. However, due to the lack of any real complexity in these battles and the fact that the kaiju that you fight are just bigger versions of boss monster that you fought on the ground, makes these mecha fights become stale very quickly. 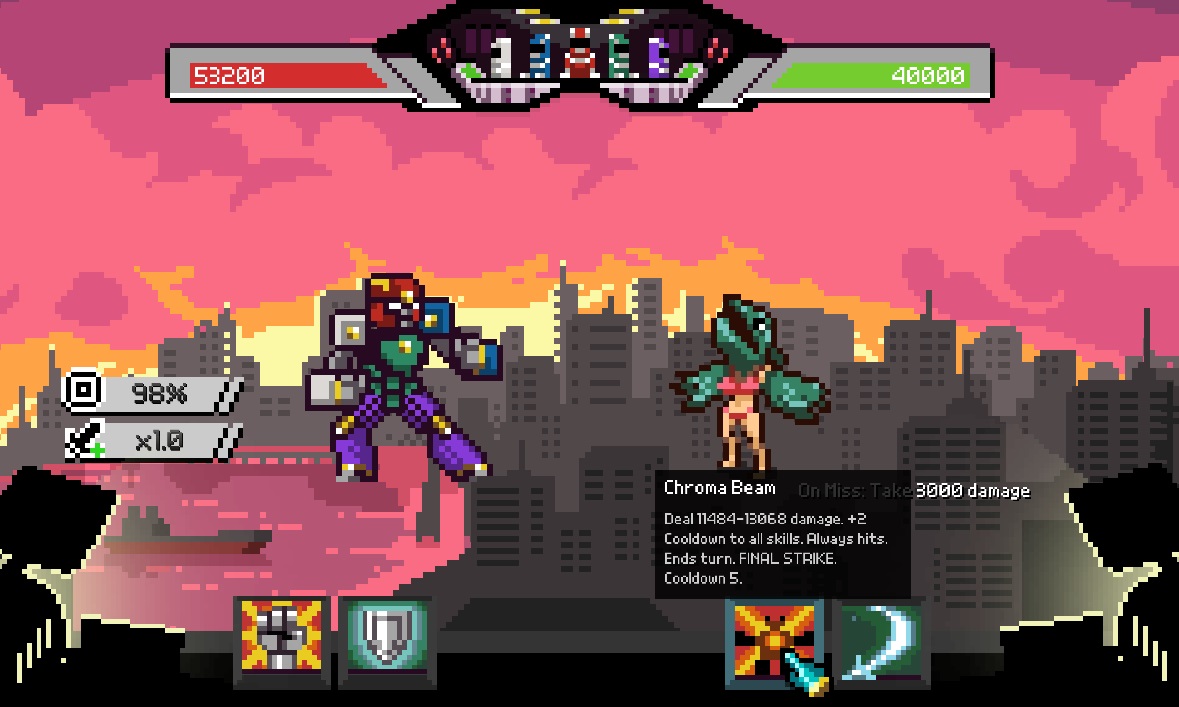 Yes, I am currently fighting a giant bikini-clad fishwoman.

While Chroma Squad does a great job in slowly introducing new character skills and gradually ramping up enemy and mission variety, it does not do a fantastic job at explaining its core systems to you. Even into season 4, I was still unsure how to make squadmates in the Teamwork mode joining in on a weapon attack or if there were more Finishing Moves than just the one you get for putting 4 actors in the Teamwork stance around an enemy then launching one big assault. A small in-game glossary of attacks and status ailments would go a long way into getting rid of much confusion experienced in battle. However, there is no fear of being overwhelmed by the sheer amounts of mechanics being thrown at you at once. Disgaea this game isn’t, so there is no need to grind your squad up for hours on end or worrying about min-maxing your character’s stats in order to defeat a tough boss. As I said earlier, Chroma Squad is a fantastic starter game if you wish to get into strategy RPGs, but are sometimes overwhelmed by the hundreds of stats and items you need to juggle in order to create a perfect spandex-clad team.

Moving on from the combat, the management side of Chroma Squad is surprisingly deep, with wannabe studio managers having to balance how your show is being marketed, with your internal budget as well as the general state of your set. Players will have to contend with random emails from fans or shady business owners, with certain responses giving you more fans or maybe a bonus weapon for one of your actors to use. Along with buying new recording equipment or a better green screen which could give you bonuses in battle, you have to manage your Fan Power as well as your stockpile of rubber suits and paint to make new props. By accruing lots of Fan Power, you can then spend this with the marketing firm you pick every few episodes to gain more bonuses in and out of battle like increased drop rates, better conversion rates when it comes from turning Audience Points into cash and even improvements to the health of your Mecha during kaiju fights.

While all these variables are fun to tweak, you are making money hand over fist by about season 3 and you quickly realise that it is raw materials that are the real hot commodity in Chroma Squad, not cash. Due to the fact that you can’t rerun episodes that you succeeded on, there is no reliable way to collect materials to make that new spear or that sweet looking helmet, without blowing your money on randomly-generated material packs. Too many times have I wanted to get some polyester to create a new body suit for my Assault, yet I have been screwed by the game’s random drops and ended up with 5 pots of glitter instead. It gets to the point that you are completely ignoring the items in the shop and just spending all the revenue you get from an episode on trying to get enough planks of wood to make a drill arm for your Mecha. Moreover, Chroma Squad has it so most crafted items have some randomised stat element to them, meaning you can make that next tier weapon only to have it have lower overall stats than a weapon two tiers below it. You can then recycle your equipment to get some of the reagents back but again, you are leaving it up to RNG and just hoping you get something back. 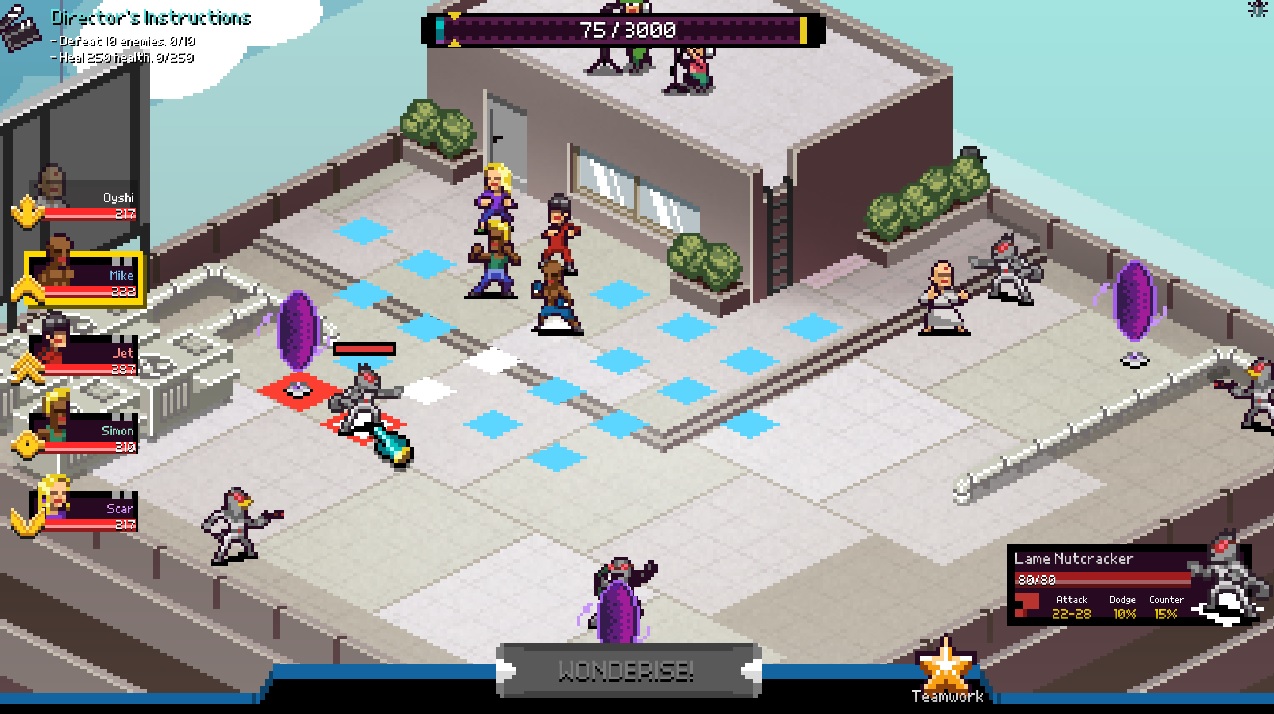 As you can see by the bottom, my Sentai team is a tribute to another team of multicoloured fighters.

Story wise, you aren’t expecting razor sharp wit or especially effecting dialogue. It is very much like a real sentai show in that you’ll see the plot twists coming a mile off but you got to see a giant TV get beat up by a multi-coloured mecha so you don’t mind. The dialogue can become just a little too cringeworthy at times, either being reliant on memes or bad puns to make a joke, or being just badly written but you will forgive it as I doubt you are here for a mind blowing narrative. You want to beat up squirrel men with swords made out of cardboard. As for Chroma Squad’s overall aesthetic, the pixel art is very well done if a bit simple, with there being loads of cool little nods to other sentai shows dotted around certain maps or tweets from fans popping up at the end of each episode. You also have the ability to name your character’s show, as well as the phrase they shout when they transform into their multi-coloured alter egos. This is nothing earth shattering but it is a powerful little touch for making you feel like you have really made your own squad in game. As this game was Kickstarted, you also get the occasional mission with a backer appearing as a guest star which is a fun little addition but again, these encounters do more often than not, suffer from some either overly-long or badly-written dialogue.

There is also the issue of some attacks having some really lacklustre attack animations. Either there is a piddly little explosion when someone throws a grenade, or characters don’t quite match up with an enemy’s attack. These may add to the game’s ramshackle motif of a bunch of down and out actors creating a sentai studio from the ground up but from a presentation standpoint, it just looks sloppy. Chroma Squad’s OST is fairly catchy, with some of the battle themes being especially funky. The main menu music when you are on the Management screen does start to grate after a while, which does not help if you are already irritated by the game’s annoying random item pack system.

Overall, Chroma Squad is a very successful attempt by Behold Studios to blend the childhood dream of being a Power Ranger, with the tactical experience of a game like XCOM. It may be a bit too simplistic for some, both graphically and gameplay wise but there is still fun to be had if you are a fan of sentai shows and/or strategy RPGs. You should break out the spandex for this one.

While it may not be the most complex SRPG, Chroma Squad is a sincere love letter to sentai shows whilst also being a great starter SRPG for those wanting to get into the genre. If you like explosions, cheesy dialogue and mecha fights, you better suit up.