EGX Rezzed has come and gone, with indies from all four corners of the gaming world coming to show off their games to an eager audience. Here are three of our favourites from the EGX showfloor, which include happy go luck snakes, chefs burning soup in space and brightly coloured samurai duelling to the death. We’ve already discussed Bears Can’t Drift!? and Seraph, with features about PSVR and The Banner Saga 2 on the way so keep your eyes peeled for more of our findings from EGX Rezzed very soon. 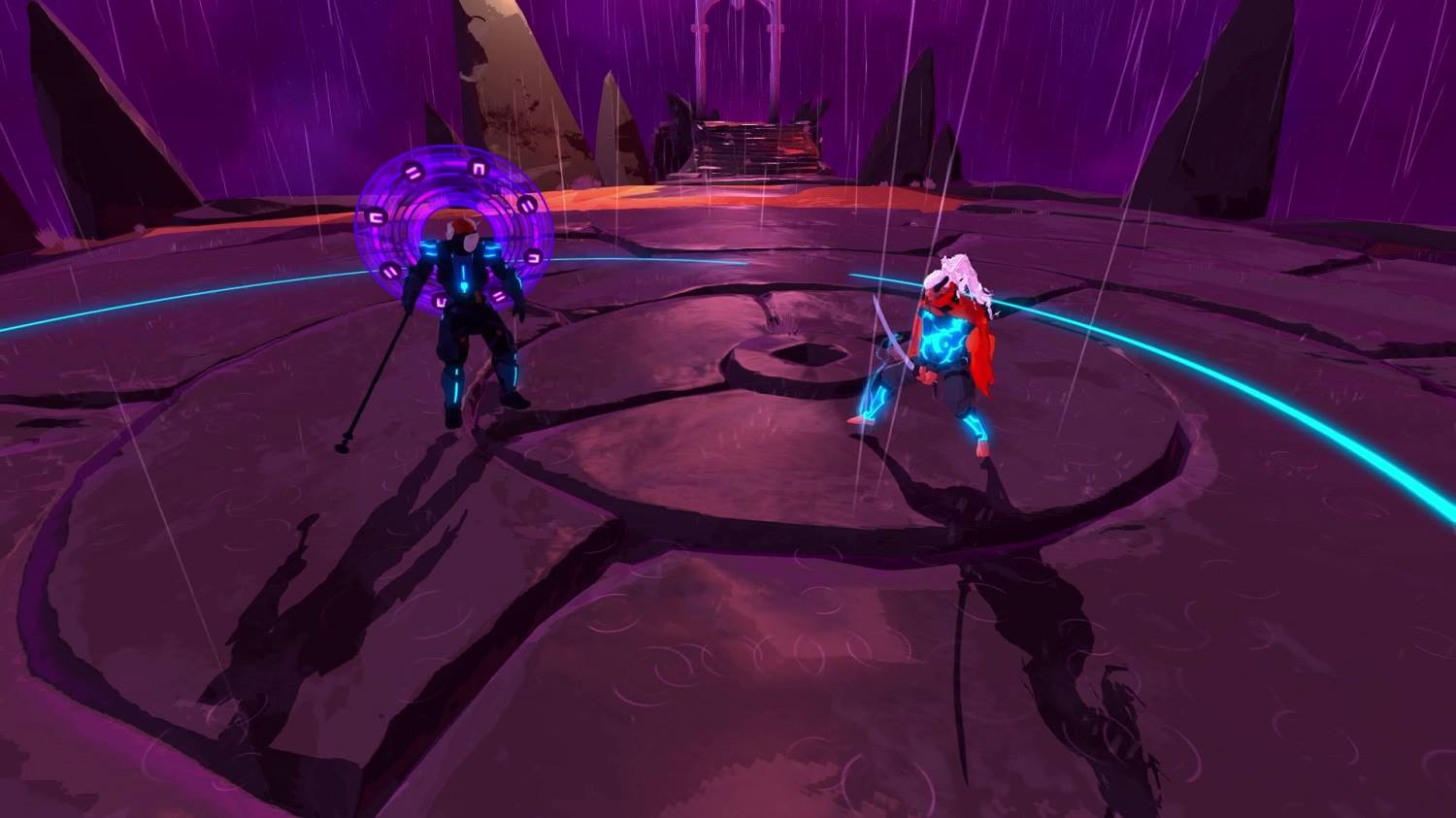 Starting off with something fairly intense, Furi is a boss rush game, in the style of something like Titan Souls and Jotun but instead of fighting giants or gods, you’re duelling similar sized enemies that happen to be multifaced techno warrior monks that spew thousands of projectiles across the screen. In Furi, you are a warrior who is freed from his prison by a mysterious man in a knitted rabbit outfit. In order to escape his confinement and gain freedom, he must fight through a series of jailers, who will attempt to stop you in a series of duels which involve dodging, parrying and slicing through insane numbers of projectiles and attacks in order to win the day. The demo had me fighting the first boss, the aforementioned techno-monk in a four stage fight where attacks would range from simple sword slashes to waves of lasers that I had to time my dodges through in order to land a hit. The core movement is very similar to something like Metal Gear Rising, with your basic defensive moves being either a dodge or a parry, where parrying a strike lead to massive damage as well as you gaining some health back if you performed a perfectly timed one. There was also a phase system, where you’d run around the whole arena doing little bits of damage to the boss before finally zooming into a sword duel once you had done enough damage, turning the battle into a more traditional one on one fight.

The combat struck that balance between force and elegance, with fast dodges often rewarding the player with an opening to land multiple strikes on the boss before safely retreating away to read the next strike. My only criticism with the demo is that not only did I never really drop below full health, due to the lenient perfect parry timing and the ease of finding health pickups around the arena, but the boss itself had way too much health. It sapped some of the demo’s intensity, feeling more like a war of attrition rather than a deadly duel where the momentum would rapidly swing between me and my enemy. This may have been for the sake of the demo, so more players could have a chance at defeating the boss but I would like to see the boss having less health in order to keep the fight’s intensity constant rather than it dropping off by the third phase. If you are into spectacle fighters or boss rush games, Furi is worth a look when it comes to PS4 sometime in the summer. 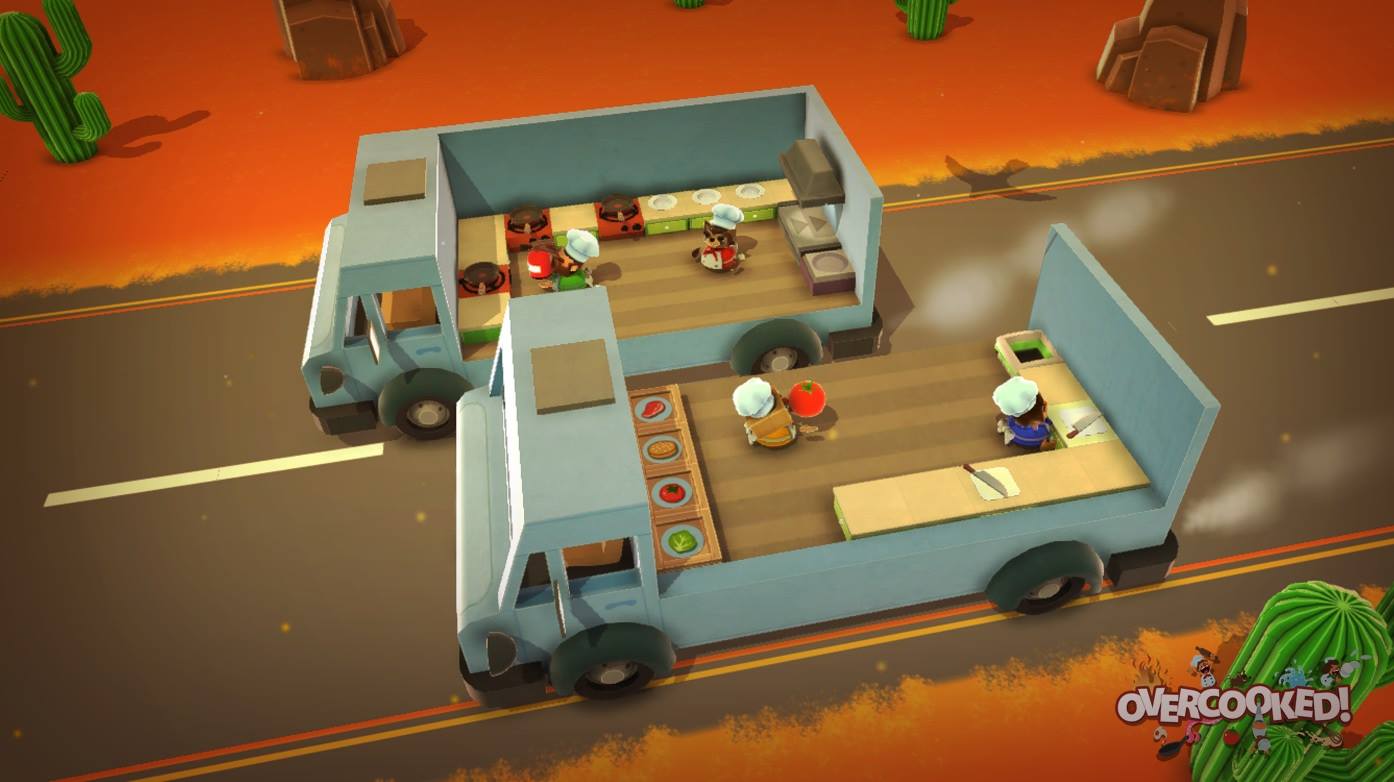 We now move from slicing through bodies to slicing through vegetables with Overcooked, a four player co-operative cooking game where players must work together to serve food on time in a series of bizarre locations. In the demo we played, we were only serving soup but in the full release, cooks will be making burgers, burritos, salads and pizzas to serve to their hungry patrons which requires juggling even more ingredients and stages to serve a perfect dish. Rather than most local multiplayer games where competition trumps co-operation, Overcooked really requires players to work together as not working as a team will result in burnt food and plenty of angry customers. There are competitive elements in the side mode but the main campaign has cooks co-operating to achieve an overall high score, rather than individual players being rewarded for separate tasks. The demo started off fairly normal, with us being tasked to prepare soup in your standard restaurant kitchen. This required one player to chop all the vegetables, another to bung them all in the cooking pot and check it didn’t boil over, while another to plate up and clean the bowls. Orders would appear on the top of the screen, ranging from onion to mushroom to tomato soup, with timers ticking down until the order was missed. Service would start fairly calm but if your resident vegetable chopper did not supply a steady stream of veg or if you let a pot catch fire, it would hold up the whole queue and cause everyone to descend into a mass panic as you had to put out a raging mushroom soup blaze. Later stages can panic you even further, as you have to serve food in the back of a moving lorry or in a space station where cooks are split up and food must be transported between kitchen quadrants through special moving rooms. I can already predict players coming to blows over one lazy chef not keeping an eye on the pizza in the oven and causing the whole kitchen to go up in smoke.

As a break from the usual competitive local co-op offerings you see at indie shows, Overcooked looks like a super enjoyable party game that actually rewards a well co-ordinated team rather than one player carrying everyone else through a team experience. The cartoony visuals are a plus, with all humanoid chefs looking like the Swedish Chef from the Muppets and other characters being equally silly like a hedgehog with a chef’s hat in a wheelchair. There is also a dedicated swearing button which is perfect when the heat gets a little too much. At the moment, Overcooked is strictly offline co-op which could hurt initial sales but if it gets the support at launch, it may introduce online cooking at later date. Overcooked is scheduled for PS4, PC and Xbox One sometime in 2016. 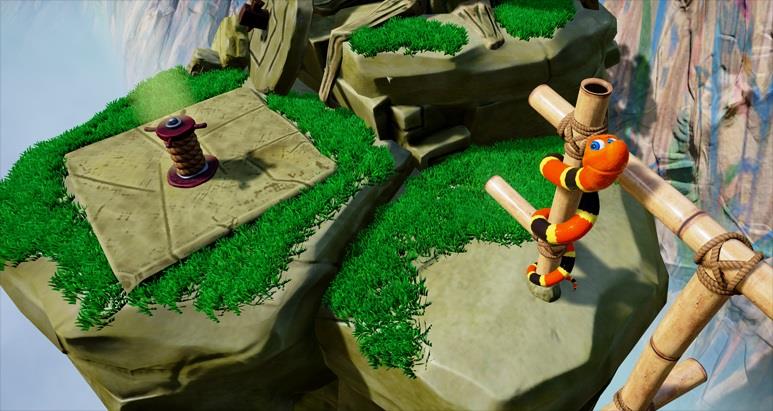 Keeping with the cartoony look, next up is Snake Pass, a puzzle platformer developed by Sumo Digital as a result of one of their internal game jams. This platformer is still in very early development, with it only being three months from its inception and as such, the demo on show was just a playground area to show players how Snake Pass’ movement mechanics worked. You take the role of a very emotive snake, whose goal is to wrap around five spindles placed around this playground in order to unlock his hamster friends so he can give him an incredibly friendly and not at all sinister cuddle. To move the snake around, you’d hold down the right trigger and rock the left stick left and right to simulate the undulating motion of a snake. You could then raise your head with the A button, allowing the snake to coil over and around objects by having the player spin the stick to wrap your body around bamboo poles and other obstacles. Once wrapped around an object, you could hold the left trigger to constrict your body, so you could can better grip onto a surface to plan your next slither.

It sounds incredibly complicated at first but when you are hands on with said snake, the controls feel natural and you’ll be wrapping yourself around poles in no time. It helps that the snake gets a bigger smile on its face the higher you climb, just to have it contort in horror as you fall to the ground, making the act of failing one part annoying, another part humorous. The Banjo-esque artstyle and the bouncing soundtrack made playing Snake Pass like transporting yourself back to an incredibly polished N64 game, collecting golden eggs and enjoying the act of moving a silly anthropomorphic animal around a lush world. It is still very early days for Snake Pass, with Sumo Digital debating whether it will be a standard level based platformer or a Metroidvania with your snake gaining extra skills as it climbs higher through the world. The snake could change colour to attain new abilities or eat specific animals to grow in size and shape. Whatever Sumo Digital decide to do for their first original IP, I cannot wait to see more of it.

There were plenty more games on the showfloor worthy of note but to list them all would be a herculean task for anyone. Honourable mentions go to Strength of the Sword Ultimate, Manual Samuel and Tricky Towers as being some other indies to watch out for soon. If there are any other indies that you saw on the Rezzed showfloor that you think we missed, comment below and tell us your favourite.